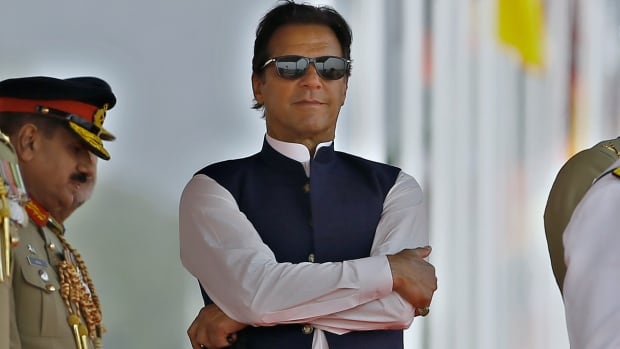 Pakistani Prime Minister Imran Khan suggested on Saturday that he might not accept a vote to oust him, a move he alleged was being orchestrated by the United States.

Opposition parties say Khan has failed to revive an economy battered by the coronavirus pandemic or fulfill promises to make his government more transparent and accountable, and have put forward a no-confidence motion due to be voted on on Sunday.

“How can I accept the result when the entire process is discredited?” Khan told a select group of foreign journalists at his office. “Democracy functions on moral authority — what moral authority is left after this connivance?”

“The move to oust me is blatant interference in domestic politics by the United States,” he said, terming it an attempt at “regime change.”

Khan has already lost his parliamentary majority after key allies quit his coalition government and joined the opposition.

Hours before he spoke, the head of the army, Gen. Qamar Javed Bajwa, had said Pakistan wanted to expand its ties with Washington.

No calls to Khan from Biden

US President Joe Biden has not called Khan since taking office, but the White House has denied that it is seeking to topple him.

Bajwa told a security conference in Islamabad that “we share a long history of excellent and strategic relationship with the United States, which remains our largest export market.”

He noted that Pakistan had long enjoyed close diplomatic and business relationships with China, but added: “We seek to expand and broaden our ties with both countries without impacting our relations with the other.”

The US embassy in Islamabad did not immediately reply to a request for comment.