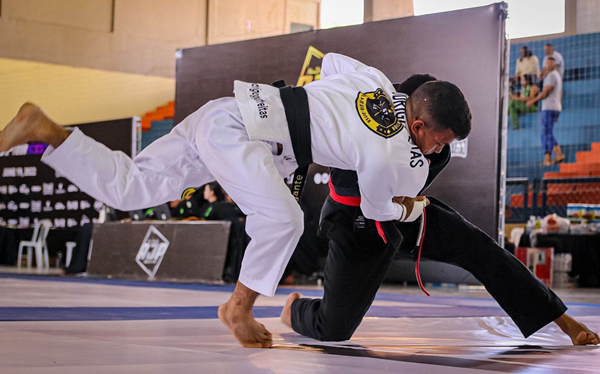 Athens (WAM)
The Abu Dhabi Professional Jiu-Jitsu Association has recently managed to hold 4 world championships, in 3 continents, in just 3 days, in Portugal, Greece, Brazil and South Korea, with the wide participation of male and female players in different categories.
This is in line with the major role played by the Jiu-Jitsu Federation and the Abu Dhabi Professional Association, as the UAE is the largest and most important developer of sports at the global level, and the association has more than 100 championships around the world . world annually and matches them all with the approved international classification, to award annual rewarding prizes to owners. Place first in each of the categories in the annual red carpet celebration of the annual Abu Dhabi World Awards.
The Portuguese Championship was held for the two categories of the suit and without the suit, with the participation of 489 male and female players from 24 countries around the world.

In the general classification, Portugal was crowned first with 51,300 points, Brazil won second with 22,750 points, Spain took third with 4,400 points and Nova Yunao Academy finished first for the shield of the best academy participating in the tournament with 2,200 points .

The Greek Championship concluded with the participation of 495 players from 25 countries around the world, and Angolan professional Victor Dos Santos won the gold in the men’s black belt in the weight of 85 kg, and the gold of 94 kg by the Maldivian Dar Rafijaev, and the 77 kg gold went to the Brazilian Jorge Pereira, and the gold without The same weight suit went to the Greek Konstantinos Lampos, and the 94 kg gold for men went to the Greek Dimitrios Margaritopoulos. Greece led the general classification with 102,600 points, Cyprus second with 3,000 points and Moldova third with 2,300 points.

The next day, South Korea witnessed the creation of the Abu Dhabi League International League: South Korea took the lead in the overall standings with 89,400 points, Mongolia came in second with 10,000 points and America with 8,700 points.

For his part, Tariq Al-Bahri, Director General of the Abu Dhabi Professional Jiu-Jitsu Association, confirmed that the Association provides the best competitive environment for all Jiu-Jitsu players in the world through tournaments organized in a professional manner , according to the highest quality standards, and that in light of this the tournaments are very popular among the members of this sport in every country.
Al-Bahri said: Abu Dhabi championships around the world are the best propaganda for the UAE and its successful project in the sport of jiu-jitsu, as Abu Dhabi has become known and its name circulates as the capital of jiu-jitsu in the world.
He added: Fujairah will host the Abu Dhabi Professional Jiu-Jitsu League International Championship on July 2 and 3, where registration to participate will close next Monday.