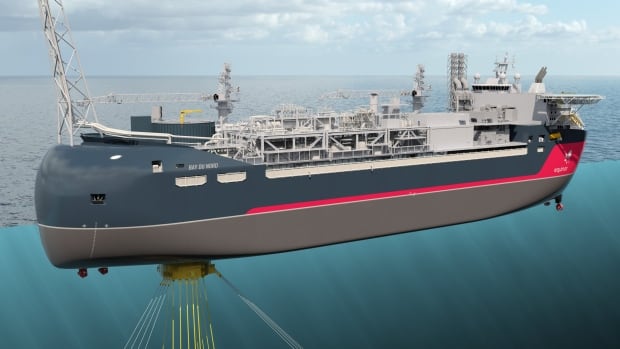 Canada could soon be the first country on Earth to pay millions of dollars in international oil royalties as a result of the Bay du Nord mega project off the coast of Newfoundland and Labrador — but how that bill will be paid remains to be seen.

Article 82 of the United Nations Convention on the Law of the Sea (UNCLOS) allows countries like Canada — known as “wide margin” states with a larger-than-normal continental shelf — to extract offshore oil beyond their limit of 200 nautical miles .

But that extraction has a catch: wide-margin states have to pay royalties on that oil, money that is then redistributed to developing countries.

Bay du Nord, captained by Norwegian oil giant Equinor, is the first project to take the province’s offshore oil industry beyond Canada’s nautical limit and into the deep waters of the Flemish Pass, which spans 270 nautical miles – approximately 500 kilometers – east of St. John’s.

Although Bay du Nord moved closer to commissioning this month — with the green light from the federal environment minister on April 6 — Ottawa and the government of Newfoundland and Labrador still disagree on how the high royalty bill resulting from the convention of the United Nations will be paid.

Hundreds of millions of dollars at stake

Michael Gardner, a Halifax-based consultant who previously studied the matter for Natural Resources Canada, said on Wednesday the project’s UNCLOS royalties could run into hundreds of millions of dollars.

“It all comes down to: what are the production levels that you are reaching and what is the price of oil?” Garner said.

So where will that money come from?

The federal government negotiated UNCLOS in the 1970s and parliament ratified the document in 2003. Ottawa says the provincial government should help pay the royalties, but the province, which expects to receive $3.5 billion from Bay du Nord, flatly rejects that suggestion — and has for years.

“The federal government is the signatory to UNCLOS and would be responsible for making payments under Article 82,” Andrew Parsons, Newfoundland and Labrador’s secretary of energy, said in a statement last week.

“The province sees no role for itself in this agreement.”

The government of Newfoundland and Labrador receives all of its offshore revenues through a deal with Ottawa known as the Atlantic Accord.

Could Equinor not pay the difference?

Ottawa could impose an additional levy on Equinor to help meet its international obligations.

But that approach comes with risks, Gardner warned.

“At some point, if the operator is squeezed enough, it’s no longer an economic proposition,” he said.

“It’s that old Norse expression, you don’t want to kill the cow you’re trying to milk.”

In a statement, Equinor spokesperson Alex Collins said, “The decision-making process regarding the implementation of UNCLOS royalties rests with the Government of Canada.”

“The implementation of this mechanism in Canada, including input from the various parties, is still under development,” said Miriam Galipeau, a spokesperson for Natural Resources Canada.

Armand de Mestrahl, a member of the Canadian team that negotiated UNCLOS in the 1970s, said he believes a compromise between provincial and federal governments is inevitable.

“Remember, without that international agreement, which the federal government has been painstakingly negotiating for years, there would be no formula. There would be no rights. We had to fight so that the international community would respect Canada’s law,” de Mestrahl said in a statement. interview in French with Radio-Canada.

“People in Newfoundland… say, ‘They stole our rights.’ It’s easy to say that, but it’s almost insignificant because the federal government and the Canadian delegation have made incredible efforts to ensure that the continental shelf is recognized.”

He added, however, that Ottawa would be negligent in overlooking the current significant state government indebtedness and string of structural deficits.

“It’s hard to see how the government will admit nothing,” de Mestrahl said.

Ottawa and the provincial government have years to come to an agreement.

Production at Bay du Nord is not expected to begin until 2028, and under UNCLOS no international royalties are due during the first five years of production, in a measure designed to help operators recoup their initial cost of capital.

Bay du Nord is expected to produce at least 300 million barrels of oil in 30 years.

In a 2020 article, Dalhousie University law professor Aldo Chircop warned that “there could be a realistic prospect of lengthy federal-provincial lawsuits” over who pays UNCLOS royalties.

But in an interview last week, he said he believes “we’re living in the era of cooperative federalism. So what that basically means is that the federal and provincial governments will work together to find a way.”

“Newfoundland would recognize that the reason this offshore development is there is because of the law of the sea convention, which creates an obligation for them. And so they should work with the federal government to fulfill this international obligation. “

In an October 2021 email about UNCLOS and obtained through access to information law, an employee of the Newfoundland and Labrador Department of Energy wrote: “Discussions are ongoing between federal and provincial governments and industry on how to meet this obligation. be met.”