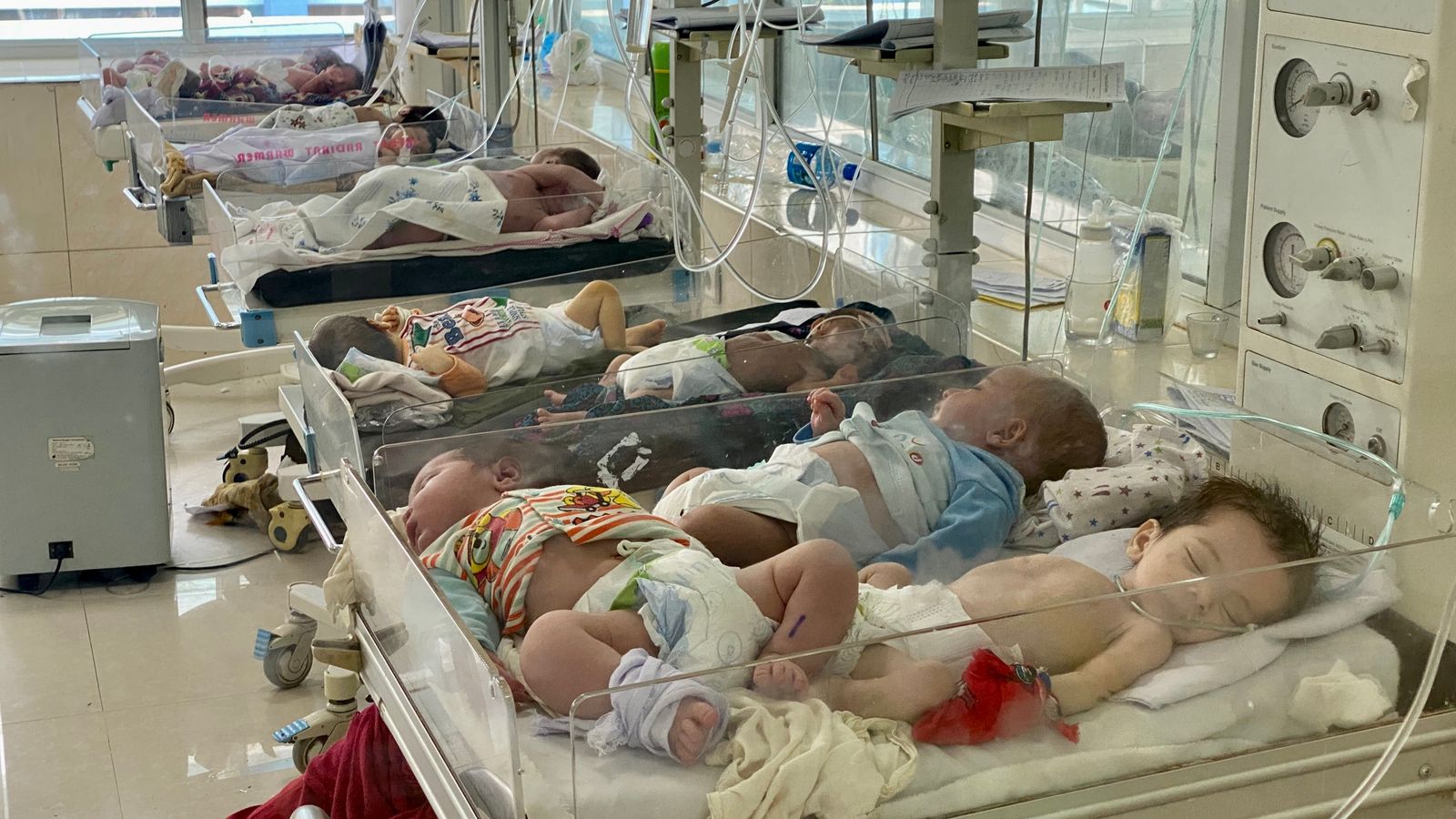 With his long black hair under a traditional cap and covering his masked face, a Taliban guard, machine gun in hand, directed me to follow the doctor.

I then realized that we would have his company for the duration of our stay.

A curious development and an unusual experience, but one that would be dwarfed by what we were about to see at the heart of AfghanistanThe largest and best children’s hospital, in the center of the capital Kabul.

“We have many departments that I have to show you,” said Muhammad Iqbal, the chief of doctors at Indira Gandhi Children’s Hospital, leading me up a series of stairs.

We entered the corridors leading to the wards, groups of women – mothers – immediately covered their faces, moved aside or looked for a place to stand out.

I could hear the crying children in the hallway, and as I peered through the ward windows, I was surprised at the sheer number being treated.

Not only was the room full, it was bursting. Cots designed for one child had two or three squeezed together.

Doctors and nurses buzzed around the room, checking vital signs and trying to calm the crying babies.

Having seen such poor medical facilities in 20 years of reporting from Afghanistan, I assumed I could not be shocked. In the provinces of the country, basic medical care has been the norm for decades.

It wasn’t the condition the children were being held in, it wasn’t really the number of children – many seriously ill – it was the fact that this is happening in the very best state hospital in the entire country.

Worse, the testimony of doctor after doctor was that they can’t keep children with treatable diseases alive because even here they don’t have enough medicines, supplies or equipment to properly care for their patients.

Afghanistan is in the midst of a medical crisis that is worsening by the day, exacerbated by an economy in free fall, the freezing of the country’s assets and the drying up of hundreds of millions of dollars in aid that has flowed here for two decades as the Taliban has taken control.

The Indira Gandhi Hospital is proof of this.

More than 500 patients are treated in this hospital, there is room for 300.

The hospital nearly closed last winter, but an injection with help from the International Committee of the Red Cross brought much-needed immediate aid and resources, but it’s not close enough.

Department after department is the same, crammed with very poor babies and children.

“Eighty percent of middle-class families used to go to private hospitals for treatment, now that they come here they can’t afford to go anywhere else,” Dr Muhammad Iqbal told me.

“There is a need for good medicines that you don’t buy from outside a hospital, this is the problem, our people are very poor.

“There is a need for ventilators, we don’t have ventilators, CPAP machines, and this is a very [big] need an IC.”

In one bed, three children, Baheer, Mehrama and Sahar. All have cerebral palsy, along with other medical complications.

Their survival rates are low, there is no treatment for cerebral palsy available in Afghanistan.

Aziz Ullah struggles to get his 16-year-old daughter Muslimah out of her wheelchair and place her next to her brother, who is only one year old.

They sought help and medical treatment in two other provinces, Zabul and Kandahar, before coming here.

Subscribe to Out Of Afghanistan on Apple Podcasts, Spotify and Spreaker

Both children have hereditary kidney disease.

“I’m worried about her,” Aziz says in a low voice.

“The doctors told me that she recently developed the disease, this is my fourth child with this condition.”

Like two of his children who have already died, Muslimah and her brother Mansoor Ahmad’s chances of survival are already slim.

“The chance of [survival] is too low, I mean 80 percent chance of dying,” explained Dr. Sharif Ahmed Azizi.

“We can’t do anything, no, because we don’t have facilities for these patients.

“For the poor patients, we don’t have good resources for the patients, because on the one hand we have more patients. I mean, the patient burden is too high, from all sides of Afghanistan the patients come here, and the facilities too low.”

I asked him what it felt like to come to work every day, knowing that there is little they can do for children like Muslimah.

“Unfortunately, there’s nothing we can do for these patients, for these kinds of patients… there’s no other way.”

Many of the children being cared for have serious illnesses that can be treated successfully.

Staring into the distance from her hospital bed, with her mother beside her, 12-year-old Amina has meningitis.

They struggle to keep her alive. It’s not a lack of skill here, it’s a lack of resources.

The hospital was spotless – and wherever we looked, it was clear that the doctors, nurses and hospital staff were very dedicated.

But without the basic resources it needs, it’s on its knees.

At some point we got separated from Dr Iqbal, I went to see if he had been called to his office. I asked one of the staff if the senior doctor was there. After a few moments he motioned for me to follow him to another office.

I apologized for intruding and said I was looking for the senior doctor and preparing to leave.

‘I’m a doctor, in fact I’m a specialist surgeon, and I’m in charge here,’ said one of the men in perfect English.

Never make assumptions in Afghanistan, I told myself.

dr. Muhammad Haseeb Wardak is the president of the hospital.

He agreed to a quick chat and I asked him if they needed international money to solve the hospital’s problems.

“We call on the international community to increase their support for us and continue this support,” he told me.

“They (the United States) should thaw our money. This is our hope, our demand.”

“This hospital has been here for 50 years and we want more facilities in the hospital, and we need more staff and equipment so we can treat patients who come here from all over Afghanistan,” he added.

The deadlock between the Taliban and the international community over human rights, especially women’s rights, remains a major sticking point. And it is at the root of many of the country’s problems.

As we walked through the corridors of the hospital, a woman grabbed us. She wanted help buying baby food for her seven-month-old daughter Fatima.

She wore the traditional blue Afghan burqa, looked straight at me and begged for help.

That’s unusual in today’s Afghanistan—for a woman in a public place to have so direct contact with a man, especially an armed Taliban guard.

It shows how desperate she is.

Malnutrition in Afghanistan has spiraled out of control. This hospital has had to expand its malnutrition unit to be able to treat more and more young patients.

The worst affected come here from all over the country – if they can make it.

Seven-year-old Safiya has just arrived with her family. They traveled from Paktia Province, about a six-hour drive from Kabul.

Safiya is seriously underweight. Her face is skeletal, she struggles to sit up on the hospital bed.

But for the first time in weeks, the family has hope. Her condition improves after just one day here.

“I’m hopeful,” her mother told me. “She’s already much better than she was before we arrived.”

But for many other parents in the malnutrition department, there is nothing but despair.

With his mother crying by his bedside, little two-year-old Shereen Khan lies motionless on his side. He has what looked like bedsores all over his back and tubes on his nose.

His mother Gulbashra, a cleaner from Helmand province, is terribly poor.

Swallowing the tears, she explains that her son, her only child, started getting sick four months ago, but she had to leave him at home to go to work.

Shereen Khan backed up and she’s constantly watching by his bedside, hoping he’ll make it.

Like so many in Afghanistan, Gulbashra doesn’t care who is to blame – she just wants her son to live.