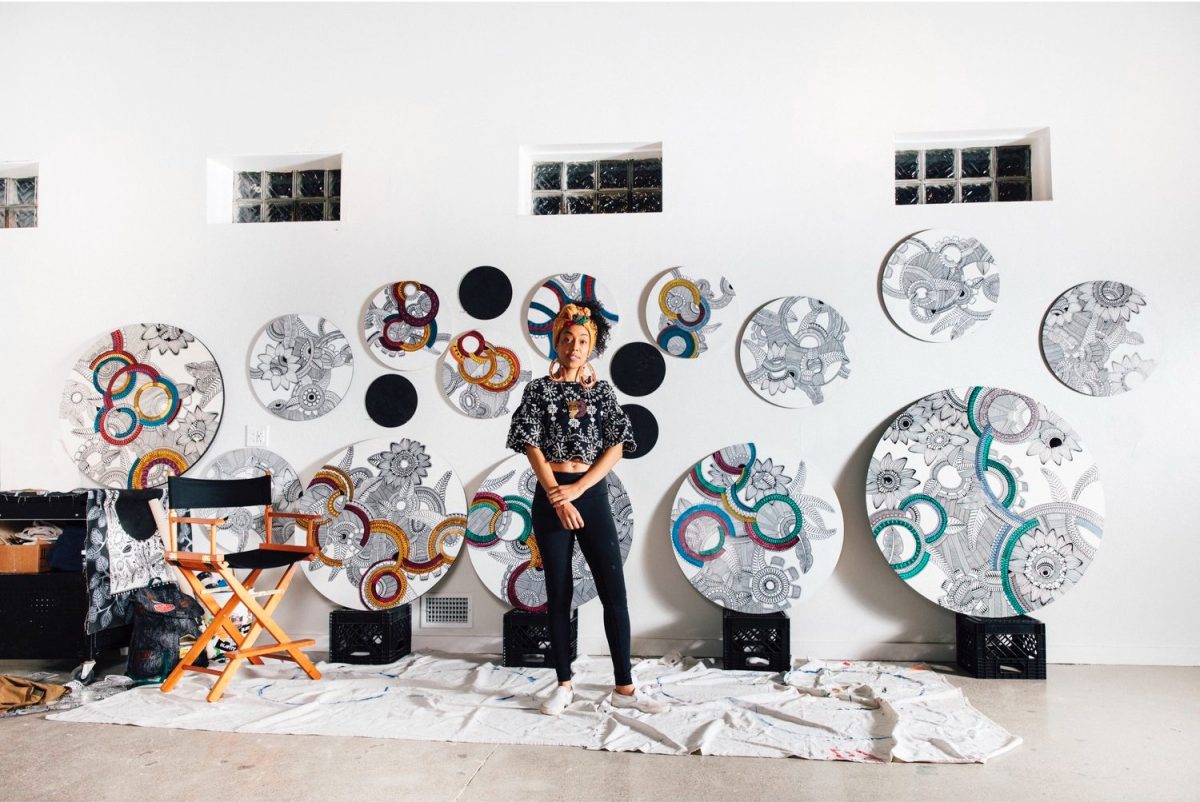 Not all stories are written with words. Some are encoded in patterns – swirling, twisting and zigzagging lines engraved in stone or woven into cloth for generations in nearly every culture. Olivia Guterson, also known as Midnight Olive, brings these ancient patterned traditions into contemporary art, drawing on her Russian, Ukrainian, Jewish and African American roots to create a dazzling new ornamental language.

An intricate surface design drapes effortlessly over Guterson’s sculptures, almost as if it had arisen organically. If you’ve never made patterns before, you may think it gets boring to mark the same shape over and over. Rather, she finds it healing and tells Hyperallergic, “This meditative practice feels so spiritual and ancestral — it’s almost like it’s the language of everyone I’m from.” She treats the pattern as another form of language, drawing symbols and memories from her multicultural family. Her Ashkenazi grandmother was a quilter and even sewed her own rugs. Guterson recalls a house filled with a glorious array of patterns, a conglomerate of porcelain tchotchkes and candlesticks. In her ink work, these memories intertwine with influences of African masks, textiles and Christmas decorations from her southern black grandmother’s equally vast art collection. There, the memories also contained appetizing smells: “There were also the herbs that we cooked with, which were dried and which we ground. All of that formed the basis for this pattern language that was vital for me to be who I am.”

“There were just so many patterns,” she continued. “Being with them all the time is just really comfortable.” Paying tribute to her grandmother’s textile work, “Grandmother’s Last Quilt” (2020) proudly showcases bold, maze-like geometries dancing together across folded fabric. Works like “From There to Here and Back” (2019) weave bright red and black lines in layers of flora across the canvas. Her compositions play delicately between rigid repetition and a free-flowing garden of quirky pen-inked vines.

In the Jewish tradition, hiddur mitzvah is the principle of making ritual objects as beautiful as possible, which has been put forward through dense ornamental decoration in many settings of Jewish history. This practice of sacred adornment can extend to everyday objects. Guterson recently teamed up with artist Laura Earle to design a wooden comb titled “Ha Aron Imotaynu (The Ark of Our Mothers).” She decorated the piece with her signature patterns around a Hamsa hand, writing in an Instagram post that “the comb is a tangible affirmation and wearable extension of the self.” From the orthodox hair cover used on one side of her family to the afro tufts and combs on the other, hair is both an ordinary part of everyday life and an extraordinary way of self-expression. Whether it’s a daily routine to apply lotion or choose how we decorate ourselves, Guterson thinks our bodies are things we “cure.”

“I think for most of us, whether we know what we’re doing or not, there’s so much reason behind the necklaces we wear or the rings we wear. That ritual is an important part of how we make way for the day,” she said.

Her ornament is also influenced by her location – the city of Detroit. “There’s a rhythm in the ground here that says so much about what I do. I think even the way my lines are divided is different here than when I’ve painted in other places.” She was drawn to the city by its deep black history, in addition to its legacy of Jewish community and solidarity. While relations between the two groups have not always been peaceful, the proximity between Jewish and black neighborhoods sparked collaborations in the civil rights struggle that continues to this day.

Guterson’s publicly engaged work ranges from gallery murals created with the community, to a Seder table woven from plastic bags she collected from her neighborhood, and public art where her floral patterns bring city walls to life.

What’s next for Guterson? She’s looking forward to checking out a large stack of books from the library once she takes her MFA undergraduate entrance exam at Cranbrook Academy of the Arts this fall. One of her interests is the memories of Judaism in Detroit. Once a dense population in the city, many have moved to the suburbs or to other cities. “There were so many synagogues. We now only have one within the city limits.” Her questions trace the stories of generations that passed, whether it was everyday life (“What hospitals did people go to? I want to know where the delis were!”) or how Jews gathered to pray in the motorcycle town.

In recent years, those gatherings have changed, both in Detroit and beyond. Some shuls have been brought into the digital sphere by the pandemic. Others have increased the security of their buildings in an era of increasing hate crime. Guterson hinted at a future project to make decorated incantation bowls to leave outside temple doors as protection, another traditional craft of Jewish magic.

When I asked about the projects she is most excited about, she immediately beamed: “Well, I gave birth during the pandemic. So I have a child who is almost two in August.” Nalo, who can be seen regularly on her Instagram page, now joins her in the day-to-day work in the studio as a close creative collaborator. She is fascinated by her child’s art, which she describes as a “carefree, non-cerebral way to just dive in.”

Through so many eras of migration and oppression, the myriad ways in which black and Jewish communities create art have evolved. Guterson’s work reaches back to collecting herbs, magic and ancestral patterns, taking them into the future together with her child.