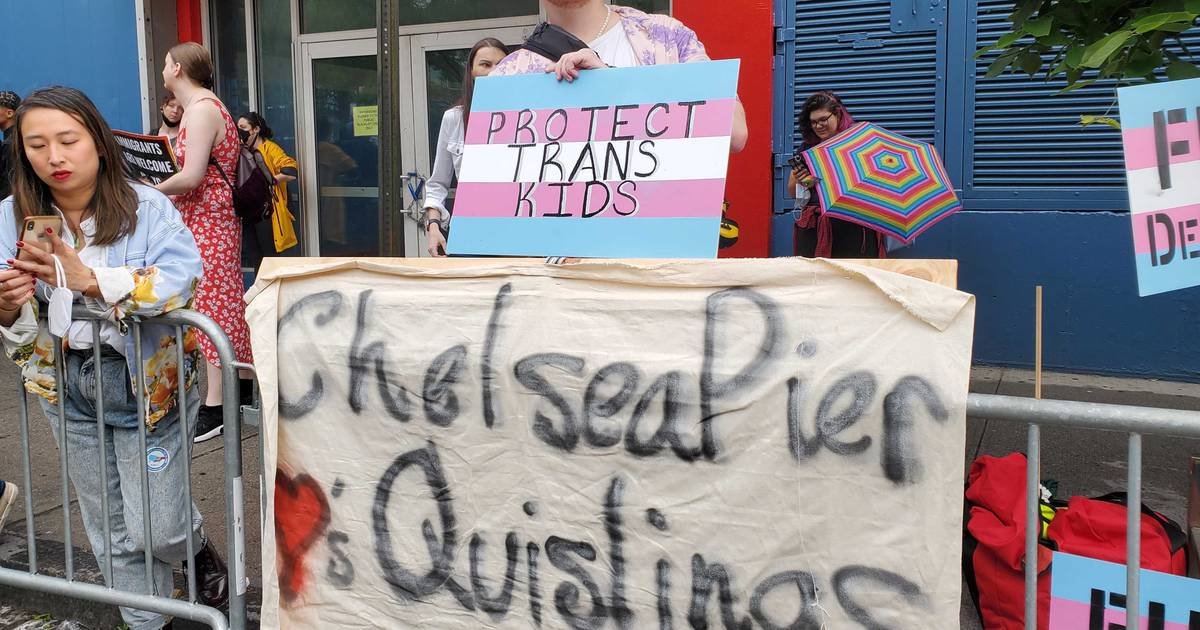 That was the message Sunday from dozens of LGBTQ rights activists and local elected officials outraged by Chelsea Piers’ decision to host a conservative conference with Florida Governor Ron DeSantis.

Amid chants of “Shame!” and called for a boycott. They expressed anger at Chelsea Piers’ refusal to cancel the event and denounced DeSantis for his support of the so-called “Don’t Say Gay” law in his home state.

“It is unacceptable that Chelsea Piers did not cancel a speech by the most anti-LGBTQ official in America,” said state Senator Brad Hoylman, a Dem representing the area. “This is a shame given the history of the Piers, its proximity to the birthplace of the LGBTQ human rights movement and the fact that we are in the middle of Pride.”

DeSantis was due to speak Sunday afternoon at the conference, organized by the conservative Jewish organization the Tikvah Foundation.

He has come under fire from LGBTQ groups and many Democrats since the signing of the law banning gender identity and sexual orientation instruction from kindergarten through third grade — “or in a way that is age-inappropriate or developmentally appropriate.” for students in accordance with state standards” – in March.

Chelsea Piers and Pier Sixty, the West Side gala space hosting the conference, have been on the defensive since news of the DeSantis event surfaced earlier this month. But they refused calls to cancel it.

“We couldn’t disagree more strongly with many of the actions of Ron DeSantis in office,” Chelsea Piers said in a statement Friday, promising that Pier Sixty would donate the payment it receives from the Tikvah Foundation to pro- LGBTQ groups.

That wasn’t enough for protesters standing behind police barricades amid drizzle at the entrance to Pier Sixty.

“It’s insulting,” Mike Dunn, a 31-year-old social worker, said of Pier Sixty’s donation plans. “I hope everyone here makes sure they regret this for years to come. We’re not leaving tomorrow.”

“Ron DeSantis is a worthless coward, [a] bootlicker that is actively hurting some of the most vulnerable people in this country,” Dunn added.

“This kind of behavior is about violence,” said councilman Yuh-Line Niou, a Democrat from Manhattan. “It’s about hurting us. It’s about making sure our communities are harmed.”

The campaign for DeSantis, a Republican, did not immediately respond to a request for comment. Neither does the Tikva Foundation.

VIP conference attendees such as DeSantis and former Secretary of State Mike Pompeo appeared to evade the protesters by being driven to Pier Sixty’s garage in black cars.

DeSantis is “the worst person for gays right now in this country and they’re hosting him here,” he added. “Get the fuck out of my town.”