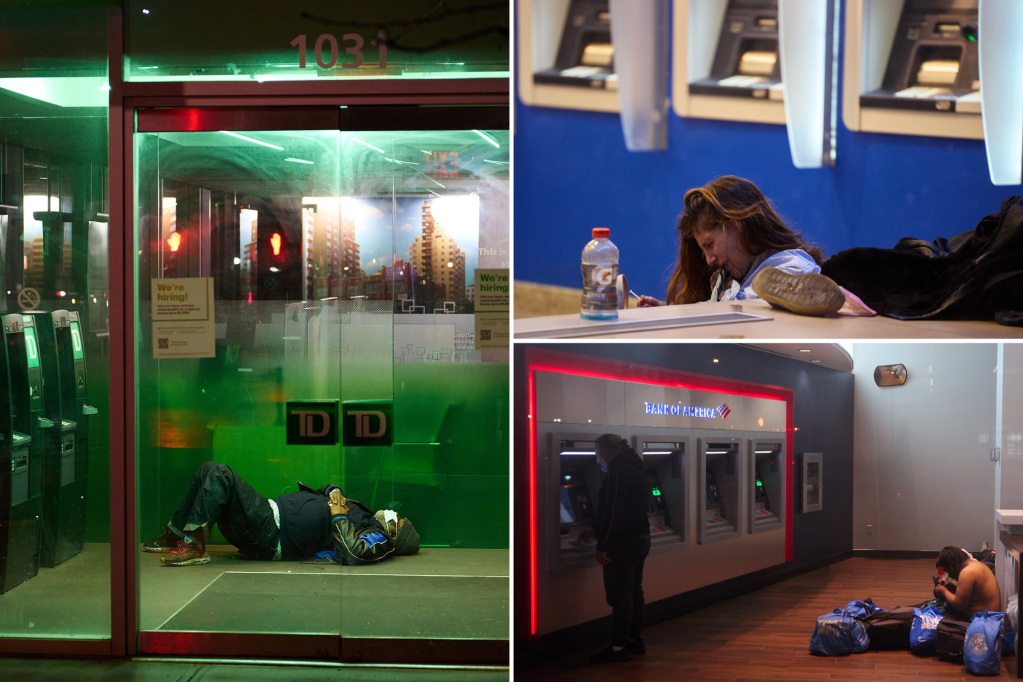 A new banking crisis has hit the Big Apple: vagrants and addicts are commandeering ATM vestibules, snoozing and shooting up in locations with 24/7 service.

“It’s almost as though they’ve assumed ownership of the ATMs,” said Eugene O’Donnell, a John Jay professor and former NYPD officer. “It’s well recognized that an ATM can be a magnet for crime and violence, and you can’t think of a worse idea than having people domicile inside of one.”

The Post conducted two late night tours of Midtown banks this week and discovered at least eight instances of vagrants cashing in on lax enforcement.

“The banks have been putting pressure on the police department for some enforcement, and my pushback to them is just lock your doors,” he said at a meeting Tuesday. “The reality of the situation is [customers] are not going into the banks with any regularity during the overnight hours.”

A confrontation between cops and a homeless man staying in a Citibank on Park Avenue on March 3 ended with the bum biting one officer and punching another in the face, cutting the officer’s cheek, police reports say.

“Ninety nine percent of the time, we’re able to move individuals [without conflict]Commanding Officer Aaron Edwards said. “We can’t just go in and lock them up. We have to give them the opportunity to leave as part of the law.

“Both cops are OK, and he was arrested.”

“I don’t like to utilize police resources when we don’t need to, when there’s a preventable solution, but the banks want to provide round-the-clock service,” he told The Post.

A Citibank spokesperson did not comment on the assault of the officers and said the bank has no plans to discontinue 24/7 ATM service.

“We take the safety and security of our clients and employees seriously. When we are alerted to an issue on our property, our security teams work quickly with law enforcement to address the issue,” a Bank of America rep said in an email.

TD Bank and City National Bank did not respond to requests for comments.

The problem is hardly isolated to Midtown.

“What disturbs us is they do their bowel movements out on the street or sometimes in the vestibule. People are afraid to enter when they see them,” he told The Post.

He said even if cops try to intervene, the problem won’t go away if the District Attorney’s Office doesn’t step up.

“The DA in Manhattan [Alvin Bragg] is a jerk. It’s the same situation in Brooklyn with DA [Eric] Gonzalez, so it’s a serious problem,” Mamet said.

One Twitter user posted Wednesday, “It’s nice how @BankofAmerica and @TDBank_US are both banks and homeless shelters. There are literally people living inside of the banks on 23rd street in NYC.”

Often, homeless people fear being robbed or attacked in the city’s shelters, but now with Mayor Eric Adams cracking down on homeless encampments and subway vagrancy, their options are shrinking.

“We’re walking past people that are living on cardboard boxes, in these makeshift, inhumane houses – this is just not right,” Adams told reporters Tuesday.

“Many more are going to [stay in vestibules] since Adams broke up the encampments,” said former Republican mayoral candidate Curtis Sliwa, who often sees vagrants in banks near his Upper West Side home. “Only five people went to a shelter. They didn’t just disappear. Bill De Blasio didn’t get it, and Adams doesn’t get it.”

“There are viable opportunities to bring our expertise into ATM vestibules as well,” she said in an email.