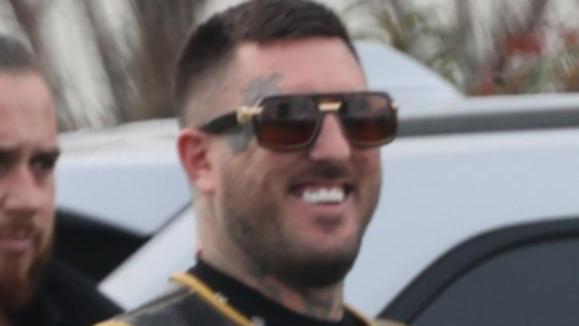 The new Comanchero boss has been hit with a serious crime prevention order that would have banned him from interacting with another cyclist in NSW.

Allan Meehan took the top spot in the group last week and is already firmly in the crosshairs of the NSW Police Force after being classified by the Criminal Groups Squad.

The news was delivered to Mr Meehan Friday morning by a police door knock at his home in Yerrinbool in the Southern Highlands.

He has not been charged with any criminal offence.

As part of the Serious Crime Prevention Order, Meehan would be banned from interacting with a cyclist or crime figure, and his life would be monitored down to what phone he uses or what clothes he can wear.

NSW Police have taken pictures of the potential action being taken, showing Mr Meehan outside his home in a dressing gown and slippers when confronted by police.

Chief Inspector Grant Taylor of the Criminal Groups Squad said the orders were intended to suppress any movements of the Comanchero or similar groups.

“He has become a primary target of the NSW Police Force and this is just one method of attacking him,” he told the Saturday Telegraph.

“We want to send a clear message. If you’re going to be the national president of the Comanchero, this is what to expect.”

The powers were created in 2016 and are designed to tackle organized crime.

Meehan, 35, joined the rebels when he was just 18 and became a chapter president in Cronulla before defecting to the Comanchero.

He gradually rose through the ranks, becoming commander of the Canberra chapter in early 2021 and later leading the Sydney collective for its final nationwide role.