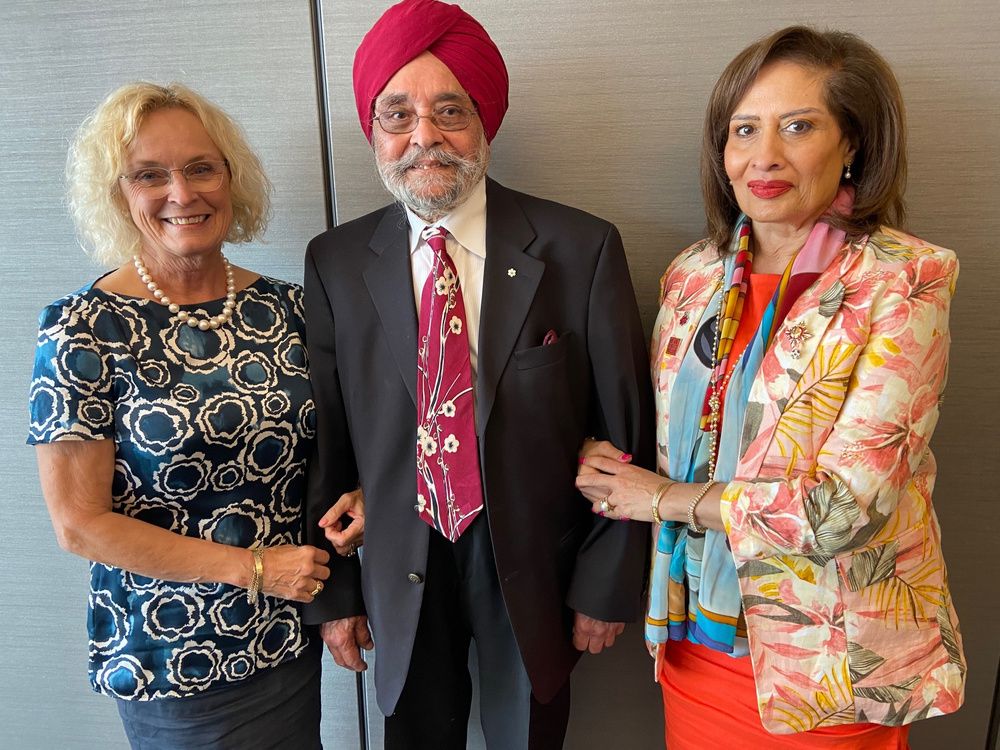 Former citizenship judge Gurcharan Bhatia told NorQuest College students that at a previous Canada Day event, he had been asked what was the best thing that had happened to him in his life.

“My response came to Canada,” he said. “It is the best country in the world to live in, as the United Nations has stated several times.”

Born in Doraha, northern Punjab, his family fled to Delhi after the loss of Bhatia’s father and 67 members of his family during the partition of India from Pakistan in 1947.

Instead of taking revenge, Bhatia developed a lifelong philosophy of peace.

He qualified as a chartered accountant in India and later a postgraduate degree in industrial management from the Royal College of Science and Technology in Glasgow. He came to Winnipeg in 1964 and moved to Edmonton in 1980.

“NorQuest is the modern face of Canada, committed to equality, diversity and inclusion,” he told a room full of students from around the world at the university’s Singhmar Center for Learning.

“It’s a unique institution, with nearly 60 percent of students born outside Canada coming from 152 countries, with 72 languages ​​spoken on campus.”

He told me, a Brit, that I was one of 40,000 immigrants who received Canadian citizenship from him while serving as a judge on the Court of Canadian Citizenship.

Bhatia, now 90 years old, spoke when he presented citizenship awards in his name. The awards honor academic achievements of newcomers who have demonstrated leadership and the attributes of courtesy, hard work and helpfulness to classmates.

Present to congratulate him were Alberta Lt.-Gov. Salma Lakhani and NorQuest president Carolyn Campbell, along with Wendy Kinsella, who helped establish the university’s advisory committee of the thousand women’s movement.

Canada is not perfect, Bhatia said, pointing to cases of gun violence and the remains of thousands of children in former Indigenous residential schools.

He praised suffragette Nellie McClung for submitting a petition to the Alberta legislature in 1915 calling for women’s right to vote.

“Her vision paved the way for the gradual lifting of obstacles not only to voting, but also to guaranteeing their human rights,” he said.

In 2012, the Canadians for a Civil Society movement in Edmonton hosted a Daughters’ Day at City Hall, laying the groundwork for eight women to serve on the current Edmonton City Council, and for four women to participate in the UCP race to become Alberta’s premier. added Bhatia.

He told the students: “We need the leaders and politicians among you who prioritize the public interest over your own, thinking globally and acting locally.

“Canada is a young nation, but a unique one. With fewer than 40 million citizens and planning to welcome more immigrants each year, Canada is a refuge and home to millions of refugees and victims of violence, poverty, discrimination against refugees, colors and nationalities.”

But he warned: “Autocrats, politicians hungry for power and wealth, are challenging democracy, equality, inclusion and human rights.”

Lectures for promoting and developing Canada as a civil society with five pillars of human rights were initiated in 2017 at NorQuest College. At the time, keynote speaker, Supreme Court Chief Justice Beverly MacLachlan asked, “Do we have a better choice?”

The five pillars are justice and respect for all, literacy for all and zero tolerance for bullying and violence, justice and nonviolence, respect for the UN Declaration of Human Rights and the Canadian Charter of Rights and Freedoms, and a vibrant society with equal opportunities with sustainable growth and development.

“The solution to keep Canada the best country in the world is you!” said Bhatia, pointing to the young crowd.

“May the spirits of Mahatma Gandhi, Nelson Mandela and Dr. Martin Luther King guide you.”

Former Edmonton Police Staff Sgt. Gary Goulet was named a Member of the Order of Canada last week for founding a Cops for Cancer charity program that has now raised an estimated $100 million.

“In 1994, my sister introduced me to five-year-old Lyle Jorgensen, a neighbor who was undergoing chemotherapy and had lost his hair and other children made fun of him,” says Goulet.

“My head was already shaved for comfort, so I wanted to let him know it was cool to be bald.”

Goulet took Jorgensen on a tour of the police station, and while preparing a photo, other officers who wanted to insist were told it was only for bald guys.

Officers quickly shaved their heads in the parking lot, the Journal posted a photo and Goulet received messages of support from all over Canada.

His enthusiasm led thousands of first responders across the country to participate in activities to fund childhood cancer research and support children and their families.

The Order of Canada is awarded to people who make outstanding contributions to the nation.

Goulet served with the EPS for 28 years. Now retired, he plays drums in a classic rock band with two other retired police officers.