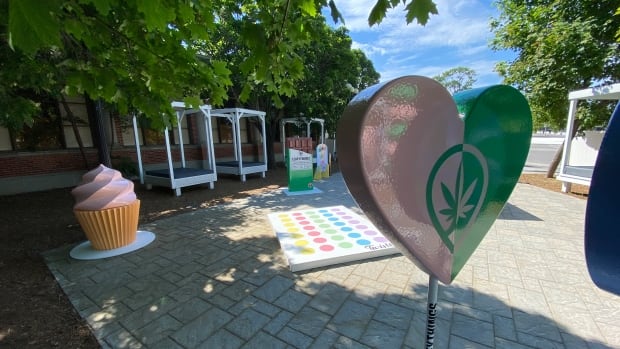 At Grand Bizarre, customers can swim, eat, drink, mingle and now, if they feel like it, walk around the corner and smoke cannabis in a restricted area.

Cannabis Carnival is being touted as one of the first of its kind in Ontario – a special cannabis smoking spot that the president, Zlatko Starkovski, says complies with the Smoke Free Ontario Act.

“I think that cannabis smokers generally need a safe, responsible place to smoke when they go out,” Starkovski told CBC News.

“There are a lot of people who smoke at home, in cars and possibly over-consumption, so we’re taking a proactive approach to cannabis smokers now that it’s been legal since 2018.”

Starkovsky notes that there are plenty of places to buy cannabis, but not many designated places to consume it. He says Mothers Against Drunk Driving and the Ontario Cannabis Store are educational partners.

“We checked all the boxes to make sure we also avoid secondhand smoke,” he said.

A new space where people can smoke cannabis is being touted as one of the first of its kind in the province. Cannabis Carnival is held in Grand Bizarre, located on the grounds of Exhibition Place. Business experts in the industry say more such venues may appear in the future.

“No alcohol is served in the cannabis area…and we don’t sell cannabis, you bring your own.” Starkovski said, adding that being at Exhibition Place and working with such a large area helped them meet the guidelines.

“We have the space to do something like that.”

There could be more designated cannabis areas

Brad Poulos, a lecturer at the Ted Rogers School of Management at Toronto Metropolitan University, says the space is a creative idea and he expects more from it.

“We’re definitely going to see more of these things pop up as people discover what you can and can’t do,
regarding the rules surrounding the use of cannabis, especially smoking,” he said.

“Because there are a lot of places where you can’t smoke cannabis… I definitely think we’ll have a cannabis lounge industry at some point,” Poulos said, adding that it already happened before legalization.

The province says it has started a number of consultations about consumption lounges.

George Smitherman, president and CEO of the Cannabis Council of Canada, says such spaces are a step toward normalizing cannabis use.

“It’s especially beneficial for the cannabis consumer, who, although we’ve had legalization, was sort of forced to consume behind the dumpster,” he said.

And while Smitherman says it’s not easy to set up a location like this within county regulations, he believes there’s interest in it and the industry will have an opportunity to boost tourism.

“I think we’re going to see a lot of evolution in this space over time,” he said.

“Keep in mind that we are mainly talking about outdoor consumption as we are talking about dried flower cannabis, but there is an exciting range of other products suitable for indoor use such as edibles, drinks and even infused foods.”

For now, Grand Bizarre’s outdoor space will remain open for the summer, with the potential to become permanent in the future.