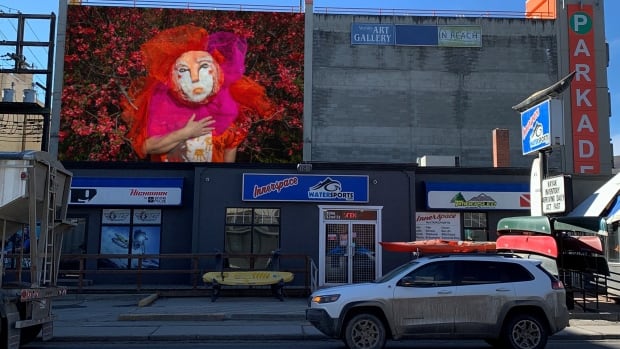 Residents in Vernon, BC, are embroiled in an intense debate over a controversial council-approved mural project, hailed by some as public art with a local perspective, but criticized by others as “scary” and “unappealing.”

The Council also approved that the art gallery install the remaining murals at its own expense, with the consent of the property owners. All murals would be on display for five years.

The public art project titled Behind the Mask, featuring a person wearing a papier-mâché mask on each mural, is the creation of Calgary artist Katie Green. On her website, she says she has painted murals internationally, including in the US, India, Taiwan and Germany.

Following a similar project in Calgary’s East Village in 2019, Green collaborated with the Vernon Public Art Gallery and mental health professionals from the nonprofit Turning Points Collaborative Society in a series of workshops in April, helping 11 participants design masks. that reflect how the COVID-19 -19 pandemic has affected their lives.

With the support of the city last March, the art gallery secured more than $55,000 in grants from the Canada Council for the Arts to host the workshops, hold a photo exhibition featuring workshop participants wearing their masks, and displaying photos as murals across the borough. expand.

Debate on Behind the Mask project

Vernon master muralist Michelle Loughery is one of nearly 3,500 people who have a online petition against the Behind the Mask murals, who say the murals are “unappealing,” “scary for young children,” and were not designed by local artists.

Loughery, who designed Vernon’s 28 historic murals in the early 2000s, praises Green’s murals, saying they work well in the myriad vantage points of Calgary’s vast urban landscape, but don’t work in a small community like Vernon.

She also says the city has not held a public consultation on Green’s murals, unlike what she did with her own mural project involving the community.

“Our kids are fed up with masks — my grandkids are terrified of them,” she told CBC’s host Chris Walker. Dawn South† “It just doesn’t represent where we need to go in the future.”

Kimberly Fuller, resident of Vernon, who has a online counterpetitionsays she supports Green’s murals because they are community-based and have powerful messages about mental health issues.

Fuller also says she’s ashamed of her neighbors’ refusal to accept artists from outside of Vernon.

“We should support artists, whether they live in this city or elsewhere. I want international artists to create murals here,” she said. “I don’t just want to keep some old-fashioned murals that we never touch or change.”

Green says she understands that her murals can cause discomfort, but public art is about inviting conversations about emotional experiences.

“What’s underneath that discomfort? Why am I feeling the emotional response I’m having? What’s aroused in me that I may or may not want to explore?” she said. “These questions can lead to such a deeper understanding of not just ourselves, but each other.”