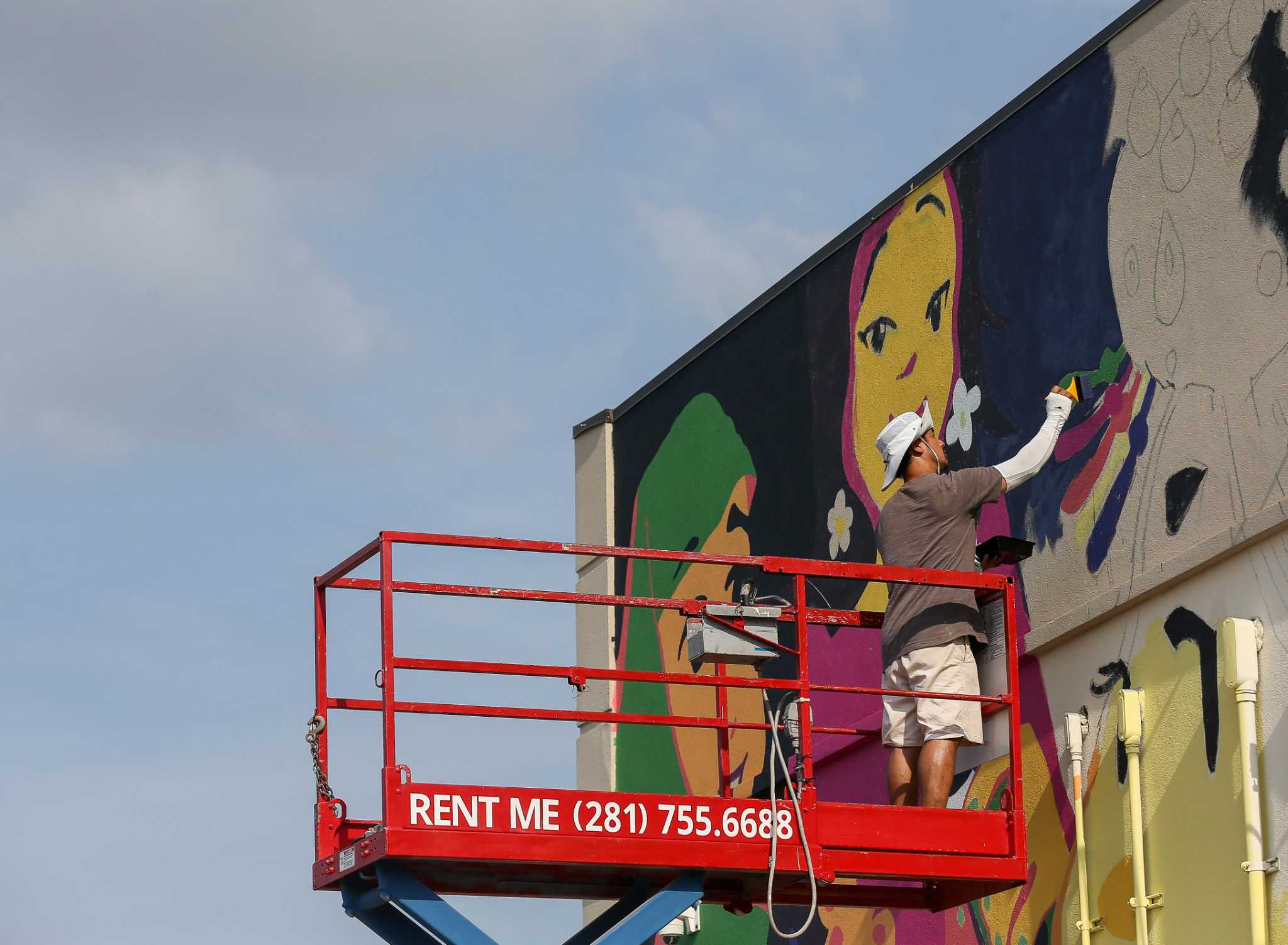 When Thomas Tran was planning his design for the Asiatown Community Mural, he wanted to make sure everyone in the neighborhood could see their culture on the giant wall across from the H-Mart on Bellaire. Growing up in Alief – one of the most diverse neighborhoods in the most diverse city in the United States – he had no shortage of references to draw from.

There is a woman in a hijab drinking boba tea next to a woman in a traditional Filipino dress, and a child shoving an egg roll into the mouth of the mythological Japanese tengu. Further along the wall, Sun Wukong, the Chinese trickster god, cackles over a platter of roast pig, while Garuda, a Hindu demigod, looks on stoically.

The Asiatown Community Mural completed on Sunday was painted over five days last week with the help of other artists, students and community members as part of a team of more than 200 volunteers working mainly through Instagram or word of mouth. heard about the project.

For Tran, involving the community in his process is what makes murals worthwhile. As a student at the Columbus College of Art and Design in Ohio, he was asked to create a mural for a fashion week exhibition in college and learned that large-scale projects are just more fun with friends.

“I wanted to share that experience with people,” Tran said. “Art is a lonely performance, and this is the only time you can have a party and do art.”

Every day at 4:00 PM, Tran would pull into a minivan full of paint supplies and set up two tents on a grassy median in the Sterling Plaza parking lot until midnight. The volunteers would trickle in shortly after, and he would lead them to a paint-by-number-style banner telling them which colors to place in which places.

Once the volunteers decided which part of the mural they wanted to paint, Tran sent them off with a paintbrush and a red Solo cup of the desired paint color, encouraging them to stay hydrated and take a break when the scorching heat in Houston. also would increase intensely.

Older, more experienced painters climbed on scaffolding to paint the upper part of the two-story mural, while young children, such as 7-year-old Phoenix Le, painted parts at the bottom. Each volunteer who contributed their time signed their name at the bottom of the wall in the center of the mural.

“He may not understand it now, but he can come back later and say he contributed to this and it’s part of the whole city,” said Phoenix’s mother Vy Le.

On HoustonChronicle.com: How an artist uses shipping containers to break through barriers in Alief

The mural was commissioned by the Vietnamese Culture and Science Association (VCSA), which received a grant from Houston in Action for the artwork, and painted on the back of a building in the Sterling Plaza shopping center that houses a tea cafe, a ice cream parlor and donut shop. They felt that Tran, who had painted the Alief Community Mural in 2019, was the right person to lead the project.

“Thomas is very young, but he likes learning about different cultures and bringing Asian cultures into the mainstream, reflecting between family and animals and food and activities, and in a way it’s a very futuristic, abstract form of animation . He’s very creative and we love that,” said VCSA board member Thanh Le.

The official unveiling of the mural is on June 4, with several speakers and a lion dance troupe.

“Especially for the young people of Houston, this is great because they see art all over the city,” said the board member. “So okay, come to this side of town now, because we have something to show you too.”