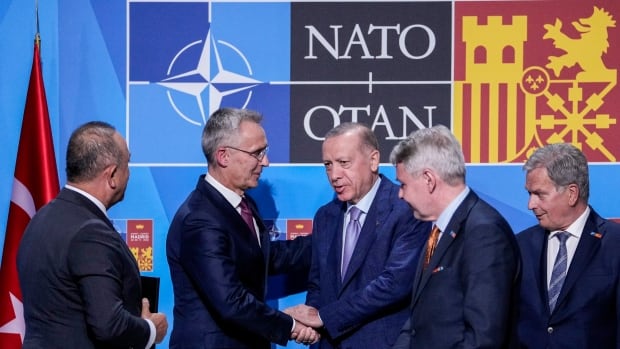 Turkey on Tuesday agreed to lift its opposition to Sweden and Finland’s accession to NATO, breaking into a deadlock that clouded a leadership summit in Madrid amid Europe’s worst security crisis in decades caused by the war in Ukraine.

After urgent top-level talks, the secretary-general of the alliance, Jens Stoltenberg, said that “we now have an agreement that paves the way for Finland and Sweden to join NATO.”

The Russian invasion of Ukraine has prompted Sweden and Finland to give up their long-standing non-aligned status and apply to join NATO. But Turkish President Recep Tayyip Erdogan had blocked the move, insisting that the Nordic couple change their stance on Kurdish rebel groups that Turkey considers terrorists.

Turkey said it “got what it wanted”, including “full cooperation … in the fight against” the rebel groups.

Summit meeting will determine the future course of the alliance

The agreement marks the opening of a pivotal summit dominated by Russia’s invasion of Ukraine. US President Joe Biden and other NATO leaders arrived in Madrid for a summit that will set the alliance’s course for years to come.

Stoltenberg said the meeting would provide a blueprint for the alliance “in a more dangerous and unpredictable world.”

“To defend in a more dangerous world, we need to invest more in our defense,” Stoltenberg said. Only nine of NATO’s 30 members meet the organization’s target of spending two percent of gross domestic product on defense.

Spain, which hosts the summit, spends only half of it.

Trudeau on Canada’s role in an expanding NATO

Prime Minister Justin Trudeau answers a question about Canada’s NATO commitments as the organization announces a massive jump in the number of soldiers in its highly trained force.

At the top of the agenda for leaders in Wednesday and Thursday meetings is strengthening defenses against Russia and supporting Ukraine.

Biden, who arrived with the aim of bolstering the resolve of all hesitant allies, said NATO was “as united and galvanized as I think we’ve ever been”.

The invasion of Moscow on February 24 shattered European security, bringing shelling of cities and bloody ground fighting back to the continent. NATO, which has begun to turn its attention to terrorism and other non-state threats, has once again faced a hostile Russia.

“Ukraine is now facing an atrocity that we have not seen in Europe since World War II,” Stoltenberg said.

Diplomats and leaders from Turkey, Sweden and Finland have previously held a wave of talks in an attempt to break the deadlock over Turkey’s resistance to expansion. The leaders of the three countries met next to Stoltenberg for more than two hours on Tuesday before the agreement was announced.

Erdogan is critical of what he sees as Sweden and Finland’s lax approach to groups that Ankara sees as threats to national security, including the Kurdistan Workers’ Party, or PKK, and its Syrian expansion. The US support for Syrian Kurdish fighters in the fight against the Islamic State group has also infuriated Turkey for years.

LISTENING | Why Turkey objects to Sweden and Finland joining NATO:

The current15:34Why Turkey objects to Sweden and Finland joining NATO?

Turkey objects to Sweden and Finland’s bid to join NATO. We talk to Steven Erlanger, Europe’s foremost diplomatic correspondent for the New York Times; and Aslı Aydıntaşbaş, a senior fellow at the European Council on Foreign Relations.

Ending the deadlock will allow NATO leaders to focus on their main problem: an increasingly unpredictable and aggressive Russia.

Kiev mayor urges alliance to ‘do everything’ to stop war

A Russian rocket attack Monday on a shopping center in the central Ukrainian city of Kremenchuk was a stark reminder of the horrors of the war. Some saw the timing when the leaders of the Group of Seven met in Germany just before NATO as a message from Moscow.

Ukrainian President Volodymyr Zelensky, who will address NATO leaders by video on Wednesday, called the attack on the mall an “terrorist” act.

Kiev mayor Vitali Klitschko traveled to Madrid to urge the alliance to provide his country with “everything needed” to end the war.

“Wake up, guys. This is happening now. You’re next, this is going to be knocking on your door in an instant,” Klitschko told reporters at the summit location.

Stoltenberg said Monday that NATO allies will agree at the summit to increase the strength of the alliance’s rapid reaction force nearly eightfold, from 40,000 to 300,000 troops. The troops will be stationed in their home countries, but dedicated to specific countries on NATO’s eastern flank, where the Alliance plans to stockpile equipment and ammunition.

Leaders announced new aid to Ukraine and tougher sanctions on Russia at the G7 summit in Germany. NATO also announced that it is stepping up its rapid reaction force in Europe as a sign of mounting tensions.

Beneath the surface, there are tensions within NATO over how the war will end and what concessions Ukraine should make to end the fighting.

There are also differences as to how tough a stance should be taken against China in NATO’s new Strategic Concept – the set of priorities and goals set out once a decade. In the latest document, published in 2010, China was not mentioned at all.

The new draft is expected to outline NATO’s approach to issues from cybersecurity to climate change – and China’s growing economic and military reach, and the growing importance and power of the Indo-Pacific region. For the first time, the leaders of Japan, Australia, South Korea and New Zealand will be guests at the summit.

Some European members are wary of the US hardline on Beijing and do not want China to be portrayed as an adversary.

In the Strategic Concept, NATO will declare Russia its greatest threat.

The Russian state space agency Roscosmos marked the opening of the summit by releasing satellite images and coordinates of the Madrid conference hall where it is held, along with those of the White House, the Pentagon and government headquarters in London, Paris and Berlin.

The agency said NATO planned to declare Russia an enemy at the summit, adding that it would publish precise coordinates “just in case”.