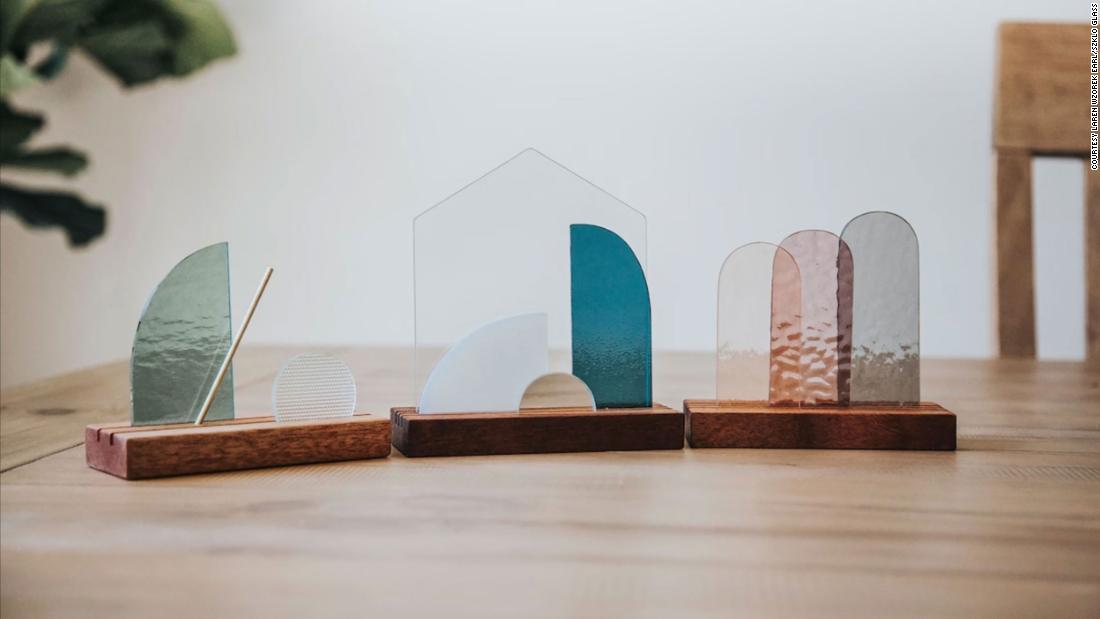 In the fall of 2020, just before the typical holiday rush, glass artist Lauren Wzorek Earl noticed an unusual surge in sales of one of her most popular products. A meme had taken off on Twitter that mainly commented on minimalist nativity scenes. There was her stained glass version, alongside other elongated wise men and faceless diamond-shaped baby Jesuses.

“I am crying‘ the tweet read. Probably crying with laughter.

To be honest, it’s kinda funny. After millennia of endless, extravagant depictions of Christianity’s first family, these slick blocks and blobs are sure to be a distraction. While they might elicit a chuckle (imagine finding a delinquent wooden block simply inscribed with “Jesus” between couch cushions), these increasingly popular decorations have many fans — and can spark fascinating conversations about a cherished Christmas tradition.

The first known re-creation of the Nativity, or event of the birth of Jesus, is credited to St. Francis of Assisi in 1223. Living up to his name as the patron saint of animals, Francis reportedly did it grandly: with the permission of the pope at the time, he collected some animals in a cave, invited villagers to have a look and preached the story of the birth of Jesus.
Over the centuries, nativity scenes or nurseries became an art that could be easily adapted to different cultures and styles, both simple and otherwise. The tableaux depict Mary, Joseph and baby Jesus, as well as an assortment of the three wise men, shepherds and various adoring animals. The selection is not biblically accurate, as the three kings came to the scene canonically much later. But, like photoshopping an absent aunt into a family portrait, a minor revision creates a more symbolic whole.

View of a wooden nativity scene at the Christmas market on the Main Market Square in Krakow, Poland. Credit: Artur Widak/NurPhoto/Getty Images

Now, during the Christmas season, one can hardly drive to the grocery store without seeing some kind of nativity set up in glowing plastic in a front yard or performed by bewildered children outside a church. There are nativity scenes made with real gold, frankincense, and myrrh, Disney nativity scenes, and nativity scenes so fine they serve as art museum showpieces.

But what about something… simpler?

Earl, the glassblower, has worked with stained glass and mirrors her entire career. After taking a break to build her family, she needed new inspiration. It came in 2017 when her sister-in-law sent her a stained glass nativity scene from Europe.

“It involved traditional techniques, with soldering and foiling. And I thought, ‘I have to adapt this to my style,'” she told CNN.

She filled pages and pages with sketches, adjusting shapes here and thinking about color and texture there.

“I didn’t want the piece to consist of real human figures,” she said. “So as it evolved, it became a series of shapes that resembled the scene. I love that you can know what it represents without those details. You can let it recognize your mind instead.”

The piece, made of textured glass and mirrors, was a hit. Three years ago, West Elm home improvement store picked up the set as part of its local artist program. It is currently a featured product on Etsy. And yes, every year people send Earl the same meme from 2020.

“I think it’s funny. I know it’s not for everyone, but it’s a new option for people,” she says. “I’ve had clients who collect nativity scenes, or who say they’ve been waiting for one that really appealed to them. That’s what’s important to me.”

If stained glass and soft lines are still too much for some tastes, there’s also a set of labeled wooden blocks created by Berlin artist Oliver Fabel that requires some homework to appreciate. The set, available in German or English, is inspired by the Bauhaus style of art and architecture. Bauhaus design praises function over form, using simple forms and embracing the possibility of mass reproduction. It’s a beloved form of design among avant-garde enthusiasts, and explains why so many collectors love Fabel’s nativity scene, which to others may look like a set of Lincoln Logs.
In the general market of nativity scenes, simplicity of this size is not the norm. And yet, from a religious perspective, the place of Jesus’ birth is one of ultimate humility. In fact, for Christians of all stripes, the symbol of the Nativity is both about humility and one of the most important events in their religion.

Brooklyn Swenson, an artist in Utah, says she drew on this inspiration for her brightly colored minimalist nativity scene.

“Just like the story of the birth of Christ – this nativity scene is very simple,” she writes on Etsy. “He was born in a humble town, to humble parents, in a humble manger.”

Meaning, aesthetic – or both?

Whole Christmas dinners could be filled with conversations about abstraction and symbolism, about how minimalism tries to reduce a concept to its most recognizable form, and of course how that can be applied to one of the most recognizable scenes in the world. When the dishes are done the discourse may turn to ornamentation, and the more regular nativity scenes, with their gilded edges and fine robes (and indulgently human faces) can pay homage to the symbolic glory of the Christmas story rather than its more humble aspects . By the time it becomes clear whether minimalist design itself is a form of extravagance, the evening’s host will be pushing people out the door.

It’s no wonder those who make and buy these minimalist sets say they’re such a talking point.

They’re also a growing trend at craft venues and craft fairs, and artists like Earl and Fabel say they’ve had to fight counterfeit designs and even take legal action to protect their work in the few years since they became one. popular. The trend has also inspired decors that straddle minimalism and outright absurdity.

While people buy her art for a variety of reasons, Earl finds that a large portion of her sales are to younger clients. She states that some would like to start their own version of Christmas traditions, even if it doesn’t look much like a typical nativity scene.

“I think people like the idea of ​​connecting with art, rather than just a set of figurines, which some nativity scenes are,” she says.

Her favorite part of her stained glass nativity scene is the figure of Jesus, a shy, downturned semicircle of mirrored glass.

“I didn’t want to put any color on that,” she said. “After all, we don’t know what these people looked like. We all have our own idea. And I love that people who look at the Jesus in this scene see themselves reflected.”