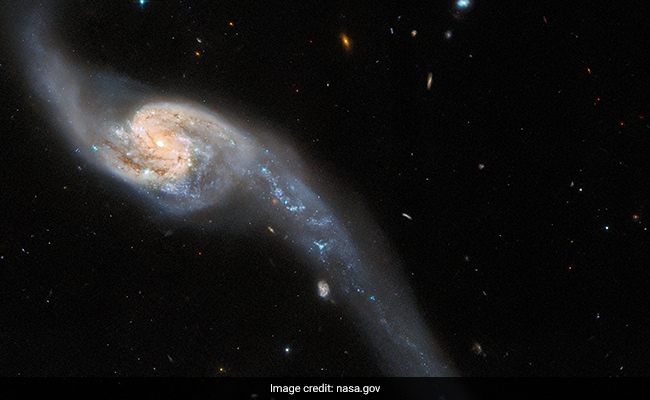 The Hubble Space Telescope recently revealed a spectacular image of two of the galactic triplet’s galaxies. According to the American space agency NASA, the triplet Arp 248 is also known as Wild’s Triplet and is located about 200 million light-years from Earth in the constellation Virgo.

In this viral image, an arrangement of interacting galaxies looks both visually and scientifically appealing and appears to be connected by a bridge. The agency’s official website wrote: “The two large spiral galaxies visible in this image — flanking a smaller, unrelated spiral galaxy in the background — appear connected by a luminous bridge.”

The two large spiral galaxies in this image are part of the galactic triplet known as Arp 248, located about 200 million light-years away in the constellation Virgo.

In a press release, the space agency also added that this discovery is the result of a project that is delving into two galleries of strange and beautiful galaxies: A Catalog of Southern Peculiar Galaxies and Associations.

A few days ago, the telescope had captured a stunning image of a “spiral galaxy” and it went viral on the Internet. It captured nearby stars in the Milky Way that shine as brightly as its galactic companion.

The European Space Agency had originally released the image of the NGC 5495 galaxy on September 26. However, it recently went viral as its Milky Way stars effectively photobombed the spiral galaxy. Galaxy NGC 5495 is located 300 million light-years from Earth.

Launched more than 30 years ago, the Hubble telescope is a joint project of the US space agency NASA and the European Space Agency (ESA).