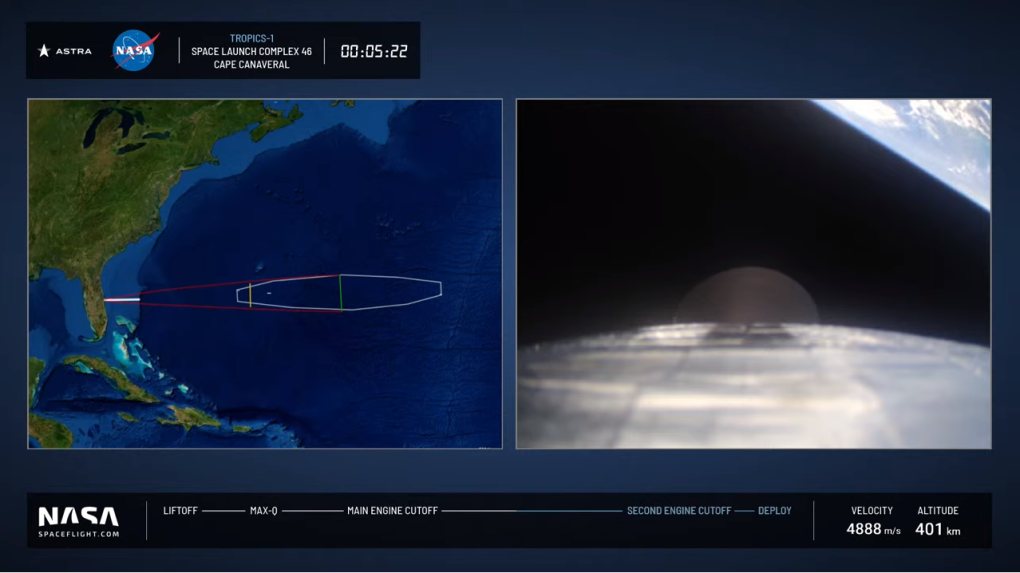 The outage occurred about 10 minutes after a successful launch of Astra’s Rocket 3.3 at 1:43 PM ET (1743 GMT) from a launch pad at the Cape Canaveral Space Force Station in Florida.

“We had nominal flight in the first stage. However, the top stage motor shut down early and we didn’t launch our payloads into orbit,” said Amanda Durk Frye, Astra’s livestream commentator.

The rocket carried two small satellites designed by the Massachusetts Institute of Technology’s Lincoln Laboratory to measure moisture and precipitation in tropical storm systems. They would be the first batch of a six-satellite constellation operated by NASA, with the rest that Astra also plans to launch in the future.

We had a nominal first leg flight. The top stage shut down prematurely and we failed to put the payloads into orbit. We have shared our regrets with @NASA and the payload team. More information will be provided after we complete a full data review.

Sunday’s failed mission was Astra’s second this year as the newcomer tries to get its launch operations off the ground with Rocket 3.3, a replaceable two-stage vehicle capable of launching 330 pounds (150 kg) of satellites into low Earth orbit. to lift.

Of the Astra’s seven attempts at orbit, including test missions without revenue-generating payloads, two have been successful — the first in November last year and the second in March.

NASA is partnering with emerging rocket companies to launch low-cost science payloads as a way to fuel growth in the rocket industry.

Although today’s launch with @Astra didn’t go as planned, the mission presented a great opportunity for new science and launch possibilities. https://t.co/9s30sDWJzz

“While today’s launch with @Astra didn’t go as planned, the mission presented a great opportunity for new science and launch capabilities,” Thomas Zurbuchen, the head of NASA’s science unit overseeing the mission, wrote on Twitter.

“While we’re disappointed at this point, we know there’s value in taking risks in our overall NASA Science portfolio, because it takes innovation to lead the way.”