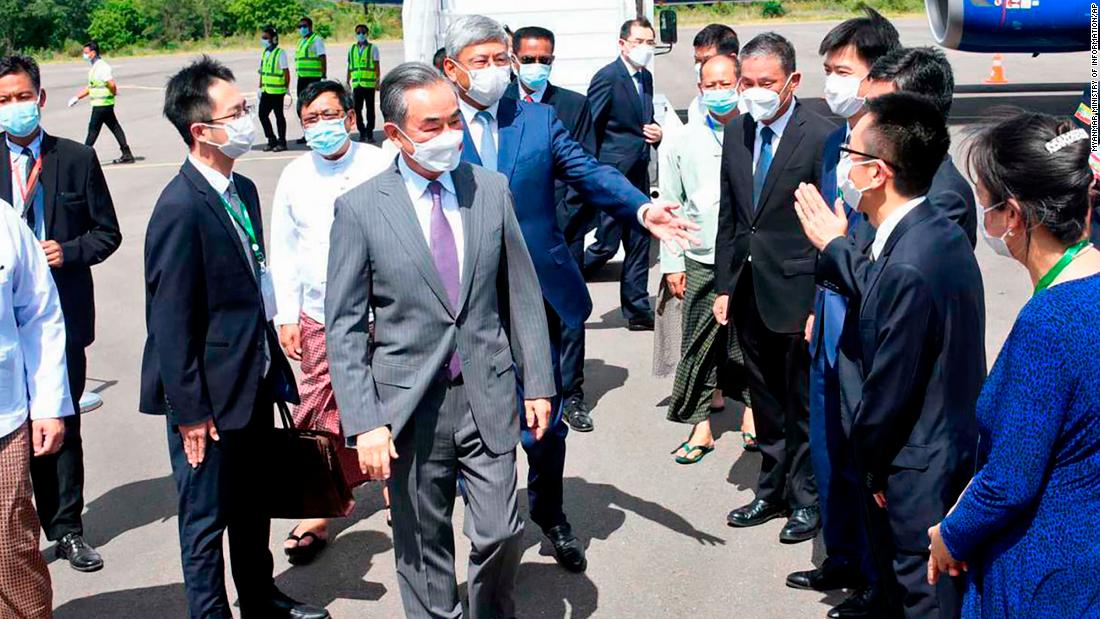 Wang is in Myanmar for his first visit since the junta overthrew the democratically elected government of Aung San Su Kyi in February 2021. His trip is the most eye-catching by a Chinese representative since leader Xi Jinping met junta chief Min Aung Hlaing in 2020 to discuss China-backed projects, including a controversial dam and economic corridor.

“We encourage all parties in Myanmar to engage in political dialogue within the constitutional and legal framework and restart the process of democratic transformation,” Wang said in comments published by his ministry. He also pledged support and reiterated hopes for Myanmar’s “political and social stability”.

“China is paying close attention to the situation in Myanmar and stands ready to continue to play a constructive role in its own way,” he said. “We will jointly support Myanmar’s efforts to restore its economy, improve people’s livelihoods and safeguard people’s rights and interests at the grassroots level.”

Wang arrived at the Nyaung Oo airport in Bagan city on Sunday and was welcomed by senior military leaders and other state officials.

He will lead a Chinese delegation to attend a meeting of top foreign ministers with his colleagues from across the region, including Cambodia, Vietnam, Thailand and Laos, although it is not yet clear whether he will meet Min Aung Hlaing.

China remains one of Myanmar’s few international allies. It has refused to condemn the 2021 coup in which the junta ousted Suu Kyi, who is now held in solitary confinement in prison, sparking concerns among global watchdogs and human rights groups.

Earlier in April, Beijing pledged its support to the junta’s leaders, saying its support would continue “no matter how the situation changes.”

China is also one of Myanmar’s largest trading partners, investing billions of dollars in mining, oil and natural gas developments in the resource-rich country, and along with Moscow, Beijing is supplying weapons to the junta army, the United Nations said.

Wang’s visit comes as the country plunges into further turmoil. Not only is deposed leader Suu Kyi in prison, but the planned state executions of two men, veteran democracy activist Ko Jimmy and former National League of Democracy legislator Phyo Zayar Thaw, have sparked outrage from the United Nations, calling it a “blatant violation of the right to life, liberty and security.”

Ian Chong, a political science professor and regional security expert at the National University of Singapore, said it is in Beijing’s interest for Myanmar to be politically stable.

“It seems to me that Beijing is trying to establish some sort of settlement in Myanmar, or at least give the impression that it is doing so, and its approach seems to be to give the junta some of the legitimacy it craves.” .” said Chung.

“Whether this will change the junta’s behavior in relation to the civil war that started their coup is questionable, but it could give Beijing more leverage over the military.”