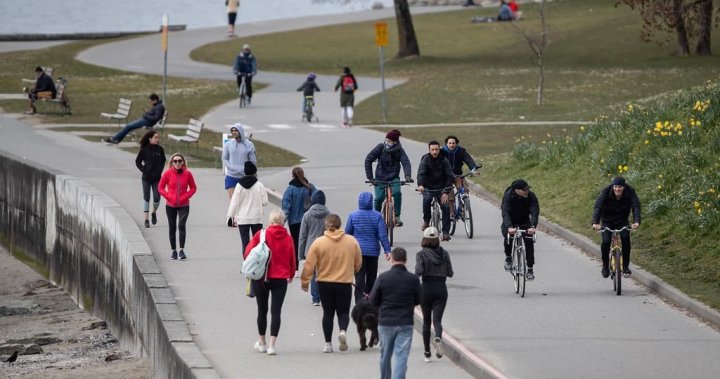 You wouldn’t think of seeing scenes of truck drivers honking their horns or signs with anti-vaccination protesters, but new research data suggests Canadians have increased confidence in their institutions and their neighbors since the COVID-19 pandemic.

Still, Canada is a long way from a national “Kum Ba Yah” sing-along. Cary Wu, lead author of the newly published paper, said confidence is highly correlated with how much money you make.

“Income is a good predictor,” said Wu, a sociologist at York University who just published his study in the journal Social Science Research.

Nearly one in four Canadians has contracted COVID-19, poll suggests

While previous research has taken snapshots of Canada’s attitudes during the pandemic, Wu and his two co-authors wanted to look at how these have changed over time.

There are three theories about what happens to social trust in times of social stress. Some researchers believe that people come together; some that they fall apart. Others say that the level of social trust is established early in life and that subsequent events change little.

“We found those three kinds of patterns,” Wu said.

The three authors began a standard Angus Reid survey of approximately 2,500 Canadians, taken in September 2019, just before the pandemic hit. That survey asked a series of routine questions, such as: Would you say that most people can be trusted?

Wu took that original data and returned to the same respondents seven times through February 2021.

Canadians are among the world’s most trusting people, Wu said, registering levels of trust that were twice as high as, say, Americans. Despite COVID, he said, they still are.

1 in 3 Canadians are willing to change jobs to keep working from home: Ipsos poll

For about two-thirds of the respondents, general trust in society and its institutions has improved somewhat during that time. About 58 percent trusted their neighbors a little more after the pandemic than before.

“I was concerned about social trust, that there could be a huge drop,” Wu said. “But the research shows that’s not the case.”

About 19 percent registered little change in their general feelings of confidence. Nearly a quarter felt the same toward their neighbors as they did before COVID.

But nearly 18 percent of respondents registered a sharp decline. When Wu cross-indexed that data with information about income and economic security, the pattern was clear.

“Lower income Canadians with lower socioeconomic status have lost more confidence due to the pandemic.”

It’s all about control, Wu said.

A large body of previous research suggests that people who feel in control of their lives and can determine their own destiny tend to be more confident. Those people are usually better off economically.

“In all societies you see that people with higher incomes have more confidence.”

Trust is risky. Those with more resources are better able to take on that risk, Wu said.

Canadians eager for post-COVID-19 ‘normal’ but mixed on how to get there: Poll

“It’s really about whether these people have the resources to take the risk. Socio-economic status is the strongest indicator of confidence, even before the pandemic.”

That appears to be what happened in Canada during the COVID-19 pandemic.

He said the study is a powerful lesson for any politician interested in building a more cohesive Canada.

“Inequality is a predictor of why confidence continues to decline. We need to think about how we can foster trust.”