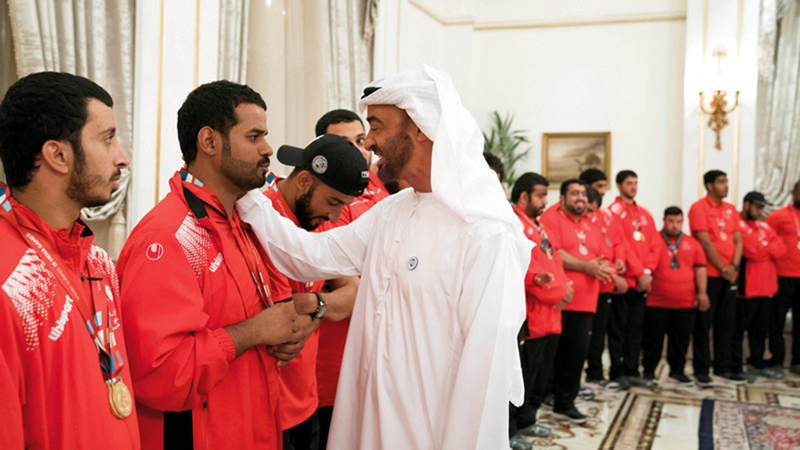 His Highness Sheikh Mohammed bin Zayed Al Nahyan, president of the state, shows great interest in determined people, and his speeches and statements have always emphasized strengthening the sons and daughters of the nation of determined people and achieving their aspirations, and the equality of all groups in attention and support without discrimination.

His Highness launched a comprehensive strategy for determined people in Abu Dhabi 2020-2024, with the participation of more than 28 relevant local and federal government agencies, led by the Abu Dhabi Department of Community Development, with the aim of making the emirate an inclusive and prepared city on determined people, in line with the department’s vision to provide a decent life for all members of society.

At the time, His Highness Sheikh Mohamed bin Zayed Al Nahyan said: “We have launched the Abu Dhabi Strategy for Determined People. We remain committed to empowering our determined sons and daughters and fulfilling their ambitions.”

The strategy covers all phases of a determined person’s life and covers key areas such as health and rehabilitation, education, employment, care and social protection, and participation in public social life, sport, cultural life, entertainment and tourism. It also focuses on comprehensive access and a qualified environment in terms of buildings, facilities and transportation, housing and other such information and services.

The strategy covered key capabilities, such as quality of services and sustainable finance, with the aim of achieving the mission of supporting determined people and their families in the face of an integrated system that provides quality services to enable them to to participate actively in society.

She emphasized that the agenda of integrating determined people is everyone’s responsibility, through the principle of mainstreaming the issue of disability in all policies, programs and services of all competent authorities in the emirate, and by emphasizing the role of determined people in the execution of the strategy through leadership and representation for determined people.

In March 2019, His Highness Sheikh Mohamed bin Zayed Al Nahyan received the Supreme Committee and the organizers of the Special Olympics World Games “Abu Dhabi 2019”, and His Highness said at the time, “Thanks and appreciation to everyone who contributed to the achievement of the goals of the Olympic Games, and convey the UAE’s humanitarian message to the world, about the importance of solidarity with determined people, and empowering them in their communities, to move them from the stage of accreditation to the stage of participation, effectiveness and influence.”

His Highness added that the success of the UAE’s organization of the Special Olympics for the World Games is the culmination of its interest and efforts to empower people with determination, work to integrate them into society and fulfill their role in various fields. of national action as they are partners in the process of development and progress, emphasizing that supporting determined people has become part of the strategic plans of the state to give them more opportunities and to promote solidarity and synergy between reach all segments of society.

His Highness said: Caring for determined people and providing integrated care in accordance with the highest international standards is at the heart of the state’s plans and programs to empower them, to become producers and collaborators at the service of their country. .