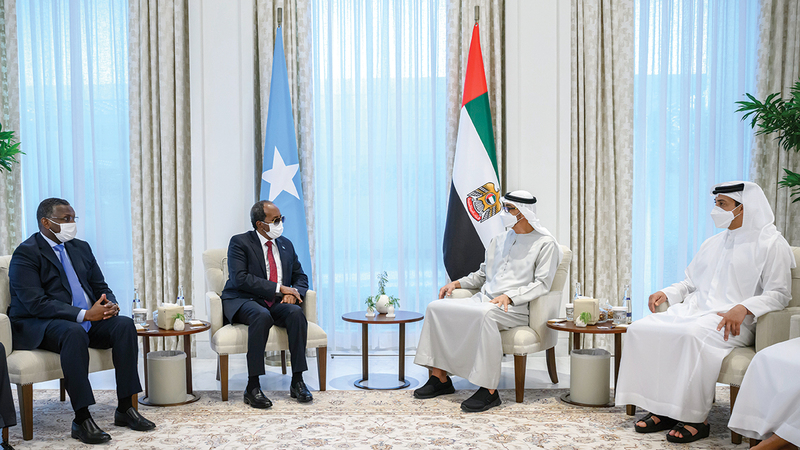 His Highness Sheikh Mohamed bin Zayed Al Nahyan, President of the State, reaffirmed the UAE’s continued support for all that is in the interest of the fraternal Somali people, and to realize their aspirations for development, stability and prosperity and a better future build up for their children of peace and prosperity.

This happened when His Highness yesterday at the Shati Palace received the President of the Federal Republic of Somalia, Hassan Sheikh Mahmoud, where His Highness welcomed his visit to the country and congratulated him on assuming the duties of the Somali presidency, wishing him success in leading his country and realizing his people’s aspirations for stability, progress and peace.

While the President of the Republic of Somalia expressed his appreciation for the historic positions of the UAE and its continued support for his country, expressing his gratitude for the good feelings of His Highness towards the Somali people, and his wishes for the UAE, under his leadership , further progress and development.

His Highness and President Hassan Sheikh Mahmoud discussed the fraternal relations between the two countries and the possibilities to enhance joint cooperation between them in various fields, especially development and peace efforts in fraternal Somalia.

His Highness Sheikh Mohamed bin Zayed Al Nahyan reaffirmed the UAE’s commitment to support the fraternal Somali people to consolidate their state-building and move forward towards a future of peace and stability based on the brotherly ties between the two countries. and their peoples, emphasizing the UAE’s willingness to strengthen the efforts of the Somali government and state institutions to build, develop and promote stability.

For his part, the Somali President expressed his ambition to work towards developing cooperation between the UAE and Somalia to meet the aspirations of the peoples of the two brother countries and contribute to increasing stability and security in the region.