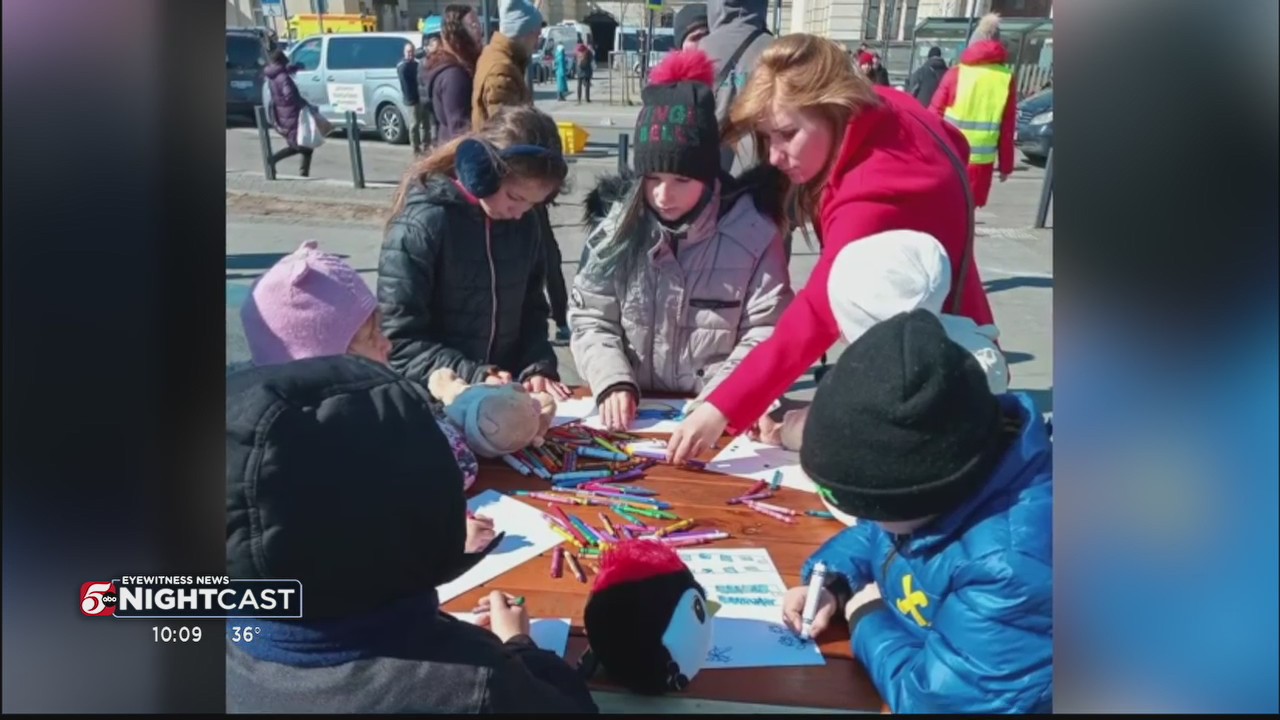 “This is where you can see what someone’s been exposed to,” says Howard Dotson, pointing to a child’s drawing of several buildings ablaze and an artillery piece pointing at them. “They came from Kyiv, where there’s bombings.”

That drawing, is one of hundreds from the front lines.

The artists: Ukrainian children fleeing from the horrors of war.

“Kids heal through play,” Dotson, a healthcare chaplain and an art therapist explains. “Art is universal. The images they create, I can usually tell what they’re drawing.”

After spending nine days in Ukraine and Poland, he’s back home in Fridley. His mission is to help kids heal.

“I’ve been doing art circles with refugee children since 2016. I’ve been to Beirut three times,” Dotson, a US Army veteran, declares. “I could not be here, knowing what’s happening, that maternity hospitals are being bombed. I knew that innocent lives were going to be lost. These children need psychological first aid.”

The United Nations refugee agency, and UNICEF, say more than 4 million Ukrainians have fled the country in search of safety.

Half of them are children.

So on March 11, Dotson went overseas, traveling on the European rail lines used by refugees fleeing from Ukraine into Poland.

Carrying 50 pounds of donated crayons and 1,000 pieces of paper, he hosted ‘art circles.’

“They can be kids again, a lot of times vicariously,” Dotson notes. “The trauma and the stress that a mom is under, ‘cos it’s just mainly moms and children. Dads have to stay back.”

He says he hosted the circles at five different train stations with hundreds of kids, many of whom were proud to pose with their work.

“In that circle, the kids start to giggle, and they are supporting each other. It’s a way of coping … for them to have an activity,” Dotson says. “And then one girl sees another drawing a heart, and that inspires her to make a heart as well.”

Some of the drawings are whimsical. One says ‘I like the USA.’ Another has a portrait of Ukrainian president Volodymyr Zelenskyy. A third shows a house with someone holding a giant heart outside.

“One of the questions I asked the kids is, picture your home,” Dotson says. “Picture the day that you’re going to go home again. So a lot of them are drawing their houses.”

Still, some drawings have darker themes.

Dotson says he occasionally would refer a child to counseling, psychological first aid, as he calls it.

We asked about one particular drawing.

“The buildings are on fire. A lot of shelling in Kyiv,” Dotson says quietly. “We would especially do art when the air raid sirens are going off so that the kids can be distracted and cope with the anxiety of hearing that, fearing it was going to happen again.”

But leaving for home, he says about 200 of the young artists gave him their work as a parting gift.

“I would ask them, do you want to keep it, or you want me to take it to America?” Dotson grins. “And 99% of the time, they smiled with pride, [and] know that their picture was going to America.”

He says he’s raising funds for other art circles in Ukraine and Poland with volunteers from England, Cincinnati, and the Twin Cities.

Dotson says he’d also like to return to Ukraine.

Even so, he worries about so many young lives in harm’s way, and he hopes for their safety.

“We haven’t seen this since World War II,” Dotson says. “And it’s going to be a long healing process for these kids.”