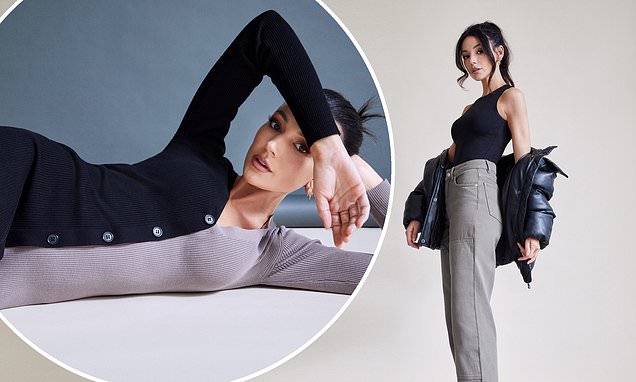 Michelle Keegan brought fall chic as she modeled a range of stylish ensembles from her new collection with Very in a show-stopping photoshoot.

The Coronation Street actress, 35, looked effortlessly glamorous as she struck a series of poses to show off her new range, which launched online Friday.

The 43-piece collection includes a variety of fall textures, animal prints and soothing neutrals for dresses, sweaters and jackets, ideal for the cooler weather.

In a sizzling photo, Michelle showed off her lithe figure in a slim-fitting black camisole and gray straight-leg jeans.

She gave herself a few extra inches with a pair of black strappy stilettos and slung a leather jacket around her shoulders.

Mark Wright’s wife swept up her chocolate locks in a high ponytail while letting two strands fall loosely to frame her face.

She enhanced her natural good looks with a natural makeup palette as she turned up a storm for the glamorous snaps.

In another photo, Michelle posed in a black and gray cardigan style dress, which hugged her enviable curves.

She also opted for a more dressy ensemble in a black and white printed collared mini dress, which she paired with chunky beige heeled boots.

The Our Girl star also paired black jeans and a cream camisole top with a fuzzy white jacket while nailing another fall outfit.

She showed off her modeling details in a £45 white turtleneck sweater with tassel sleeves, which she paired with black skinny jeans and black heeled boots.

Michelle also modeled a gray button-down collared dress from her collection, as well as a cozy cream jacket.

Prices for the new collection range from around £30 to £85, with all products for sale on Very’s website.

Her launch comes after Michelle returned to filming comedy-drama Brassic this week after working in Australia for four months.

Season four of the hit show premiered earlier this month.

In October last year, Michelle admitted that she had banned her family from watching one episode of the show because of a raunchy sex scene, she told Radio Times.

“I didn’t let my family watch that first episode for 15 minutes, and we all know why!” she said with a laugh.

Speaking to The Guardian, the former soap star revealed how she still hadn’t adjusted to becoming a household name.

“Even now, 15 years later, you never get used to being famous,” she said. “One minute I was walking out the gates of Coronation Street and no one knew who I was.

“Then, as soon as my first scenes hit the screen, I remember walking out the gate and being stopped and asked for an autograph. I had no idea how to sign.’

The award-winning performer, who will go on to star in a 1950s BBC drama Ten Pound Poms in Australia, has gone on to star in prime-time dramas such as Our Girl and Brassic.

The businesswoman is also busy with online retailer Very and recently released a new collection with the brand.

Michelle and her husband Mark are also getting ready to move into their £3.5million Essex mansion which they have been renovating for two years now.