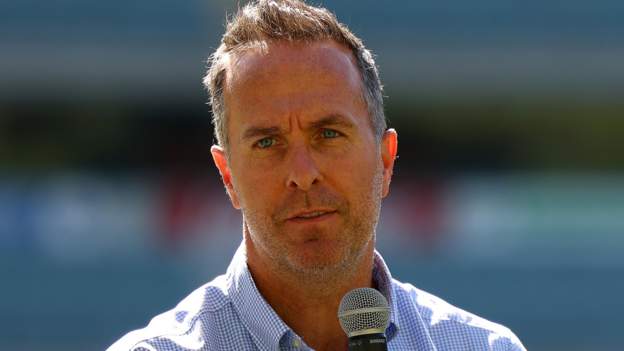 Former England captain Michael Vaughan is taking a step back from his job at the BBC amid “ongoing dialogue” surrounding the investigation into racism in Yorkshire.

On Monday, a joint letter from two groups of BBC staff expressed concerns over the 47-year-old’s continued involvement in the broadcaster’s cricket coverage.

Vaughan was mentioned in the Yorkshire report in Azeem Rafiq’s claims about racism.

He has denied charges that he made a racist remark against a group of Asian players.

Vaughan was not involved in the BBC’s coverage of the Ashes in Australia over the winter, but returned to comment in March.

The news of the ECB’s charges came before England played New Zealand at Headingley in the third Test – the first international match to be held on the ground since the scandal.

On Monday, the BBC said it acknowledged staff had expressed concerns in an open letter challenging Vaughan’s recovery at the company.

The letter was sent to staff by groups representing black, Asian and ethnic minorities.

“It’s always unfortunate when commenting on matters off the pitch distracts attention from what’s happening on the pitch. Given the ongoing dialogue on the subject, I’ve made the decision to step down from my job for the BBC for a while. are,” Vaughan said in a statement.

“The main motivation for this is my concern for the well-being of my family members and my desire to protect their family life. Taking a temporary step back is also in the interest of the game and I hope it will minimize any problems for my colleagues.”

In a statement, the BBC said: “Following discussions with Michael Vaughan, we have accepted his decision to step down from our cricket coverage. This is a decision we respect and understand. Michael will remain under contract with the BBC.”

According to Rafiq, Vaughan said “too much of you, we need to do something about it” to him and three other Asian players during a match for Yorkshire in 2009.

The fourth player in the group – bowler Ajmal Shahzad – previously told the Daily Mail that he had no recollection of the event and that “the seniors were very good to me”.

Vaughan has previously said he did not remember the incident or recognize the words he claimed he used.

“I just clearly remember being so proud that we had four Asian players representing the Yorkshire County Cricket Club,” he said.

in a interview with the BBC in November, he said he was “sorry for all the pain” Rafiq had gone through.

Vaughan captained England in Tests between 2003 and 2008. He played his entire domestic career with Yorkshire – between 1993 and 2009 – before becoming a BBC Test Match Special summary.