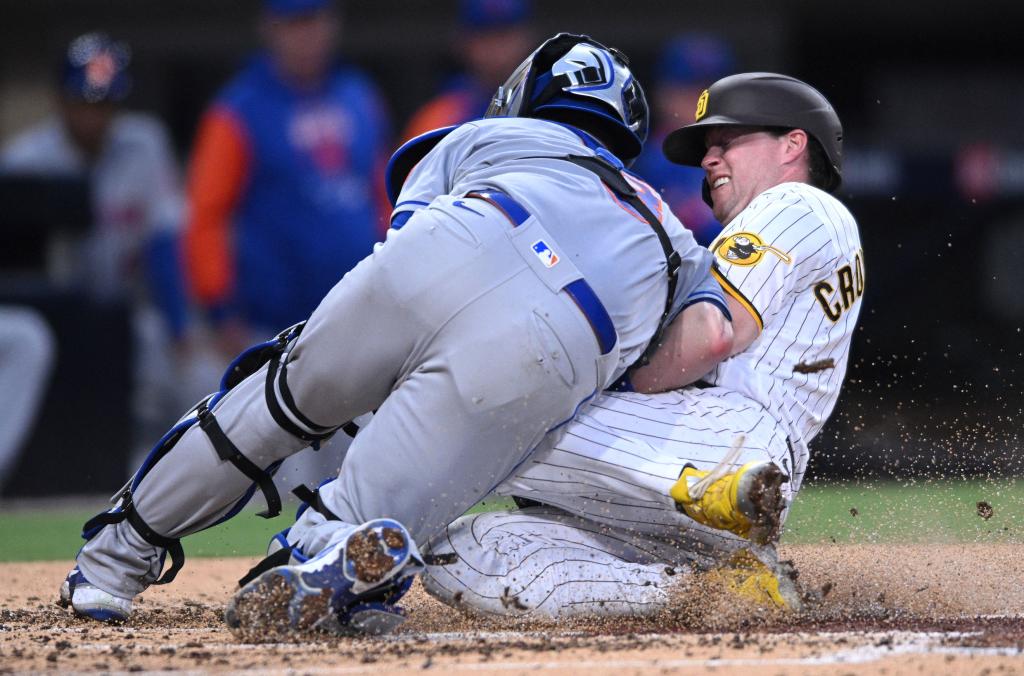 SAN DIEGO — The Mets had lost three more times in a row this season, but they were at least competitive in the process.

In the last two games of this series at Petco Park, there wasn’t as much as a growl from the Mets, let alone a sign of combat. Wednesday-evening was the lone Mets-highlight that ended the game.

And with that came a 13-2 loss to the Padres that gave the Mets a third series loss this season. The loss was their fourth in seven games during this trip to Southern California.

The Mets will at least get a day off on Thursday before opening a weekend series against the faltering Angels. The crew of manager Buck Showalter ended this series with two losses by a combined 20-2 count.

While the Mets received positive news ahead of the game that Pete Alonso and Starling Marte appear to have avoided serious injuries and extended absences, the lineup is lacking in the near term.

Jeff McNeil’s infield single in the second off Sean Manaea was the Mets’ lone hit until Eduardo Escobar singled in the seventh. The Mets ended with five hits.

The night before, Yu Darvish took a no-hitter into the sixth inning before Mark Canha singled with two outs, and the Mets scored a total of two hits against Darvish and the bullpen of the Padres.

On Wednesday, in his second clunker in four starts, Chris Bassitt gave up seven runs (one unearned) on seven hits with six strikeouts and two walks over 3 ¹/₃ innings. During the Mets’ previous road trip, in late May, the right-hander had his worst start in a Mets uniform (in terms of allowed runs). In that start, he gave up eight earned runs over 4 ¹/₃ innings in San Francisco.

Since pitching to a 2.34 ERA in his first seven games with the Mets, the righthander has been struggling. Over his last five starts, he has a 7.62 ERA. Overall, his ERA has surpassed four for the first time this season and stands at 4.35.

Bassitt’s last pitch of the evening was a slider in the fourth inning that Jake Cronenworth scored for a double-run double that buried the Mets in a 6-0 hole. Manny Machado greeted Stephen Nogosek with a double that brought in the last run of the inning and completed Bassitt’s line.

Jorge Alfaro’s single and Trent Grisham’s walk started the rally, before Tomas Nido misplayed the sacrifice bunt by He-Seong Kim, enabling the runner to reach the bases and load it. Jurickson Profar hit a two-run single that gave the Padres a 4-0 lead before delivering Cronenworth.

Bassitt had a hard time from the start and gave up a walk and two basehits in the first inning. The last of those hits, by Nomar Mazara, resulted in a point. In the third, Machado pulled out an RBI double that extended the Padres’ lead to 2-0. A throwing error at the plate by Francisco Lindor made Machado move to third base, but Bassitt struckout Luke Voit and Mazara in order to escape the inning.

The offense continued in the fifth, when Nogosek gave up four runs. After Profar delivered an RBI double, Cronenworth hit a towering three-run homer to right field that buried the Mets in an 11-0 hole. JD Davis’ missed catch on a popping error to first base extended the inning, allowing the carnage to continue. Nogosek would otherwise have thrown a scoreless frame.

The Mets didn’t score until the seventh, when McNeil lined out to Manaea for an infield RBI single. Luis Guillorme grounded into a double play to bring in another run.