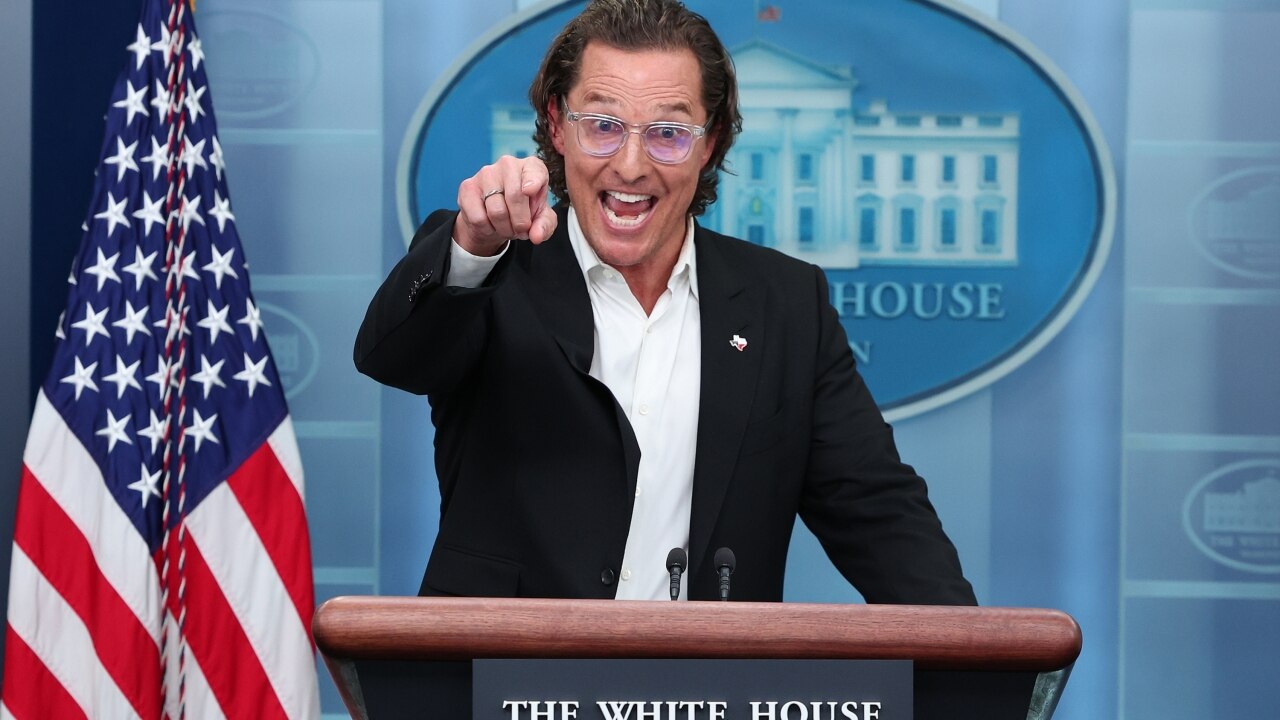 The real strength of McConaughey’s speech came from the fact that he didn’t care to score cheap partisan points or put one side of the gun debate over the other, but to appeal to all Americans — regardless of their views on guns.

I can’t get the image out of my head.

That pair of green Converse sneakers, held on her knees by Matthew McConaughey’s wife, Camila, as he spoke with burning passion at the White House about the school massacre in Uvalde, Texas.

The simple hand-drawn black heart above the big toe on the right shoe.

They belonged to Maite Rodriquez, a 9-year-old girl who was so horribly destroyed in her class that the signature sneakers were the only way to identify her afterwards.

I have a 10 year old daughter who wears sneakers and loves to draw.

I cannot comprehend the magnitude of such horror.

I don’t want to understand.

McConaughey, born and raised in Uvalde, didn’t try to make sense of it.

Instead, he stood on the most powerful stage in the world, his voice quivering with raw emotion, telling us the stories of each of those 19 young victims.

And when he got to Maite and her sneakers, I felt tears prick my eyes.

“Maite wore a green high Converse with a heart that she had hand drawn on the right toe as they represented her love of nature,” he said.

Then he spoke to his wife, sitting quietly to the side.

The camera shifted to the sneakers that were on Camila’s knees.

Then he spoke to his wife, sitting quietly to the side.

The camera shifted to the sneakers that were on Camila’s knees.

“I wore these every day,” McConaughey continued. “Green Converse with a heart on the right toe.”

As Camila and the watching world looked down on them, she was suddenly overcome with fear because she knew what her husband was going to say next.

“This is the same green Converse at her feet,” he continued, “which turned out to be the only clear evidence that could identify her after the shooting.”

Then McConaughey slammed angrily on the lectern.

“WHAT’S UP WITH THAT?!” he exclaimed, anger and fear stamped on his face.

There has never been a more powerful or heartbreaking moment in the White House briefing room.

And McConaughey, who had spent many days in Uvalde with Camila since the shooting, spared no detail as he explained why no one could identify Maite Rodriguez or many of her murdered classmates.

He mentioned a meeting with a beautician in town who specializes in make-up for morgues.

“That’s the job of making the victims look as peaceful and natural as possible when they look into the open coffin,” he said.

“These bodies were very different. They needed much more than makeup to be presentable. They needed an extensive restoration. Why?

“Because of the exceptionally large exit wounds of an AR-15 rifle. Most of the bodies were so mutilated that only DNA tests or green Converse could identify them. Many children were not only left dead, but also left hollow.”

This was a groundbreaking moment in the gun violence debate in America, the moment that I believe will have shaken most Americans to their core, as it shook me.

Once you have those horrific images in your head, there is no escaping them.

And there must be no escaping it.

The real strength of McConaughey’s speech came from the fact that he didn’t care to score cheap partisan points or put one side of the gun debate over the other, but to appeal to all Americans, regardless of their views on guns.

As I watched him go back to an interview we had together 18 months ago, McConaughey expressed his frustration at the way Democratic debate was being suppressed by the loudest, craziest voices.

“The far left and the far right make the other side completely illegitimate,” he told me at the time, “or they exaggerate that side’s attitude to an irrational state and that’s not fair if either side is doing that. I would say we have no real confrontation right now, a confrontation that gives some validation and legitimizes the opposing point of view. We’re making it persona non grata, and that’s unconstitutional.”

Yesterday, he rose to the challenge of defying such pernicious orthodoxy in a great way.

McConaughey said Uvalde was where he learned “responsible gun ownership.”

And instead of demonizing responsible gun owners, as so many of his liberal Hollywood colleagues prefer to do after every mass shooting—and yes, as I myself have done in the past—he respectfully appealed to them to be a part of the solution.

He explained that among the grieving families of the dead children, “Texas Rangers, fighters, border patrols and responsible gun owners who will not give up their Second Amendment right to bear guns” — but said they all wanted the same thing: “Safe and secure schools and gun laws that don’t make it so easy for the bad guys to get these damn guns.”

McConaughey called for more investment in mental health, safer schools, less “sensational coverage” in the media about mass shootings and new gun control measures, including better background checks and red flag laws, age limits for AR-15s to be raised from 18 to 21 and longer waiting times for such guns.

But it’s what he said about American values ​​that had the most impact.

He urged his compatriots to put child safety above politics, find common ground, be humble, knowledgeable and wise, look in the mirror and remind themselves what it means to be American.

And he urged them to do so to ensure that the American dream is not an illusion, reminding us of the dreams those poor butchered children had before their lives were wiped out.

“I want to graduate school to attend my dream college Corpus Christi, by the ocean,” Maite wrote. “I have to live next to the ocean because I want to be a marine biologist. Marine biologists study animals and the water. Most of the time I will be in a lab. Sometimes I come on TV.”

Ana wanted us to see her little girl’s heartbreaking letter so it could encourage others to make their dreams come true.

An America where such dreams cannot come true because children are repeatedly shot at school is certainly not an America that wants an American.

Inevitably, McConaughey’s speech sparked outrage from those on the political extremities, as he knew.

Right-wing parties attacked him for “Hollywood hypocrisy” and leftists attacked him because he did not demand that guns be banned.

An embarrassing apology for a journalist even shouted, “ARE YOU GREAT?!” to him when he left.

No, he wasn’t – although ironically, that reporter was.

What Matthew McConaughey did yesterday was to change the tone of the arms debate from toxic, politically motivated mud-slinging to respectful, constructive rhetoric intended to unite Americans on an incredibly divisive issue and create real lasting change that will save lives.

As he said, it’s not a panacea, but it’s something.

“Where do we start?” he asked. “We’re starting to matter with the loss of these lives.”