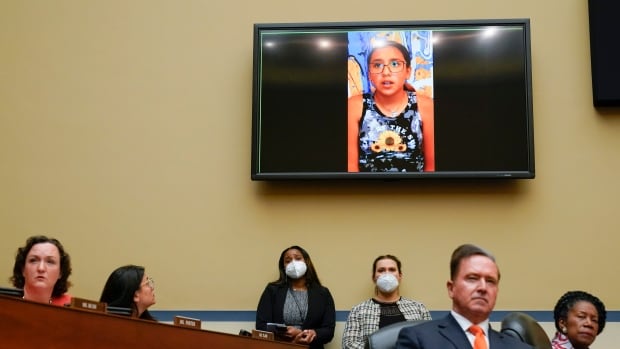 WARNING: This story contains graphic descriptions of violence and death.

A fourth-grade survivor of last month’s mass shooting at a Texas elementary school told US lawmakers that after the gunman killed her teacher and friends, she dabbed herself with blood in a desperate attempt to survive.

Miah Cerrillo and the parents of several young Americans killed and injured in recent mass shootings testified before a congressional panel on Wednesday as lawmakers work to compromise a gun safety bill.

“He said ‘good night’ to my teacher and shot her in the head,” Cerrillo said in a pre-recorded interview played before the committee.

“He shot my friend who was sitting next to me and I thought he was coming back to the room so I got a little blood and smeared it all over me,” she added.

The young girl said she feared such violence at school could happen again.

The hearing by the US House Oversight and Reform Committee comes about two weeks after a shooting by an 18-year-old at Robb Elementary School in Uvalde, Texas, which killed 19 students and two teachers.

This video contains content that some viewers may find shocking. Miah Cerrillo, a fourth-grade student who survived the Uvalde, Texas, mass shooting, described how she evaded the gunman while he killed her classmates.

It was one of a spate of mass shootings in the United States in recent weeks, killing dozens and sparking another round of bipartisan talks in the US Senate. With Democrats and Republicans deeply divided over guns, the talks have focused on modest goals, including encouraging states to pass “red flag” laws to refuse firearms to people deemed a risk to themselves or the public. .

Republicans, who strongly support the right to have and carry weapons as protected by the Second Amendment to the US Constitution, have objected to proposals such as restricting sales of the assault rifles used in the Uvalde massacre and another. mass shooting at a Buffalo, NY, a grocery story that killed 10 black victims.

‘As her voice, we demand action’

The sobbing parents of one of the dead Texas students, Lexi Rubio, also testified.

After reading the names of the dead students, Kimberly Rubio talked about dropping her 10-year-old daughter off at school and promised her an ice cream later that night.

“In the reel that keeps scrolling through my memories, she turns her head and smiles back at us to acknowledge my promise, and then we left,” Rubio said. “I left my daughter in that school and that decision will haunt me for the rest of my life.”

Gabby Giffords urges US lawmakers to be brave with guns

Description: Former congressman and gun crime victim Gabby Giffords held a news conference in front of the Washington Monument on Tuesday, urging Democratic and Republican lawmakers to have the courage to “do the right thing.”

Rubio wants lawmakers to ban high-capacity assault rifles and magazines, and expand background checks on gun purchases and red flag laws that keep guns out of the wrong hands.

“As her voice, we demand action.”

Other witnesses were affected by the Buffalo massacre — allegedly by an outspoken white supremacist — including a victim’s mother and the city’s police commissioner.

‘He didn’t have a chance’

Joseph Gramaglia, the commissioner, spoke about the murder of armed guard Aaron Salter Jr., at the Tops supermarket location in Buffalo.

“It’s often said that a good man with a gun will stop a bad guy with a gun,” Gramaglia said. “Aaron was a good guy and was no match for what he came across – a legal AR-15 with multiple high-capacity magazines. He didn’t stand a chance.”

Later in the session, Gramaglia said he preferred “sensible rules that would limit the carnage on our streets”.

When appearing before a US House committee investigating gun violence, Buffalo Police Commissioner Joseph Gramaglia challenged the idea that “a good man with a gun will stop a bad guy with a gun.”

Zeneta Everhart, whose 20-year-old son Zaire was injured in the Buffalo shooting, told lawmakers it was their duty to legislate for Americans. She said that if they didn’t find the testimony moving enough to comply with gun laws, they would have been invited to her home to help her clean her son’s wounds.

“My son Zaire has a hole in the right side of his neck, two on his back and another on his left leg,” she said, then paused to calm down. “As I wipe his wounds, I feel bits of that bullet in his back. Shrapnel will remain in his body for the rest of his life. Now I want you to imagine that exact scenario for one of your children.”

Debate on age limits, other measures

After the hearing was over, the Democrat-led House passed legislation that would raise the age limit for purchasing a semi-automatic rifle and ban the sale of ammunition magazines with a capacity of more than 10 rounds.

But the legislation has almost no chance of becoming law as the Senate conducts negotiations aimed at improving mental health programs, strengthening school safety and improving background checks. The House bill gives Democratic lawmakers a chance to determine where voters stand on policy ahead of November’s midterm elections.

AR-15-style rifles are popular among American firearms owners, but their use in countless school shootings has also made them one of the most controversial.

Rather than push for a quick vote on the sweeping bill, Senate Leader Chuck Schumer has chosen to spend more time on the bipartisan negotiations.

Democrats have tried in the past to pass broad gun control laws to stem the tide of mass murders, which number more than 200 in the United States this year alone, and other gun-related violence.

This time, Democrats have signaled to Republicans that they would be willing to accept a much narrower first step with legislation, even as US President Joe Biden calls for tougher measures, such as banning assault weapons.

Among the Republicans called to testify for Wednesday’s hearing were Lucretia Hughes of the DC Project Women for Gun Rights. The group says it “encourages the preservation of American gun culture” while raising awareness of firearms safety.