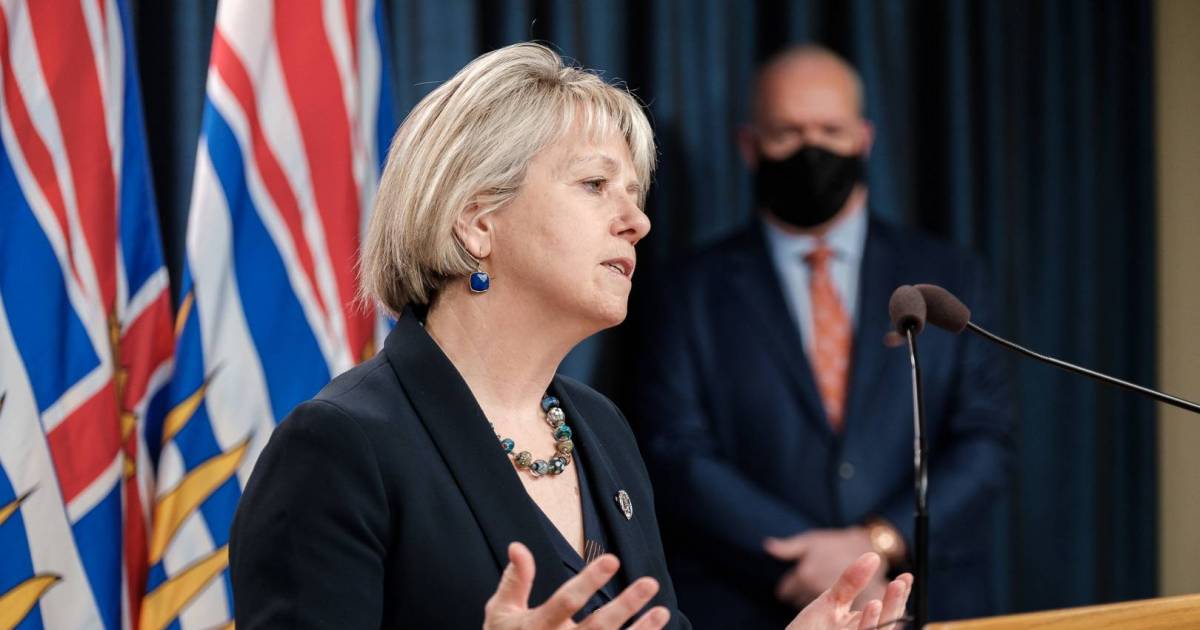 Okay, so there’s probably a snowball chance in hell that Dr. Bonnie Henry would one day leave her inexplicable post as British Columbia’s globally acclaimed medical health officer to run for NDP leadership and thus become BC’s next prime minister.

I don’t know if anyone has already asked her to specifically rule that out. But if nothing else, perhaps this article will at least serve that purpose.

I shudder to think she might become ambiguous if one of her cheerleaders in the legislative press forced her to officially put that nightmare scenario to rest, if she hasn’t already.

Still, the task would likely be up for grabs if BC’s COVID commander were ever lured out of her cozy foxhole to take politics as her ultimate calling.

Sure, Henry’s popularity has taken a flesh wound since her early killer virus days as bubbly BCs. “Our question is not why. It is up to us to do or die,” general.

But according to Angus Reid’s March poll, she was still high on her throne as British Columbia’s COVID Queen.

About 68 percent of her subjects still rate her job performance as good or very good, more popular than any of her counterparts east of the Maritimes.

Anyone vying to be crowned prime minister would kill for those numbers.

A Bonnie legend in her own day, Queen Henry is now: glistening in her own eminence, decked out in her namesake Fluevogs and bestowed with five honorary degrees†

Further immortalized in print by her own co-authored testament of her greatness.

Mind not the blatant human toll Queen Henry’s bloody insistence on her own infallibility has inadvertently taken on BC, as I have recently emphasized.

Most British Columbians continue to ignore the harsh truths so skillfully flagged and repeatedly explored by the straights Charlie Smith and Martin Dunphy. [See related stories.]

War is hell, as they say, here and everywhere, and the truth is usually the first casualty.

It is true that Henry bravely fought the good fight.

Typically, with disarming serenity and “power is good” conviction.

Who are we, poor pawns in the wider strategic campaign to question the wisdom of her sometimes imperious edicts, some may have wondered? Twitter is certainly on fire with detractors who believe they have been fatal to some of its ill-fated retainers.

Indeed, I can never think of anyone in BC history who has been so universally acclaimed by the mainstream media as this province’s health tsar, who deserves our plea, blind trust and obedience.

Howdy! We’ve seen this occasional true story before and it’s a riot.

There can be no doubt about this: Dr. Henry is certainly a natural born politician who would probably imitate the NDP as their leader, if she had any inclination to take on that mantle.

That would be quite a coronation, wouldn’t it? And too unlikely to imagine.

If winning is the only name of the game, who better to lead the NDP than the person most responsible for John Horgan’s popularity?

Who better to be anointed prime minister by his party supporters than the person arguably most responsible for his mass majority government, thanks to the blessing she offered his opportunistic early election?

Those were Henry’s gifts to the NDP in doing its job the way it saw fit, politically informed at every turn.

Political skills? She has beaten all other potential NDP leaders by a COVID mile.

Hell, she was in fact BC’s de facto prime minister for the past two and a half years, ruling as many facets of our lives as she essentially did.

And her war-blown gaslighting caused more than a few journalists to lose their positions in deference to her undisputed expert authority.

Where would Horgan’s government be today, one wonders, were it not for the “one question, one follow-up to those who play nice” protocol launched and enforced as the COVID rule for called journalism?

I expect that in years to come people will look back at this time in BC history and shake their heads in amusement, as we do when we look at all those war propaganda news rolls of yesteryear.

No one has been so master of his own rosy destiny as Dr. Henry – a credit to her mastery of the fine art of crisis communication.

Anyway, who doesn’t love a war hero in power when there’s hope on the horizon and it feels like the worst battles are behind us?

From George Washington to Dwight D. Eisenhower, it has been the career path of many American presidents.

Damn, if a wiry, vicious drunk like American Civil War hero Ulysses S. Grant could repent? to be With deadly leadership and disgrace to a successful bid for the presidency, BC’s ruthlessly sunny, studious, level-headed and ever-smart COVID chief would certainly be a shoo-in for BC’s top political job, if she ever wanted to try.

Rest in peace David Eby and anyone who may be hoping to become BC’s next Prime Minister.

The good doctor is probably far too committed to her lifelong calling and professional passion to ever give up on politics proper.

Through her storied experience of the past 30 tortuous months, she is now all too keenly aware of what the prime minister’s job really entails.

She knows that the next prime minister will have an almost impossible task to bring order to chaos in the muddy policy wastelands BC now confronts in all its barbed wire horrors.

COVID is just one of those daunting challenges.

I suspect it is not something that a Prime Minister would easily give Henry over to someone else to lead as Horgan has done.

Indeed, if she were prime minister, it would be interesting to see how malleable she could be in upholding the principle of independent autonomy accorded to the provincial health officer.

Could she beat Kevin Falcon’s BC Liberals, or whatever else they get to do when BC goes to the polls?

Like Generals MacArthur, Patton and Marshall, she would be virtually unstoppable. Falcon’s troops wouldn’t know what hit them.

But for Queen Henry, that would certainly be a Pyrrhic victory.

If only because it would expose her again to even more vicious political attacks than she has endured in her current capacity.

Plus, it would probably prove she’s someone best suited to looking through the magnifying glass, rather than the other way around.

As Prime Minister, there would be nothing to protect her from the “take-no-prisoners” unwanted political scrutiny she needs from all people like a dose of prolonged COVID.

Ah, but you can dream, new Democrats.

And take comfort in all that could have been, comforted by the knowledge that whoever you choose to lead your party and our province holds the potential for new life.

No matter who holds BC’s next top job in government, the polls suggest they will still benefit from Henry’s mythical rule.

One day, perhaps in the not-too-distant future, when Eby or one of his other cabinet colleagues is sitting in the prime minister’s office, they may reflect on how lucky they were to have turned down the draft of today’s wishful thinkers.

Who knows, who knows, that Prime Minister may choose to pay her ultimate respects by Dr. Henry’s name to the federal government as BC’s favored candidate to the Hon. Janet Austin as Lieutenant Governor when her term ends in 2023?

Don’t you think that can happen? That just happened in Queensland, Australia, where the former medical health official, Jeannette Young, was recently appointed governor of that state.

Let’s also rule out that speculative future appointment while we’re at it — something Dr. Henry would probably like to volunteer too if asked.