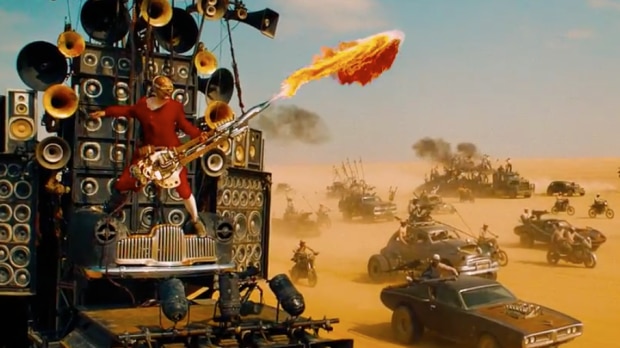 With the Mad Max production car in southern NSW, the host city of Hay is getting a much-needed economic boost.

Hundreds of film crews have descended on the western city of Riverina to begin filming Mad Max: Furiosa.

Businesses report an increase in the number of customers and hotels have been fully booked since March.

Hotel manager Amiel Rabbelier said the influx of people into the city has been great for business, especially since the COVID-19 pandemic.

“You will notice the cafes and restaurants, they all become [a] hit,” he said.

“Especially on the weekends, when a lot of the people working on this film here are off and hanging out in town spending money.”

Mr Rabbelier said there was a lot of work being offered as companies tried to provide to the visitors.

“People are hiring everywhere, we can’t get enough staff here,” he said.

A return to regional NSW

The final film in the Mad Max series, Fury Road, was set to be shot in the far west of the state. But then Broken Hill was too green and production shifted to Namibia, in southern Africa.

Film production has since returned to regional NSW and will next move to Silverton, near Broken Hill.

Details about Furiosa, which is being directed by George Miller, are shrouded in secrecy and local participants have signed non-disclosure agreements.

It is clear that the filming in Hay has been mainly for stunt work and the main actors of the film, such as Chris Hemsworth, are not expected to visit the town.

In the past, Mad Max movies were action packed, complete with explosions and daring stunts.

While technology has come a long way since the original 1979 movie starring Mel Gibson, location filming is still necessary.

Cafe manager Megan Griffiths, who has lived in Hay all her life, said it was the busiest the city had ever been.

She said her cafe sold more than 220 coffees in one day.

“The mornings are much busier than usual. They usually leave a little earlier than we would normally start,” said Ms Griffiths.

Hay Shire Council Mayor Carol Oataway said the farming town of about 2,500 people was recovering from more than just a COVID-19 crisis.

“We have just come out of a very long drought and confidence was at an all-time low,” said Ms Oataway.

“We had businesses closing on the high street, we had a shrinking population, school enrollments dropped.

“It’s nice to feel that we’re getting out of that and we have some confidence in the city.”

Residents of Hay also enjoy the 15 minutes of fame that the city brings.

“Unfortunately with COVID it has been very quiet. I think people were nervous to get out there, but I feel like there’s a real buzz about the city again,” she said.

When asked if he would compare Hay to Hollywood, Mr Rabbelier said it was more like “Haywood”.

“It definitely has that feeling. It’s something big to be a part of, so I think everyone is excited in some way,” he said.