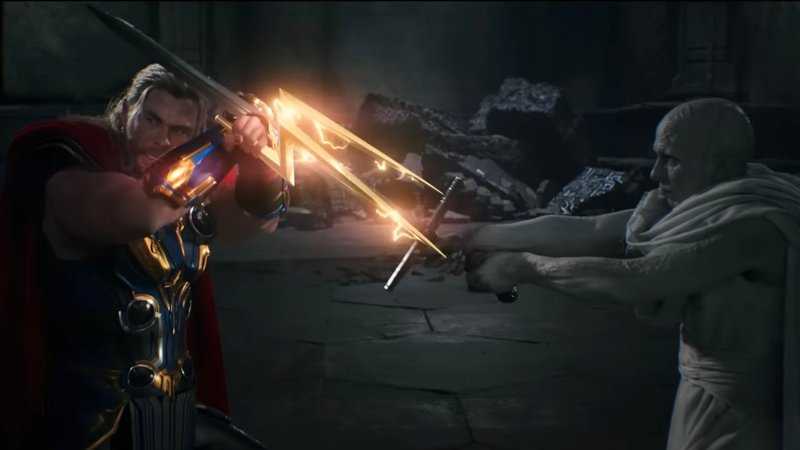 With five days to go, Marvel Studios has shared yet another TV spot for Thor: Love and Thunder and it’s shockingly spoiler-y as it reveals the secret new weapon the God of Thunder will use against Gorr.

Finally it is Thor: Love and Thunder week and as the countdown draws closer to zero, Marvel Studios has released a new action-packed TV spot for the Taika Waititi-directed blockbuster, which teases the epic showdown between Thor (Chris Hemsworth) and Gorr (Christian Bale).

After seeing the movie – review Tuesday! – we now warn you that the TV spot spoils the big new weapon upgrade our beloved God of Thunder receives in the movie – Zeus’ (Russell Crowe) thunderbolt – and how it plays a part in his epic showdown with the God Butcher, but don’t worry too much, as it manages to keep many of the movie’s fun secrets behind, so feel free to watch as you get ready for next weekend!

Watch the latest TV spot below:

#ThorLoveAndThunder must be incredibly special for @Chris Hemsworthfor more reasons than one, but he’s so damn good.

We needed more #Walkyrieshe steals every scene she’s in. #MightyThor is amazing, so much ❤️ in this movie. @TaikaWaititi delivers again. pic.twitter.com/jI7Cm42nVm

I would still say #ThorRagnarok is better (one of my favorite MCU movies ever), but #ThorLoveAndThunder is more emotional and the ending is perfect. pic.twitter.com/BWOyvpaj0c

“Let me tell you the story of the space viking, Thor Odinson…”

The film finds Thor (Chris Hemsworth) on a journey he has never experienced before: a quest for self-discovery. But his retirement is interrupted by a galactic assassin known as Gorr the God Butcher (Christian Bale), who pursues the extermination of the gods. To face the threat, Thor enlists the help of King Valkyrie (Tessa Thompson), Korg (Taika Waititi), and ex-girlfriend Jane Foster (Natalie Portman), who—to Thor’s surprise—inexplicably lose his magical hammer, Mjolnir. , wields like the Mighty. Thor. Together, they embark on a harrowing cosmic adventure to unravel the mystery of the God Butcher’s vengeance and stop him before it’s too late.

Thor: Love and Thunder thunders into theaters on July 8!