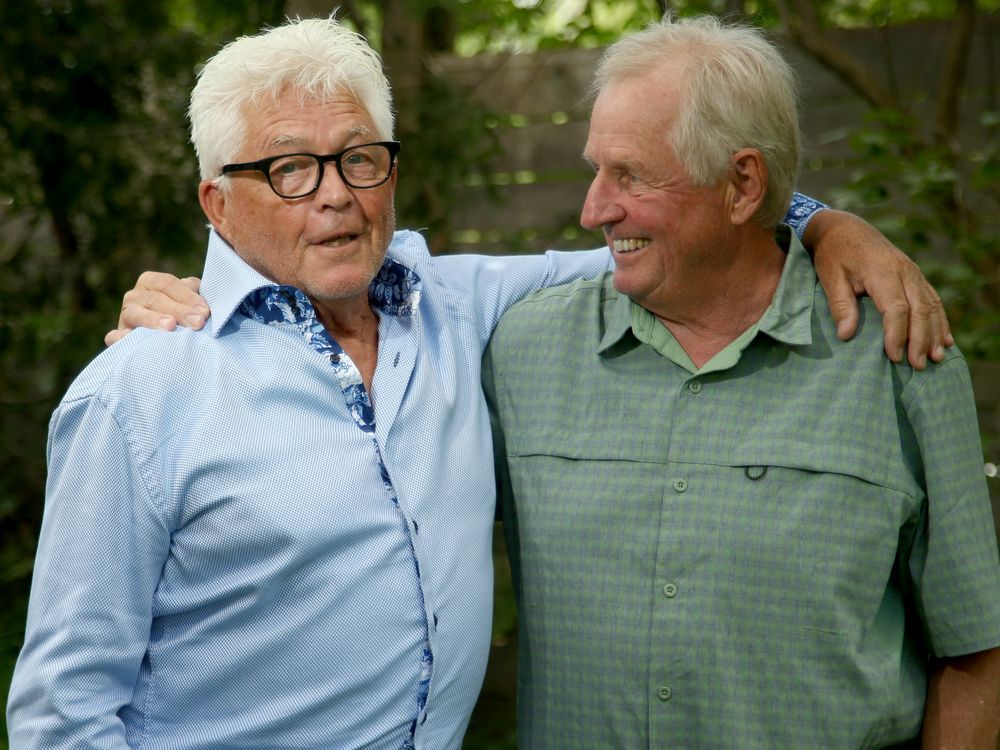 It wasn’t the unusually strong DNA match that convinced Ottawa’s Bob Huson that he’d discovered a half-brother living in England.

It was the picture.

The photo belonged to Malcolm Ives, now 76, who turned up as a “half-uncle” in a genealogy DNA search done by Bob’s son, Geoff, in December 2019. Malcolm, it turned out, was born in Bournemouth, England in January 1946. months after the end of World War II. The seaside town of Bournemouth also happened to be where Bob’s father, George Huson, was stationed during the war with the Royal Canadian Air Force.

Winston Churchill once said that the war effort took “blood, toil, tears and sweat.” George, it seems, did him even better.

“I told Dad, even before I knew the specific relationship, that there was a significant DNA hit with a guy in the UK,” Geoff said.

“Then Geoff said to me, ‘Look at this,'” added Bob, 72. “That photo – Malcolm is the spitting image of my father. It surprised me and I thought, ‘Okay, something’s up here.’”

Last week, the half-brothers first met when Malcolm landed in Ottawa for a visit that was postponed for two years by COVID-19. Since then, Bob has barely taken his eyes off him. Gathered in the backyard of the Husons in Westboro with Geoff and Bob’s wife, Diane, the two men play around like the brothers they are.

“My father was my best friend,” Bob said. “And to see someone 10 years after my father’s death who looks exactly like my father… I was just stunned. I keep saying, “I can’t believe it.” He has the same build as my father, the same arms. They’re both muscular guys.”

George Huson grew up in Ottawa on LeBreton Flats and enlisted in the RCAF during the war. He never spoke much about his wartime experience, but the family believe he was a mechanic and flew Lancaster bombers.

He returned to Ottawa after the war, started a taxi company, worked in computers and eventually had a career in the Department of National Defense. He married Bob’s mother, Jean, in 1948 and the couple had two children, Bob and Debra, who now live in San Francisco.

George died in 2007. Did he know he was leaving a baby in England?

“That’s the big question,” Bob said. “I’m almost 100 percent sure he had no idea, no idea that he had a child. I discussed it with my sister. I said, “Do you think daddy knows?” and she said, “Absolutely not.”

“I don’t think he could live with himself if he knew,” Geoff added.

For Malcolm, the news that he had a half-brother in Canada was less shocking. Malcolm was described by the adoption agency as a “healthy, normal boy with blond hair and blue eyes”. He was adopted as an only child by an English couple, who he says were good and loving parents. And yet he was always curious about his biological mother and father.

“My birthday would come and I would be wondering how my mother is. I would think, ‘I wonder if she’s thinking about me?’ But it wasn’t like that every day or all year.”

Malcolm submitted his DNA for testing about five years ago, not for the purpose of finding his parents, but “to know what part of the planet I came from.”

To his surprise, the results showed that he had other siblings, a half-brother born in 1936 and a half-sister born in 1940, both of different fathers. Malcolm met his half-sister in England, but his other half-brother died in hospital before they had a chance to meet in person. He was not shocked when Geoff Huson contacted him about more relatives in Canada.

Malcolm’s mother, Joan Smith, was 30 when he was born. His adoption record described her as “a superior type of woman who now works as a hotel waitress.” It said she put her baby up for adoption because she had to work to provide for herself and didn’t have a family of her own, something Malcolm now knows from a recent study that wasn’t true.

“She came to see me sometimes. I was too young. I don’t remember. But then she went to London and that was it. She was never heard from again,” he said.

“She didn’t really want any of us. She was alarmed. A confused woman. These things happen. I have no regrets. I don’t blame her. I don’t blame anyone. I went on with my life. I’ve had a good life.”

Since arriving in Canada, Malcolm has spent time at the Husons’ Quebec cottage, visited the city and visited George Huson’s grave at Pinecrest Cemetery on Tuesday. Next week he goes to Calgary and Banff and takes a train ride through the Rocky Mountains. COVID-19 made it too difficult to visit his half-sister in California, so he’s saving that for another trip.

The retired chef said meeting his Canadian family made it a lifelong goal of knowing where he came from.

“It’s the icing on the cake for me,” Malcolm said. “My story is complete.”