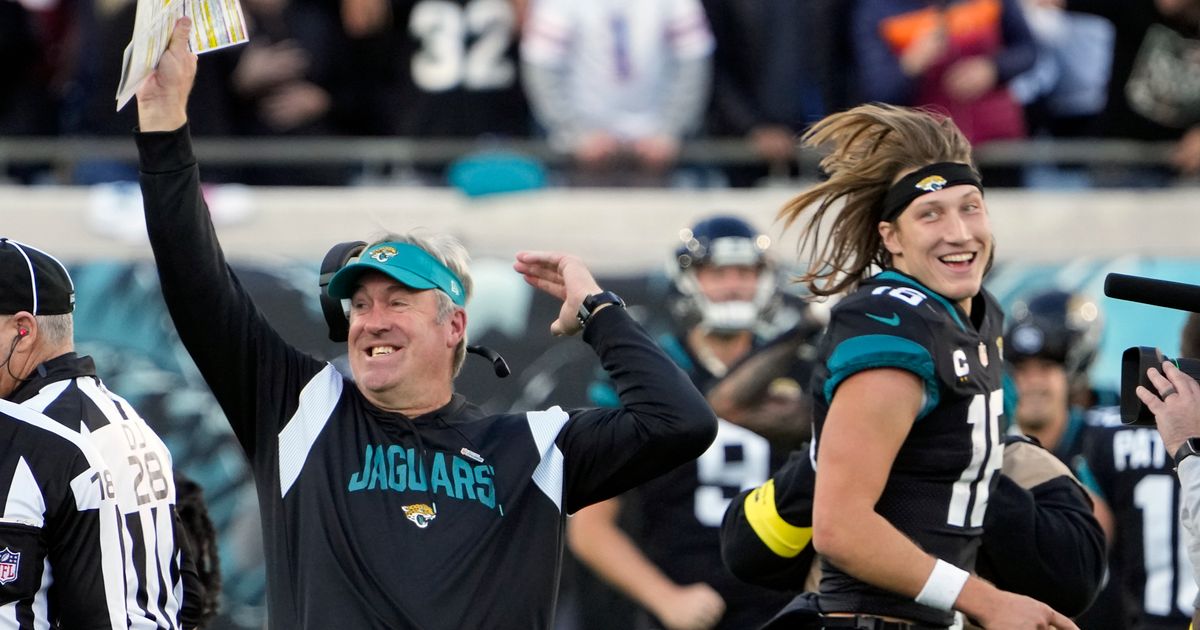 JACKSONVILLE, Fla. (AP) — Trevor Lawrence boarded the eight-hour flight home, grabbed a seat next to teammates, pulled out his tablet and hit play.

He wasted no time painfully reliving every attacking moment of the Jaguars’ 21-17 loss to Denver at London’s Wembley Stadium, an October 30 game that essentially ended with Lawrence’s second interception of the day and his ninth turnover of the season.

Lawrence was frustrated and fed up. The Jaguars’ season was unraveling. They had just lost their fifth straight game by one score, and Lawrence had chances to rally his team in several of them – and failed.

The No. 1 pick in the 2021 draft, a generational quarterback prospect who rarely lost in high school or college, faced another season of adversity. He felt it was time for something different.

“Obviously it wasn’t a good day for me, and I just felt like… I was letting the team down,” Lawrence recalled. “I should have won that game. I never forgot how I felt in that locker room because I never want to feel that way again.

“I will take care of the ball. I just want to be the player I know I can be, and I think that kind of flipped a switch in me.”

He’s been out ever since.

Lawrence has 15 touchdowns – 14 passes, one rushing – and just four turnovers in the six games that followed that loss in London. He completed 70% of his passes for 1,680 yards in a time frame where Jacksonville won four times and chipped 140 yards on the ground.

In brief, he looks just like the guy the Jaguars (6-8) thought they were getting as the New York Jets won two of their last three games in the 2020 season to essentially give Jacksonville the top draft spot.

Lawrence returns to New York for the second time in as many years when the Jets (7-7) host the Jaguars on Thursday night. This one contains AFC playoff implications – and a much more polished and productive version from Lawrence.

“I have a little bit more of a chip on my shoulder now just because of (of) the past year and a half,” he said. “I don’t really forget what was said and what people wrote, and now you see people change their minds after a few weeks, but I remember everything.

“I don’t necessarily use that as my only fuel, but I definitely use that.”

Lawrence has certainly been sharper in recent weeks. He was caught speaking nonsense to Las Vegas linebacker Denzel Perryman in November and waved goodbye to Tennessee fans in the final minutes two weeks ago.

He was in a very different state of mind at the end of October, a winless month that receiver Zay Jones called “creepy.”

“You saw the dejection in him,” said offensive coordinator Press Taylor. “I remember him coming to me and sitting next to me on the plane for a long time. We just had a long talk about where we were.”

Lawrence returned to the facility the next day determined to make changes. He was focused on finding ways to stop dwelling on bad games and bounce back from in-game mistakes. No more repeated errors. No more snowball effects. No more excuses.

“You don’t smile and pretend everything’s okay,” Lawrence said. “It’s not. Everyone is (ticked) and frustrated, not at each other. There’s no pointing the finger, but we all understand and we’ve had that dialogue about what to do. Everyone knows what to do, and we just have to do it.”

They have, and Lawrence’s play has been instrumental in turning the team around. Beating the Cowboys 40-34 on Sunday was perhaps the best testament to Lawrence’s makeover. After throwing an interception in the third quarter that turned Dallas into a 17-point lead, Lawrence responded with three consecutive touchdown drives.

And after he fumbled at the Dallas 38-yard line late in the fourth inning, defensive teammates found him on the sideline and vowed to give him another chance. They did, and Lawrence drove the Jaguars into position for Riley Patterson’s 48-yard field goal that took the game into overtime.

“He found his groove, and this is the Trevor Lawrence we all knew we had,” said linebacker Josh Allen. “It was never, ‘Oh, you have to do better.’ It was never like that, it was all about getting it right.

“He will continue to grow and I think he will get better than the performance he had (Sunday).”