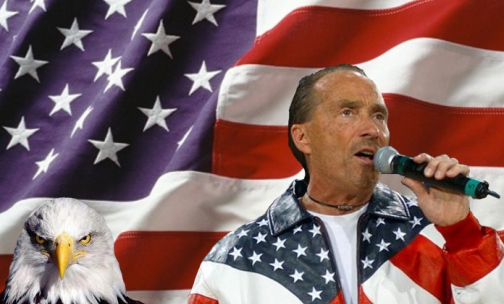 Country music star Lee Greenwood may be best known for his iconic and touching song, “God Bless the USA” – many people can’t hear that song without shedding a tear – but his body of work over his long and successful career has expanded and his care and concern for America goes very, very deep.

He spends a lot of time helping to regularly raise thousands of dollars for charities that help wounded veterans, law enforcement officers and others through Helping A Hero, a Texas-based national organization.

Recently, just prior to July 4, he teamed up with global fireworks manufacturer Black Cat® to introduce a 42-shot “Proud to Be an American” fireworks display available at select locations across the country.

JULY 4 QUIZ: HOW WELL DO YOU KNOW INDEPENDENCE DAY?

Fox News Digital spoke to Greenwood by phone as he began a busy July 4 holiday weekend filled with concerts and special events, including a July 5 performance at the Grand Ole Opry in Nashville, Tennessee.

“As a kid, I grew up on a farm in California — we were tenant farmers,” he told Fox News Digital.

Lee Greenwood spoke to Fox News Digital this weekend, just before July 4. He has over 30 albums to his credit during his long and distinguished career as a country singer and musician.

“We didn’t take much time for vacations. I was generally working, and I’ve been working, on vacation since I was a kid.”

“So it’s not so much about the [4th of July] vacation,” he said, “because it’s about reaffirming our belief that we are so grateful to be in a free country.”

“My message is actually to remember that freedom is not free.”

Greenwood also said, “I think my message is really to remember that freedom isn’t free.”

And every time we enjoy fireworks or other celebrations on the 4th, he added, “we remember it was paid for, in blood, by our military – our army. That’s pretty much my message now.”

Lee Greenwood performs onstage at a Music Memorial to Jeff Carson at Nashville Palace on May 10, 2022 in Nashville, Tennessee.
(Terry Wyatt/Getty Images)

What does he think of the current politicization of so much by so many?

“It is sometimes very difficult to distance yourself from politics,” he said. “Of course politics is in everything and not only” [from] the politicians in Washington, DC, trying to turn the country their way – left or right, center or whatever.”

“Freedom brings discord, but it also brings unity when a crisis comes.”

He described his family’s recent trip to Croatia, as well as his wife, Kim,’s trips to London – and how, when she returned, she shared with him that many of the people she met or spoke to there said they were surprised by reports of the turmoil and disagreement in America at the moment on so many issues.

“And I said to her, Well, that’s what brings freedom. Freedom brings discord — but it also brings unity when a crisis comes,” Greenwood said. “I was visibly and deeply involved in rebuilding America right after 9/11, as you know. And I will continue to do so. I’m trying to break down division and build unity.”

He said he focuses on family and faith – and that they are central to his life in every way.

Greenwood said he is often thanked by people after his concerts or other events.

“I feel humbled by it,” he said, “and I don’t really need a justification for what I’m doing — but I’m glad people recognize that this isn’t superficial to me. This goes deep with me.”

Lee Greenwood takes the time to chat with members of the US Navy during a visit to “Fox and Friends” at the Fox News Channel studios on May 27, 2022 in New York City.
(Roy Rochlin/Getty Images)

He said “it’s pretty cool” to him that people take the time to thank him or share their gratitude or thoughts with him, especially about his iconic song “God Bless the USA”.

“That’s the way God works. You make a plan and then things change. You can’t really plan for what His plan is. I’m going with that axiom.”

Greenwood said “it’s just a simple piece of music that seems to appeal to people. ‘God Bless the USA’ means so much to people when it’s played at the end of fireworks displays” and other events, he said.

Greenwood revealed that “God Bless the USA” was not originally intended as a single.

“I’m a California tenant farmer who was in high cotton most of the time. I had no idea it would ever reach the pinnacle it has. And I wrote that song for an album that was cut in 1983, when I was at MCA. It wasn’t proposed or promised to be a single.”

“I love to sing, I love to be a musician and an artist – and I love to entertain.”

“Only the Universal Company asked for the single from that album [later] — it was my fourth or fifth album with MCA at the time. And I don’t think it would have ever been heard if they hadn’t made that choice.”

“You make a plan and then things change, and that’s because you can’t really plan for what His plan is. I’m going with that axiom.”

MEET THE AMERICAN WHO WROTE ‘THE BATTLE HYMN OF THE REPUBLIC’

What keeps him going?

“I love what I do. I love to sing, I love to be a musician and artist – and I love to entertain.”

Lee Greenwood recently launched his own Patriot Awards — and this weekend his group honors Tony Orlando.

He is also very active with the Houston-based charity Helping A Hero – giving back to wounded and brave American warriors.

“My heart swells with pride for doing this,” he said.

Helping A Hero is “very unique,” he said.

Anyone can go to HelpingAHero.org or LeeGreenwood.com to help America’s “wounded warriors who need and deserve a home,” Greenwood said.

Greenwood has more than 30 albums to his credit.

Lee Greenwood is married to his wife, Kimberly Payne, a former Miss Tennessee. They married in 1992 in Nashville and have two sons, Dalton and Parker.

In 1985, “God Bless The USA” was named Song of the Year by the Country Music Awards.

Maureen Mackey is lifestyle editor-in-chief for Fox News Digital. Story tips can be sent on Twitter at @maurmack.