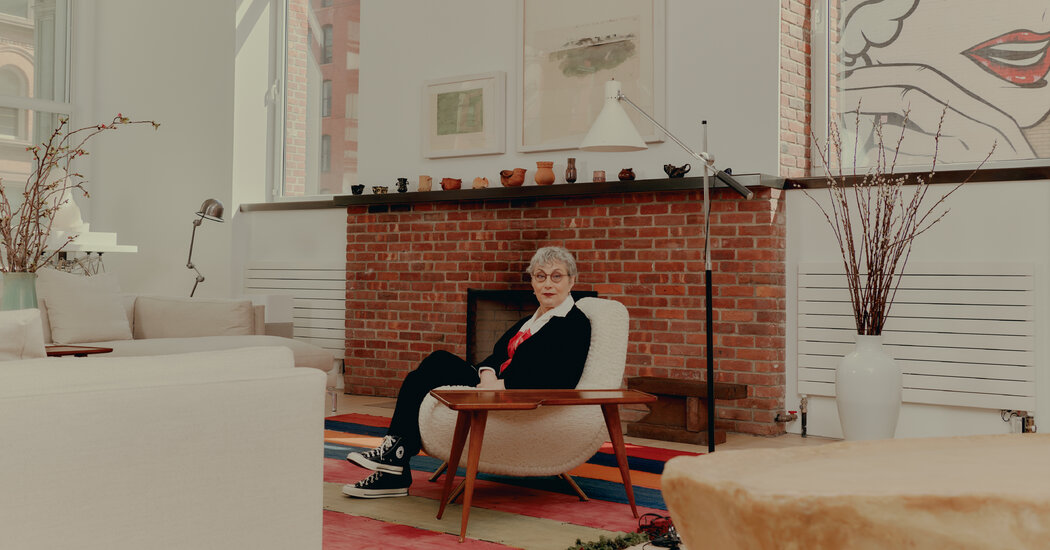 Think of her as Peggy Guggenheim in reverse. Laura Mattioli Rossi: an Italian, not an American, living in New York, not in Venice, near Canal Street, not on the Grand Canal. She founded and runs a private foundation in New York, the Center for Italian Modern Art (CIMA), which recalls the private Peggy Guggenheim collection in Venice.

Since 2013, Mattioli has been exhibiting Italian art from the interwar and post-war period in the SoHo loft building on Broome Street, where she also lives. Guggenheim showed surrealists and abstract expressionists of the same period in the Palazzo Venier dei Leoni, where she lived. The two heirs, raised by nannies some 50 years apart, also had lonely childhoods.

Her father’s extensive collection of Italian futuristic art began in 1949, a birth date just before hers, 1950. “When the collection was born, I was born,” she said last month. “The collection was my big, more successful sister – famous and more beautiful, and more pleasant to my father.”

Over an espresso and chocolates in the large open kitchen in the CIMA gallery above her loft, she casually mentions: “My mother tried to kill me when I was six months old. She was unstable and, after a long postpartum depression, thought I was causing her distress.”

Until she was 12, hired help protected her from her mother’s violent outbursts, while her father, Gianni Mattioli, a successful cotton merchant, traveled on business and escaped emotionally to the sanctuary of his art collection, kept in a second apartment on Via Senato. in Milan. The family apartment was furnished with antiques and historic paintings favored by his bourgeois business guests. His daughter considered the collection her “good sister” filled with “good objects”: “They gave me less trouble than people.”

If Guggenheim, with her winged sunglasses and dangling Calder earrings, was flamboyant, Mattioli dresses quietly, like the academic that she is. She wears glasses with braces, and on a recent visit, her only color accent was a hand-knit scarf tucked under a burgundy cabled cardigan. With a master’s degree in art and a Ph.D. on the history of collecting, she taught for 15 years and still has an inquisitive air. When she married Giovanni Rossi, an art curator, at age 23, she said, “I left with just the shirt on my back — my parents didn’t give me a dime.” (Mattioli and Rossi divorced in 2008.)

In 1983 she unexpectedly inherited the collection, which had been promised to an emerging museum in Brera. But the museum was never built and the Futurists collection, which grew when her father bought another famous collection in 1949, remained in his possession. He died in 1977, and her mother, in a surprising deathbed decision, bequeathed the entire collection to her daughter. Mattioli became the bride of the collection.

The collection had its own biography. Her father had dropped out of high school at age 14 to support his poor mother and work as a delivery boy in a cotton trading company. In the 1920s, through Milanese galleries, he found his own way into an exciting world of avant-garde artists who wanted to change the world. The impoverished enthusiast, so malnourished that he contracted rickets, could afford only a few works of art. It wasn’t until his ascension into the business that things changed, especially when he married the daughter of the boss of a rival cotton trading company. Knowing about his daughter’s instability, the director arranged the marriage: “It was a deal I couldn’t refuse,” Gianni Mattioli wrote to his brother. Angela Maria Boneschi adored her tall, handsome, caring husband.

According to Laura Mattioli, when her family fled the bombing in Milan to Lake Maggiore in 1943, her father witnessed the first Nazi massacre of Jews in Italy, which floated in the lake. Believing that art could make man “less beast”, he decided to collect art for its civilizational value. (After the massacre, she said her father clandestinely arranged safe passage for Jews to Switzerland.) He eventually opened his collection to the public on Via Senato, with his futuristic and metaphysical paintings, and a wall by Giorgio Morandis. In 1949, he lent many works to the Museum of Modern Art’s “Twentieth Century Italian Art” exhibition.

“My father wanted to tell the story of Italian art in the first half of the century,” she said. “For me, he set the example by opening his collection to the public and lending it to museums.”

Due to export restrictions on art over 50 years old and other legal measures, the Italian Futuristic Collection cannot leave Italy as a whole or be broken up for sale. (She is legally allowed to export a limited number of works for exhibitions.) In 1997, Laura Mattioli secured a long-term loan from the Peggy Guggenheim Collection, which allowed her to work as an independent scholar and curator.

“In one fell swoop, the Mattioli collection made the Peggy Guggenheim collection the number one museum of Italian futurism,” said Philip Rylands, then director of the Guggenheim in Venice and now head of the Society of the Four Arts in Palm Beach, Florida. .

Her father’s attitude to art and money helped shape her own. “He had a liberated attitude towards money and consciously used it for spiritual and cultural needs and the common good,” she said. “His social empathy grew out of the stabbing poverty of his childhood.” As part of its cultural outreach, CIMA funds scientists, primarily foreign, for research residency in New York.

For Mattioli, CIMA is a correction. Italian modernism has always been viewed through a French lens, and her New York shows shed that perspective to better establish avant-garde Italian art as an independent rather than a derivative movement. The first was Fortunato Depero, the futuristic artist who had become a father figure to her father, followed by a show about Medardo Rosso, the sculptor and photographer.

“I am full of admiration for her campaign to raise the profile of 20th-century Italian art and emphasize its originality, and to do so with such rigorous scholarship,” Rylands said, adding : “The Depero and Rosso exhibitions drew attention to artists who are generally not sufficiently understood.”

In SoHo, as in Milan, there are two apartments, its own and the high, open, minimalist loft gallery. On Friday and Saturday, visiting days for the public, guests are welcomed with an espresso, as in a house; scholars guide visitors on Friday tours.

Today’s show of social realism, “Staging Injustice: Italian Art 1880-1917,” embodies her father’s idea of ​​art with a social message. The face of “La Portinaia” (“The Concierge”), a sculpture by Rosso, a contemporary of Rodin, expresses the fear of prolonged poverty. In “Il Minatore” (“The Miner”), Ambrogio Alciati painted a Caravaggio-esque Deposition from the Cross, where a miner’s body is mourned by a widow after an accident in the mine. He reinvents chiaroscuro with firm, wispy, contemporary brushstrokes. A haunting, tightly focused portrait, “Venditore di Cerini” (“Match Seller”) by Antonio Mancini, depicts a mendicant monk peddling matches, with streaks of paint that John Singer Sargent would have applied to silk, here with the effect of wistful sadness.

In her own loft downstairs, Mattioli collects the art of her time, as does her father (and Peggy Guggenheim). Perfect visual pitch and boldness seem to be the legacy she took in at home. Two surprising sculptures by New York sculptor Barry X Ball are three meters high, one a ghostly distortion of Michelangelo’s Rondanini Pietà, carved in translucent onyx. Above the gas-fired fireplace hang two faint and fragile pencil and watercolor drawings by Cy Twombly on torn paper. Six early Morandis – from what Mattioli calls his ‘pudding’ period because of the thickly applied oils – line a wall.

The furniture is Italian modern. Two Gio Ponti side tables stand next to the low-slung, mid-century Lady Armchair, in rugged upholstery, by Marco Zanuso for Cassina. An inlaid Lombard-style desk and dresser from the family’s Milan apartment line the hall.

In addition to her taste and sense of social mission, the legacy she brought with her from her father’s collection was aloofness. Since it was located outside her home, she got the sense that the collection was something “I could live with, but also without.” In 2018, she donated the entire futuristic collection to her youngest son, Jacopo Rossi, a Roman Catholic priest. She donated the collection in Switzerland to her other son, Giovannibattista Rossi, an alpinist who lives there.

“I don’t know what the future of the Futurist collection could be,” she said. “But my son has more energy and he will run it for the third generation.”

Last year, under the auspices of the Italian Ministry of Foreign Affairs, the futuristic collection was sent in a diplomatic pouch for exhibition to the State Russian Museum in St. Petersburg and the Pushkin Museum in Moscow. The movement had had a major impact on the Russian avant-garde in the early 20th century. The collection returned to Italy just 10 days before the recent start of the war in Ukraine.

If it had still been in Russia after the launch, “We don’t know what would have happened to the collection,” she said. It now goes to Milan on loan for five years to the Museo del Novecento (Museum of the Twentieth Century), next to the cathedral.