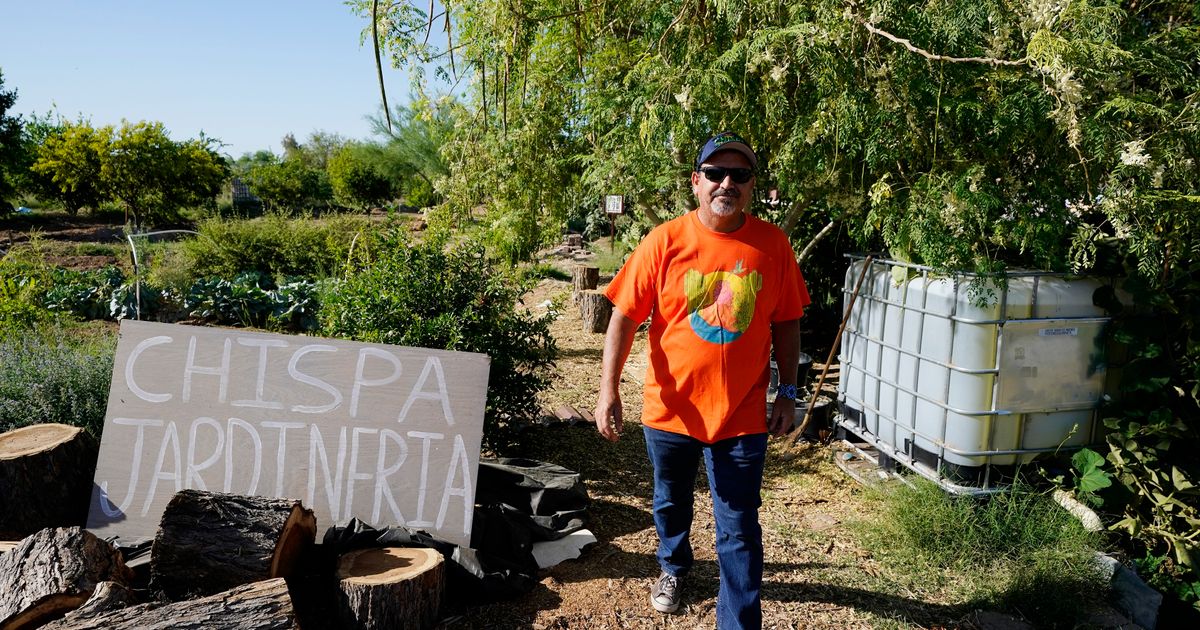 PHOENIX (AP) — Students at a largely Hispanic elementary school in Phoenix have long queued for morning classes on a dusty patch of ground under a blazing sun.

So when Tony Mada learned of plans to plant 75 young trees at Borman Elementary School, the 30-year-old and his daughter Lilyth, 10, joined dozens of volunteers to increase shade on campus.

Desert willows, oaks and mesquites as high as three feet were among the trees planted during the event hosted by local non-profit organization Trees Matter and environmental organization The Nature Conservancy, which is expanding its focus beyond the wilderness to urban areas affected by climate-driven heat.

“I’ll do everything I can to cool off my kids in this hot neighborhood,” Mada said one Saturday this spring as he and Lilyth, a student at the school, freed an acacia tree from the wooden box holding its roots.

After experiencing the effects of global warming firsthand, American Latinos are at the forefront of climate change activism, often based on traditions from their ancestral homelands.

“There has been a real national uprising in Latino environmental activism in recent years,” said Juan Roberto Madrid, an environmental science and public health specialist in Colorado for the national nonprofit organization GreenLatinos. “Climate change may impact everyone, but it impacts Latinos more.”

American Latinos often live in neglected, lower-income neighborhoods that are degrees hotter than nearby areas because they have a higher population density and limited tree canopy. Hispanics are also disproportionately affected by chronic health conditions exacerbated by extreme heat, such as diabetes and heart and kidney disease.

Latino activists are now sounding the alarm about the risks of global warming to their neighborhoods and the world. Among them are a teenager who protested every Friday for weeks outside UN headquarters in New York, an academic in Southern California who wants to integrate more grassroots efforts into the global climate organization, and a Mexican-born advocate in Phoenix who teaches young Hispanics how important it is to protect the earth for the future. generations.

“Many members of the Latinx community have indigenous roots,” said Masavi Perea, organizer of Chispa Arizona, a League of Conservation Voters program. “Many of us grew up on farms, so many of us already have a relationship with nature.”

As he walked through rows of kale, corn and pumpkin on Chispa’s lot in a garden in south Phoenix, the 47-year-old said he is working to increase the group’s base and educate young members about environmental issues such as climate change. .

Recent research shows that most Latinos in the US view climate change as a major concern.

A Pew Research Center survey published last fall found that about seven in 10 Latinos say climate change affects at least some of their communities, while only 54% of non-Latinos said it affects their neighborhood. . The self-administered web survey of 13,749 respondents had a margin of error of plus or minus 1.4 percentage points.

Latino and other communities of color are being disproportionately affected by climate change, such as more frequent, intense and extended heatwaves in Phoenix, Las Vegas, Palm Springs and other arid western communities.

A study by researchers at the University of California, Davis and the American University of Beirut last year concluded that poor and Latino neighborhoods in 20 metro regions around the Southwest are several degrees higher on the hottest days, raising the risk of heat-related illness. †

Phoenix, the hottest major city in the US, has had some of the hottest summers in recent years, with a heat wave a year ago pushing the temperature to 118 degrees (48 degrees Celsius).

Earlier this year, the city partnered with the nonprofit American Forests to create the first of 100 “cool corridors” by planting shade trees for pedestrians and bicyclists next to a south Phoenix park named after the late Latino activist Cesar. chavez.

Gallego, who was born in Chicago and raised there by his Colombian mother, said segregation in Phoenix once forced blacks and Latino residents to live in the south of the city, which meant fewer trees and other investment there.

He has collaborated with fellow Democrat U.S. Representative Bonnie Watson Coleman, of New Jersey, on a bill to create $30 million annually in federal subsidies over several years to alleviate the effects of urban heat, especially in low-income communities of color.

While many Latino activists focus their climate advocacy on their own neighborhoods, teenage Alexandria Villaseñor is bringing activism to the global stage.

Climate policy scientist Michael Méndez, author of the book Climate Change from the Streets, said organizing at the grassroots is equally important.

“It’s not an abstract idea to us,” said Méndez, a lecturer at the University of California, Irvine. “For Latinos, climate change is about how we can protect our families, our children.”