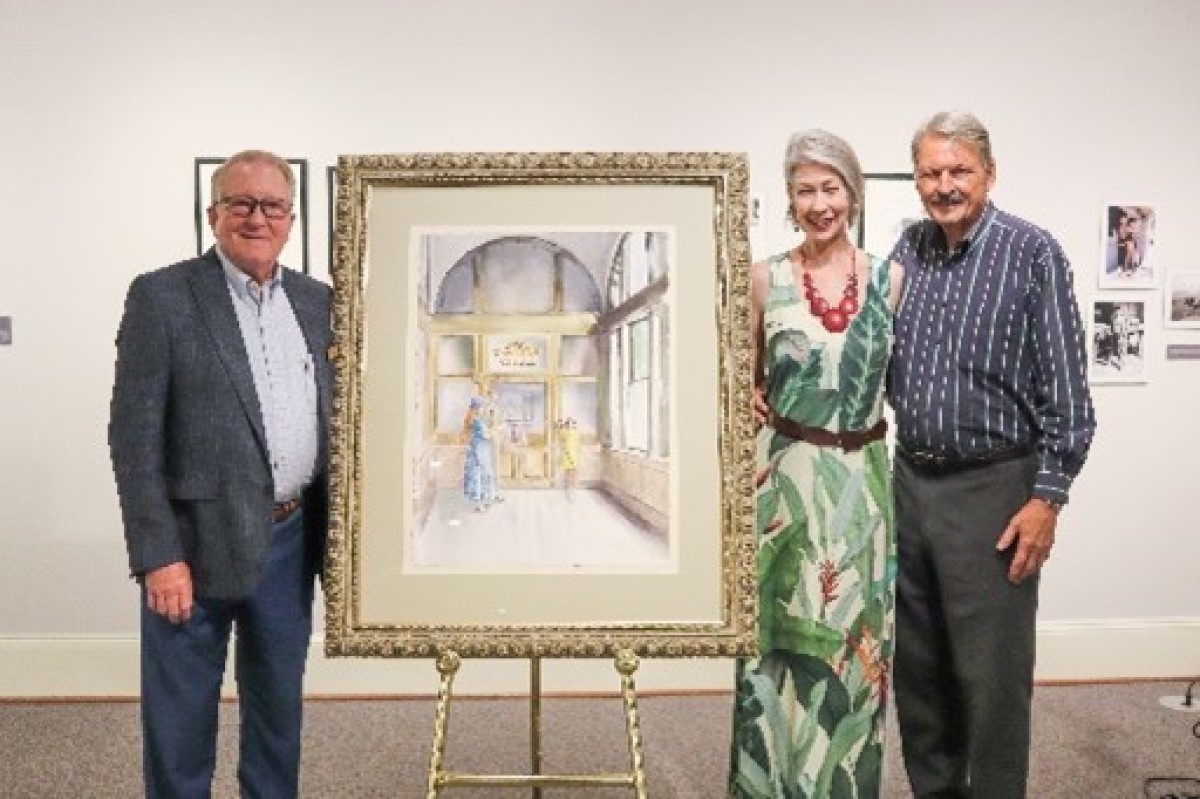 CLARKSVILLE, TN – Each year for Flying High, the Customs House Museum & Cultural Center’s largest fundraising gala, a local artist is commissioned to be the “Signature Artist” to produce a unique and original piece of art that will highlight of the event’s live auction.

This year, recently returned Clarksvillian Kitty Harvill has created an emotionally charged watercolor that makes a lasting impression, while also paying tribute to her mother’s legacy with the museum. Peg Harvill was the Flying High Signature Artist a dozen times, including during the first ten years of the gala. Now Kitty will share the Signature Artist title with her mother.

On June 23, Kitty and the museum’s executive director, Frank Lott, unveiled Peg’s Pony for the first time in front of Flying High sponsors, museum members, other contributing artists and enthusiastic enthusiasts. The painting depicts the Clarksville U.S. Post Office and Customs Office Postmaster’s Office, built in 1898. Kitty’s painting is inspired by a black-and-white photograph from the museum’s pictorial archives.

She selected local people as models, along with a 1938 photo of her mother as a child, to recreate a scene of a family visiting the Postmaster in the late 1930s – the final years of the building’s service as a post office and customs office. “I don’t know of any other paintings of the building’s interior from this period, and my goal is to mark a historic moment in Clarksville’s rich history,” explains Kitty.

Kitty started out as an oil painting, but after attending a class at Austin Peay State University taught by Professor Max Hochstetler, Kitty fell in love with another medium: watercolor. She later moved to Brazil with her husband Christoph, and after two years photographing nature and wildlife, Kitty’s artworks blossomed with those subjects, as did her personal dedication to conservation. With her husband, she founded Artists & Biologists Unite for Nature (ABUN), a group for artists to create artworks in collaboration with biologists and organizations around the world committed to preserving endangered species and ecosystems, including to date 40 projects completed on each continent. Earlier this month, Kitty was recognized for her artistic contributions to nature and wildlife with the highest award from Artists for Conservation (AFCs) worldwide: the Simon Combes Conservation Artist Award. This award has become the world’s most prestigious conservation award for visual artists.

“Kitty is a dear friend of this museum and she truly captured not only the essence of life in our building long before we became a museum, but also the legacy of her mother’s relationship with this institution,” says Lott. “We know that whoever wins the bid on this masterpiece will be honored to own this important local treasure.” Flying High attendees will have the chance to bid on this exceptional piece of art as the last item up for sale in the gala’s live auction.

Tickets are still available to attend the James Bond inspired event ‘Live and Let Fly’. The event is on Saturday, July 16, starting at 5:00 PM at Oak Grove Racing, Gaming & Hotel. The Museum Guild organizes a glamorous evening of cocktails, dinner, silent and live auction and dance for their biggest fundraising evening of the year. Support the museum’s mission by purchasing tickets and bidding on high-profile auction items donated by many Clarksville businesses, local artists, and more. Tickets are available on the museum’s website or at Seasons: The Museum Store.