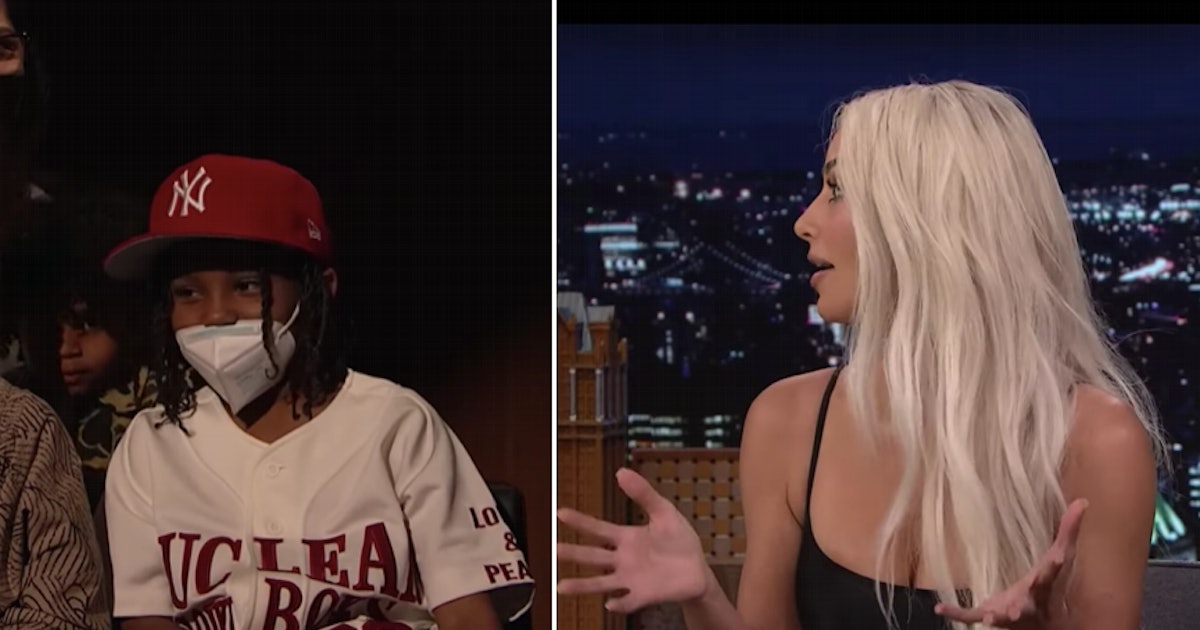 Kim Kardashian took her two sons to work this week, and things didn’t go as smoothly as she probably would have liked. The mother of four was interviewed on The Tonight Show by host Jimmy Fallon when she suddenly had to bring in her kids on television. Sometimes it’s hard to relate to the Kardashians and their ultra-fabulous lifestyle, but as a mom I can tell you… this isn’t one of those times.

The Skims mogul was only minutes into her interview when she told Fallon she never watched Saturday Night Live before she was a host and had no idea he had been a cast member, when the host interrupted her. Fallon looked over Kardashian’s shoulder and said, “Uh, I hear kids.” Apparently, it was her two sons, 6-year-old Saint and 3-year-old Psalm, whom she shares with ex-husband Kanye West.

Kardashian immediately threw her head around and said, “Guys, can you guys stop? This is your first time working with me!” Fallon went on to say hello to Saint, who essentially gave a big eye roll as little brother Psalm crawled over his caretaker. “My two boys are here and I hear them making so much noise. Guys, this is the first time you’ve been with me.” works. Don’t mess this up. Come on!”

Trying to continue her interview, Kardashian told an adorable story about 9-year-old daughter North’s talent as a special effects makeup artist, when she turned around again and said, “Guys, seriously? You must go.” Psalm was carried away by his attendant while Saint stayed with his friend.

To be fair to the two boys, they gave their mother an idea of ​​how they would behave beforehand. Kardashian invited the two to join her in an Instagram Live video and they were eager to get going.

“Hey fools!” Saint screamed and added, “If you’re watching this, I hate you!” Little Psalm seemed to copy him when their mother said, “Hey, stop it!” She further admonished Saint by saying, “Look what you’re teaching him,” as he seemed to shrink back, hugging his brother, and saying, “This is a good boy.”

As a mother of four, the reality is that Kardashian is always dealing with a lot of personalities. Like eldest daughter North, who apparently makes family Christmas photos ‘unusable’ by sticking the middle finger at the camera. Let’s also not forget that North went live on TikTok without her mother’s permission, giving millions of people an unauthorized tour of the family home. I think it’s time for Saint and Psalm to step on the board.