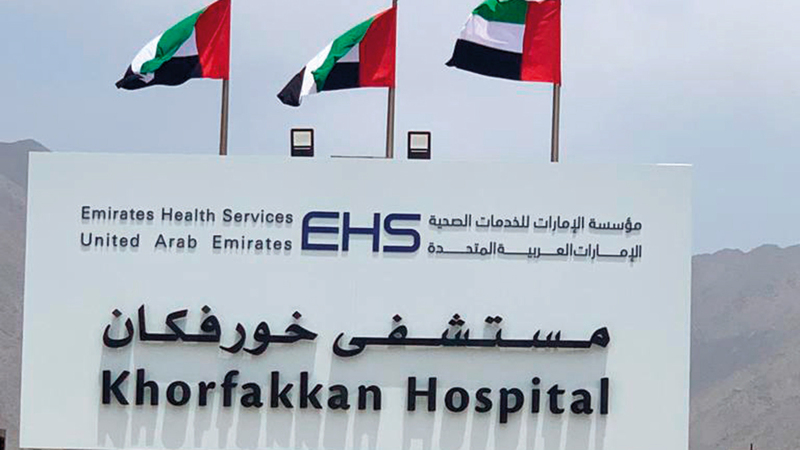 The director of Khorfakkan City Hospital affiliated with the Emirate of Sharjah, Obaid bin Frisch Al Kindi, unveiled the development of a new work system to provide a multidisciplinary treatment package, in partnership with the Emirates Foundation for Health Services and the Ministry of Health and Community Protection.

He highlighted the addition of new medical units at the hospital, represented by a heart disease unit and a diabetes center, with the aim of enabling the hospital to provide the best diagnostic and treatment services to patients in the city.

He also emphasized the willingness of Khorfakkan Hospital to ensure high-efficiency medical services reach the citizens and residents of the East Coast, especially the people of Khorfakkan City, while providing specialized services to ensure that patients are not be transferred to hospitals. from them, noting that the Khorfakkan Hospital has entered a new phase due to extensive maintenance and its support.With new medical devices and equipment, specialists and consultants, in addition to carrying out expansion operations, at the cost of 100 million dirhams.

He pointed to the separation of the intensive care unit from other departments, the creation of an integrated center for diabetes patients, which will mean a qualitative leap, the expansion of operating rooms and the addition of four advanced rooms.

He also confirmed the introduction of a new system of work in the Department of Care, Internal Medicine, Anesthesia, Pharmacy, Nutrition, Physiotherapy, Stroke Diagnostic Services and Primary Treatment, by appointing new consultants and specialists in the hospital in specialties such as a neurosurgeon, a psychiatrist, respiratory, intensive care, urology and ophthalmologist, in addition to appointing a technician.

He emphasized that the hospital has plans to develop emergency care and men’s surgery and to develop an integrated kitchen.

Bin Frisch stated that the results of the wards in the first half of this year made a qualitative leap compared to the results of previous years, mainly due to the development of new medical units, as the number of patients treated in intensive care units 154 cases and medical teams treated 2,569 patients. The two were hospitalized and 22,418 patients received medical care in the emergency department, while the number of outpatients reached 21,340 patients.