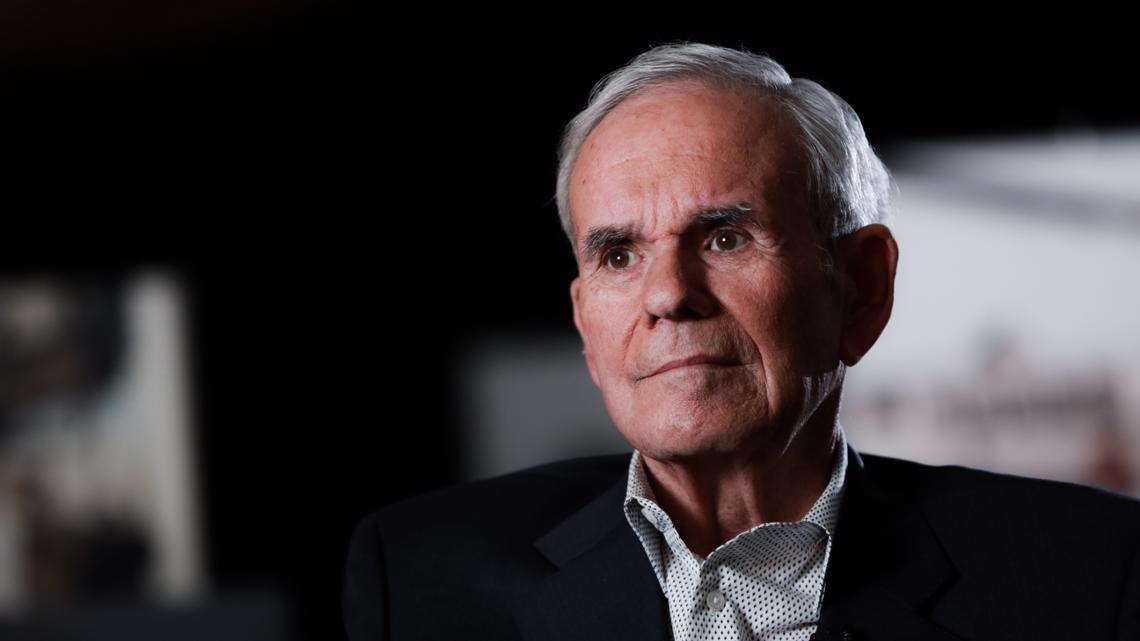 Dana anchored evenings at 12 News for 25 years and was a Valley institution.

PHOENIX – Kent Dana, the face of the evening news in the Valley for three decades, passed away on Tuesday afternoon.

Dana suffered complications from hip surgery in January and died — surrounded by his family.

The local TV news icon leaves behind his 42-year-old wife Janet, their two children and four children from his first marriage. He had 13 grandchildren.

A 1954 Arizona Republic newspaper clipping includes a review of the Phoenix Little Theater’s rendition of the play “Happy Time.”

“Young Kent Dana stole the show,” the article reads. “After the initial awkward moments, his role as a veteran took on a warm heart and delivered a rock-solid performance. In his hands, the questions and desires of a twelve-year-old boy seem perfectly natural. He has a very sweet character.”

That 12-year-old boy would go on to become the most recognizable face in Phoenix television news history.

Throughout his career, Dana covered Phoenix airwaves from the Oklahoma City terror explosion site, the Los Angeles riots, and Barry Goldwater’s living room. But he will probably be best known as a fixture at the anchor desk in an era when local television news dominated the ratings.

Kent grew up the third of seven children in a modest home near Central Avenue and Thomas Road, now the site of the historic Willo District.

During the 1940s and 1950s, Phoenix was still developing an identity. And Kent too.

As a youth, he sold door-to-door donuts, was a paperboy for the Republic of Arizona, and spent summers as a construction worker in homes in the Arcadia neighborhood and Christown Mall.

When he was 5 years old, Kent won the “Mr. Little Arizona Pageant” at the historic Orpheum Theater.

At around 10 years old, he found his place as an actor at the Phoenix Little Theater in downtown Phoenix, now called the Phoenix Theater Company.

Kent starred in “The Remarkable Mr. PennyPacker” and was named “Best Child Actor” that year.

Growing up in Phoenix

Kent was not exactly athletic and always told the story of the year he tried to play baseball.

“One game I finally got a hit. I was so ecstatic that I promptly ran to third base,” Kent said whenever he retells the story.

As an elementary school student, he recalled walking to school with his siblings through a dairy field that now houses the Park Central shopping mall.

“In the summers, we rode our bikes everywhere, up and down Central Avenue, all day long,” said Kent’s younger brother, Reed.

At age 14, Kent took his father’s car for a fun ride and crashed with it.

‘That was Kent. He was just a little more willing to gamble in life,” Reed said.

As an adult, Kent often told the story as a lesson in parenting.

“I waited at home, expecting to get big trouble from my father,” Kent said. ‘But he sat me down quietly and asked me, ‘Have you learned your lesson?’ I said yes. That was all that needed to be said.”

Later, Kent’s father bought a ’36 Plymouth for $75 dollars. Over the weekends, Kent and his friends took part in a decades-long rite of passage for teenagers from the Phoenix area: cruising Central Avenue and hanging out at Bob’s Big Boy.

“Kent had so many friends that he would take home. Everyone liked him. For me, I was so proud that my brother went to my own high school,” Reed said.

College and a career in broadcasting

After graduating from West High School in 1960, Kent attended ASU for a year and went on a two-year mission to Uruguay for the Church of Jesus Christ of Latter-day Saints. After returning home, he eventually transferred to Brigham Young University, where he studied broadcast journalism and worked at a Provo radio station.

Kent’s father, Joe Dana, laid the foundation for Kent’s interest in broadcasting. He was a butane dealer and radio host for KOY Radio. He launched a weekly variety show on Channel 5, ‘Arizona Caravan’, where he delivered news bulletins, sang songs and hosted musical guests.

“When he started his variety show on Channel 5 we had no money so our family had to go out and buy a TV so we could watch Dad on Wednesday nights,” Kent told an audience in 2018.

After college, Kent worked as a gas station manager, radio host, and weekend anchor for KOOL-TV. His big break came in 1979 when he joined 12 News as the male evening anchor. He began an impressive streak of evening news anchoring from 1979 to 2004. In 2005, he anchored for CBS 5 for another five years before retiring.

Kent’s son, Joe Dana, followed in his footsteps in broadcast journalism and spent 20 years working for 12 News as a presenter and reporter.

“He always felt that local TV news provided a connection to the community that was unlike anything else,” said Joe Dana. “And I think the fact that he was doing this work in the community where he grew up made it that much more meaningful to him.”

Kent also believed that local TV news was vital to creating a sense of community.

“I want to tell you this to the younger generation of the broadcasting community. We all know TV newsrooms are changing,” he told an audience in 2018. “Despite the changes, some things have never or never changed. The ability to find a good story and tell a good story. And that hasn’t changed at all.”

Reminiscent of Kent Dana, the face of Valley news for three decades 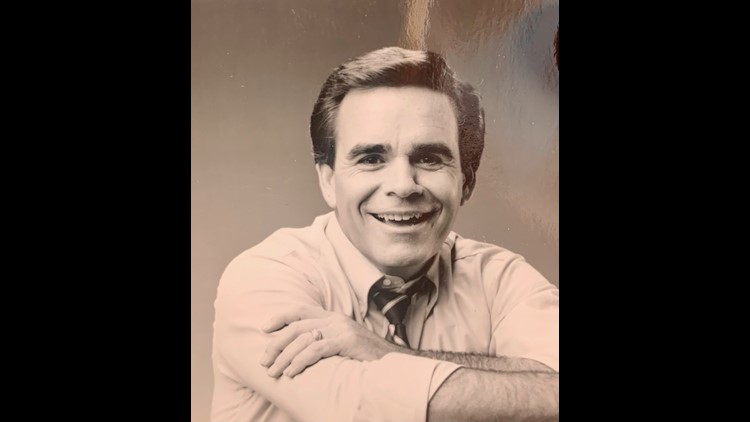 It was never about awards

Throughout his career, Dana won several Emmy awards, was inducted into the Arizona Broadcasters Hall of Fame, and received the Rocky Mountain Emmy Governor’s Award in 2018. He was quick to commend the producers and photographers who work with him. At a 2018 Emmy Awards speech, he credited his success to his co-anchors and longtime producer, Julie Frisoni Shumway.

“She kept my life in order,” Kent said at the time.

Shumway credits Kent for identifying her talent while an intern at 12 News and getting management to hire her after college.

“I think of Kent as a second father,” said Shumway, whose father died while she was in high school.

“I think a lot of people see Kent as a figure bigger than life. But when you knew Kent Dana, he was the absolute opposite of that. He was hilarious, he was hot and would give you the shirt off his back,” Shumway said.

Shumway and Dana worked together for a number of years to create the two signature projects Kent was most proud of in his career: Wednesday’s Child and Silent Witness.

The Wednesday’s Child series was a collaboration with Aid to Adoption of Special Kids (AASK). Kent profiled children in the foster system, and the stories drew attention to adoption efforts in general. The stories brought out Kent’s inner child, as he joked and laughed with children. They also helped viewers see the humanity of foster children.

“Hundreds or even thousands of children have found permanent homes thanks to Kent Dana,” said Shumway. “AASK would tell us they would get hundreds of calls after a story aired and it might not work for that kid, but it would develop a relationship for parents to adopt someone else.”

He loved to laugh

Anyone who knew Kent remembers his loud, cackling laugh that could light up the newsroom.

“He was the best audience in the world. I could joke about anything and Kent thought it was hysterical. And I’m not that funny,” said Jineane L’Ecuyer, who worked with Kent from 1986 to 1999.

Kent’s motto was, “Take your job seriously, but don’t take yourself too seriously.” That ideal was reflected in his annual Christmas tradition of wearing a bright red checked jacket in the sky. He bought the jacket from Sears in 1979 and over the years it quickly went out of style. But wearing the jacket became a tradition viewers looked forward to every holiday season.

“It got to the point where viewers called us and asked, ‘When is he going to wear the jacket?'” Kent said.

Kent’s easy-going, resilient demeanor set the tone at home too.

“When he was dealing with the six of us, if we ever let him down or did anything to stress him, he was always calm, cool and collected,” said Susan Allen, one of Kent’s daughters.

Despite his public personality, Kent was his children’s biggest fan. He often slipped out of the newsroom between evening news broadcasts to catch his kids playing ball games, dance performances, and school shows, even if he could only stay for a few minutes. Standing up for them and ensuring their well-being was his priority. It’s a belief he says he learned from his father.

“My father once turned down a very lucrative contract to move to Los Angeles because he didn’t think it was the best environment. We always came first in his life and that made a difference,” he said.

Kent also acknowledged his wife Janet’s sacrifice for being married for three decades to someone with such a unique job.

“It’s not easy being the husband of an evening anchor and leaving the house at 1pm every day and being gone all night,” Kent said in 2018. “She was in charge of the household and kept the family is in line and I am very, very proud of her.”

So it is fitting that she should have the last word.

“Kent remained humble despite being put on a pedestal by so many,” she said. “His infectious smile, his ability to put everyone he met at ease and his genuine interest in others made him special and irresistible.”

Keep up to date with the latest news and stories on the 12 News YouTube channel. Register today.