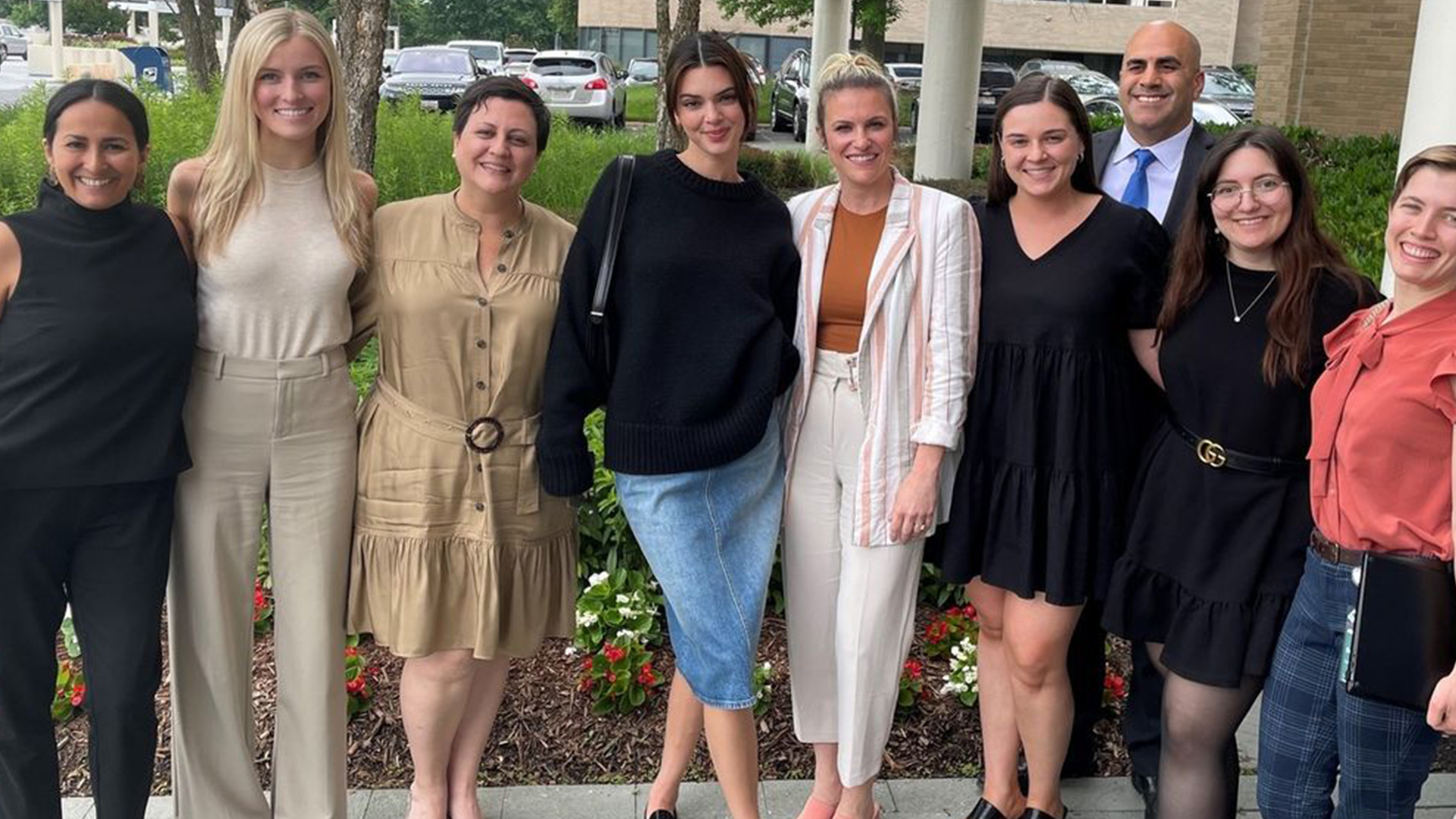 KENDALL Jenner dropped the makeup this week at a business meeting to promote her 818 tequila.

The reality star dropped it when she stopped by Total Wine & More’s headquarters to celebrate the stores now stocking her.

Kendall, 26, posed with employees outside the company’s headquarters.

She looked absolutely pedestrian in her pose, wearing a black sweater and blue denim skirt.

She completed the look with simple black shoes – no socks – and a black bag strung over her shoulder.

The model blended in easily with the other employees as she stood in the center of the group for photos.

On the Total Wine & More Instagram page, the company shared some snaps from its visit.

They added the caption: “Benefits of the job – you meet some great partners!

⁠”Our team was more than lucky to have a surprise visit from @KendallJenner and the @drink818 team at our headquarters recently.”

Kendall and executives spent some time talking about the store and reviewing the rollout of 818 in stores.

The business meeting comes as fans continue to speculate about the status of Kendall’s relationship with Devin Booker.

The former couple reportedly recently split up after dating for two years, but earlier this week they were seen laughing together and appeared to be reuniting.

There didn’t seem to be any bad blood between the exes as photos captured Kendall and Devin, 25, in good spirits at Soho House in Malibu on Sunday.

The Hulu personality and NBA star seemed to give each other some flirty looks in the photos, each beaming from ear to ear during their conversation.

But it could have all just been smoke and mirrors, as a source told PageSix that the photos taken of the couple were set up in a way that fans wouldn’t think he dumped her.

“Her team doesn’t want it to look like she’s been dumped. Her people requested the meeting,” the insider told the publication.

A source told ET on June 22 that Kendall and Devin had split up after two years together.

“Kendall feels like they’re on different paths,” the insider said.

Another source told the outlet that the two “have had discussions about their future but are not on the same page”.

The insider shared that there is potential for the couple to get back together.

The lovebirds were first romantically linked in 2020 and went public with their relationship on Valentine’s Day 2021.

However, her followers saw multiple leads on social media showing that the duo had supposedly split up before the news.

Fans noted that Devin allegedly deleted a photo he had of the model from New Year’s Eve.

Another claimed that the Phoenix Suns star did not like tweets about the KUWTK alum and that his brother, Davon Wade, had reportedly unfollowed her on Instagram.

Fans also thought the duo broke up when Kendall posted a photo to her Instagram of her fancy dinner earlier this month – with another man.

She sat at a table and drank with her longtime boyfriend and model Fai Khadra, sparking dating rumors between the two.