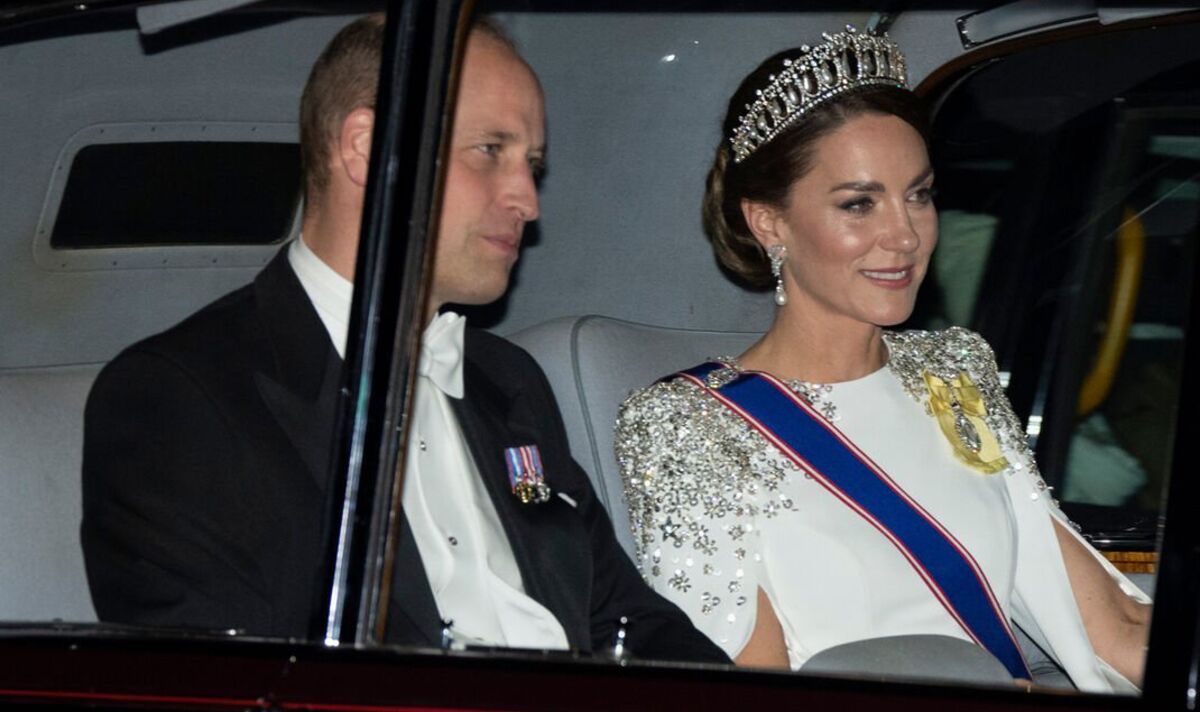 The Princess of Wales dress is Jenny Packham’s Elspeth dress and is currently available online for £4,303.09. It has a boat neckline and long open sleeves, with beaded detail over the shoulders. It is fitted and made of a stretch cape. The back has a keyhole and is from the designer’s bridal collection.

As with previous dresses, Kate had this white Jenny Packham dress altered; the keyhole at the back was closed for a more understated look.

For jewelry, the princess chose the Queen Mary’s Lover’s Knot Tiara, often shortened to Lover’s Knot. Tonight marks Kate’s ninth time wearing it, cementing her position as her “favourite” – or at least most frequently worn tiara.

The tiara was commissioned by Queen Mary in 1913 by the British House of Garrard. It consists of diamonds and a collection of 19 hanging pearls, all set in silver and gold. It was later handed over to Queen Elizabeth, who then gave it to her daughter-in-law, Princess Diana.

Thanks to Diana, Lover’s Knot became one of the most recognizable pieces of jewelery of the British royal family. Reportedly, the piece was so heavy that she developed a headache after wearing it.

After her divorce from Prince Charles, the tiara was returned to Queen Elizabeth.

Kate did not wear the tiara for the first few years of her royal tenure. She first wore it to the diplomatic reception in December 2015 and it has since become the princess’s favorite formal headwear.

NOT MISSING…
Cheapest method of cooking without an oven – ‘save 64%’ on energy [EXPERT]
Toblerone hot chocolate recipe – £3.75 cheaper than Costa Coffee [GUIDE]
Best haircut and color women 40+ should have – ‘hides wrinkles’ [COMMENT]

The Art Deco Diamond Set Brooch is considered a new piece of jewelry in Kate’s collection.

The Art Deco diamond brooch has a rectangular shape and, according to the brand, has an estimated weight of 4.5 carats.

The description of the brooch reads: “A sparkling Art Deco brooch. This brooch features a classic Art Deco design, with geometric shapes and fine openwork platinum, set with vibrant diamonds all over.

The earrings Kate chose for tonight’s outfit are Princess Diana’s South Sea Pearl Earrings, which first appeared in November 1990 when the late Princess attended the coronation banquet of Emperor Akihito and Empress Michiko of Japan.

Princess Diana last wore them in June 1997 when she attended a Swan Lake performance at London’s Royal Albert Hall – her last official engagement.

Someone with the username @austy_spumante wrote: “I really gasped. I know people are tired of that tiara, but it really goes with this outfit. What a statement as Princess of Wales!”

Sonyakayani commented, “Definitely one of her best looks.” Jen_m_24 reviewed: “I love it – she looked amazing. Elegant but with a touch of sparkle. She seems to lean on pearls as her signature jewel, which is a nice line of continuity between the Queen, Diana, and her. Would still like her in the queen rubies.