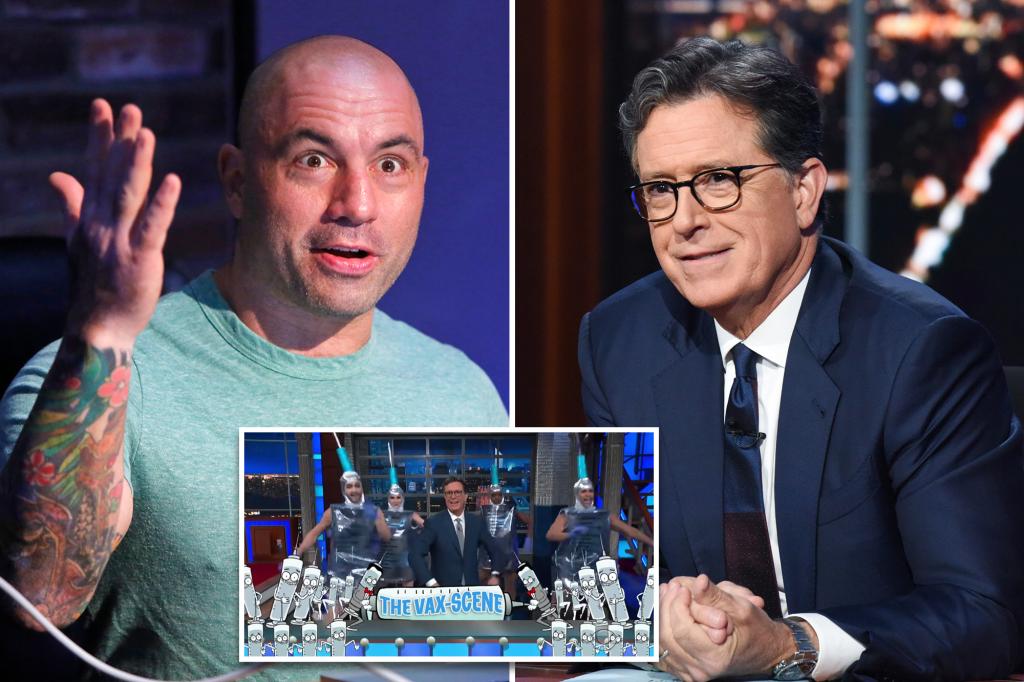 Joe Rogan took aim at Stephen Colbert on an episode of his Spotify podcast on Wednesday, calling the CBS night star “weird” and criticizing his camaraderie with top Democratic Party officials.

During an interview with MMA fighter Jake Shields, Rogan also touched Colbert for a skit on his CBS show that featured dancers dressed as syringes doing a song to promote the COVID-19 vaccine.

Colbert is, according to Shields, ‘cringe’.

Shields then mentioned a June 2021 skit on Colbert’s “Late Show” featuring “The Vax-Scene,” a dance troupe dressed as vaccine syringes.

“The vax thing, you’re like oh my god this is so hard to watch!” said Shields.

“The vaccine songs! That was strange,” Rogan said.

“I want to be in the meeting where they pitch that. Like here the thing is ‘We’re going da-da-da-dada-da vaccines!’ Like where’s the joke? Where’s the joke? Are people going to watch this?”

When Shields wondered if Colbert is “lucky” or if it’s “just like the money,” Rogan said, “I bet it’s definitely very lucrative. He gets a lot of money.”

The podcaster then went on to mention a viral video of New York Democrat Colbert and Senator Chuck Schumer dancing and high-fiving at a charity concert last summer.

“There’s a video of Colbert dancing with Chuck Schumer and they high-five each other,” Rogan said.

He added: “They’re giving a high-five and Schumer is dancing outside with a mask on.”

“As if this is going to go down in history, like this time — this is like a mass psychosis,” Rogan said.

The conversation between Shields and Rogan initially turned on Colbert when the podcaster said that “if I was born in another era, all my jobs except stand-up comedian wouldn’t exist.”

“You’d probably do a late-night talk show,” Shields noted. “Think how awful that would be.”

“Otherwise you have to be like Stephen Colbert,” Shields said, adding that it was “sad” to see what has become of the former Comedy Central star.

Colbert has made no secret of his pro-democracy leanings. Last month, he criticized his bosses at CBS for hiring a former Trump administration official, Mick Mulvaney, as an on-air commentator.