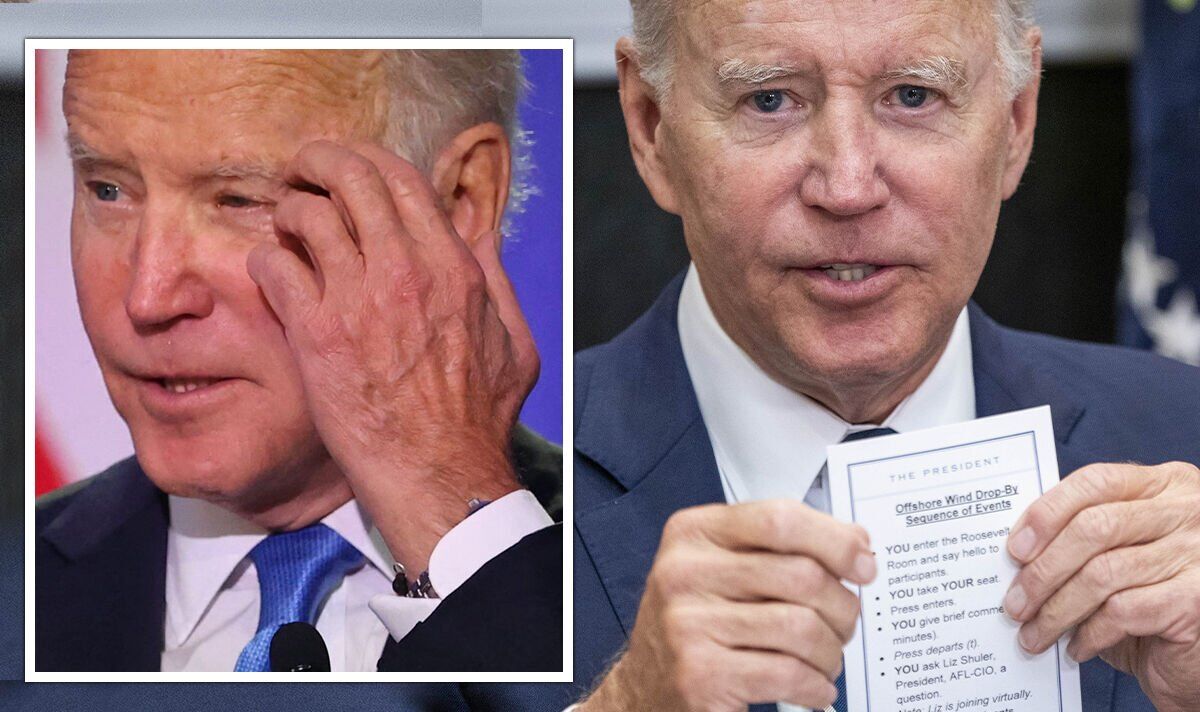 The instructions on the cards were specific enough to say “YOU take YOUR seat” and “say hello” to guests. Biden has previously been mocked for gaffes, and polls have shown many Americans are concerned about the president’s “mental acuity.”

Biden regularly uses cue cards for potential press inquiries or meeting minutes, but the curiously specific nature of this most recent cheat sheet has left the president’s mental state questioned.

Political commentators took no time to toast the president on Twitter.

He said: “There should be emergency hearings on the 25th Amendment next year.”

The 25th Amendment refers to a cabinet’s ability to remove an incapacitated person.

Commentator Andrew Malcom said: “We’re so screwed: Joe Biden accidentally reveals his step-by-step notes on how to act, what to say – ‘Enter the room and say hello. Take a seat…'”

Others pointed out that the simple instructions could be a sign of cognitive decline.

“This tells me he has severe cognitive impairment. I think it’s extraordinary.”

READ MORE: EU hesitates in Austria as MORE THAN HALF don’t approve of membership

The instructions begin by telling the president to enter the Roosevelt Room and “say hello to the participants.”

They continue, “YOU take YOUR seat, the press comes in, YOU give brief remarks… minutes, the press leaves, YOU ask a question to Liz Schuler President, AFL-CIO.”

The cue card ends with “YOU thank the participants, YOU are leaving”.

Mr Biden was previously embarrassed by staff notes, including one that read “Sir, you have something on your chin.” The president also held this note up incorrectly – towards the press cameras.

There is evidence that at least some of the American public agrees with them. In an ABC News/The Washington Post poll published earlier this year, 54 percent of Americans said they did not believe Joe Biden had the “mental acuity necessary to serve effectively as president.”

This marks a shift from 2020, when the majority of Americans, 51 percent, believed Biden’s mental capabilities were up to the task.

President Biden has reportedly been at odds with his staff in the past as they tried to control his message.

Earlier this year, when he said Russian President Vladimir Putin “couldn’t stay in power,” unnamed White House staffers quickly backed down the comments — telling the media that Biden was not discussing regime change.

Part of President Biden’s appeal during his political career was his authenticity and his ability to connect with voters through that authenticity.

However, that was somewhat suppressed by staff trying to protect the president from on-camera blunders.

NBC News reported: “The so-called cleanup campaign, he has told advisers, is undermining him and suffocating the authenticity that fueled his rise. Worse, it fuels a Republican topic of conversation that he’s not in full charge.”