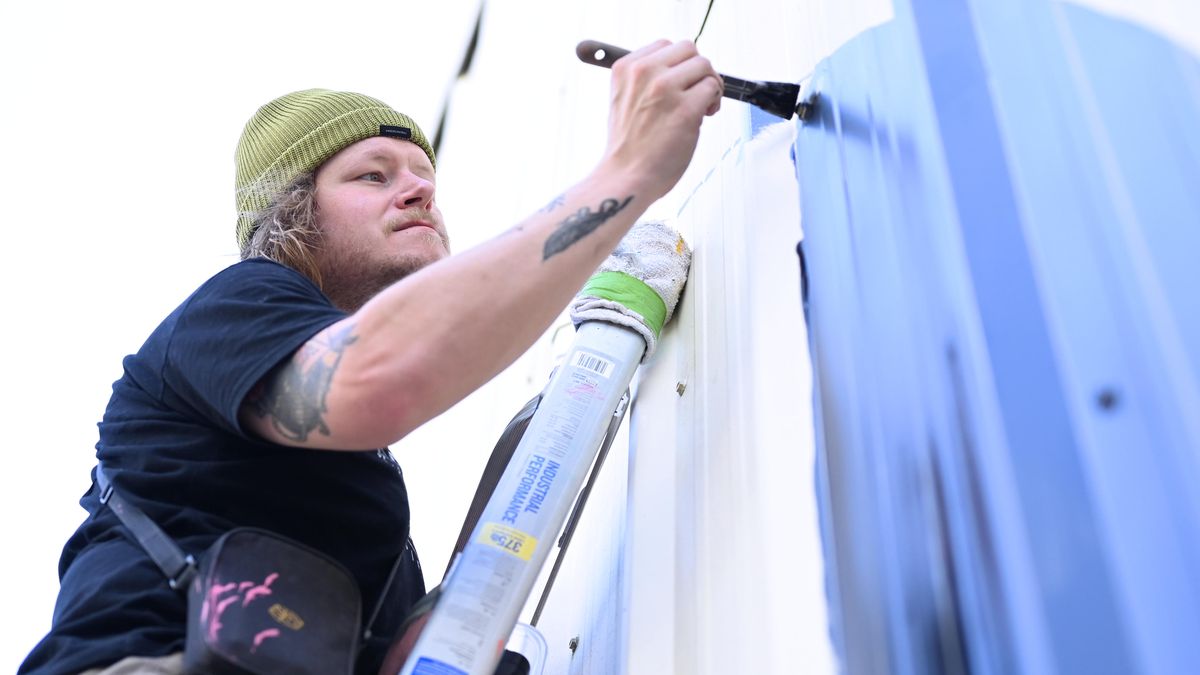 ST. PETERSBURG — When Jimmy Breen was selected to work on a SHINE mural in 2019, there were quite a few obstacles between him and the high blank wall that was his canvas.

The building, 1701 Central, was under construction and was right next to the highway. A protruding tree branch blocked its way to the building. Breen and his then business partner, Anthony Freese, had only one lift and limited time to finalize their design before the end of the festival. But Breen persisted.

“He just had such a positive attitude about things,” said Jenee Priebe, director of the SHINE Mural Festival. “He was the person who really believed that anything was possible. If you had a dream, Jimmy would help you get there, no questions asked.’

Breen and Freese folded many good omens into their pink, yellow and turquoise mural: a four-leaf clover. A horseshoe. One cent with the head turned up.

Breen died on June 20. He was 37 years old. His family declined to disclose his cause of death. They have asked people to donate to the St. Petersburg Arts Alliance in memory.

Breen’s life was filled with many things he loved to do. He was a prominent local muralist, splashing color on restaurants, businesses and walls around St. Petersburg. He opened his own advertising and design agency while working as an illustrator for major musicians and record labels, creating T-shirts and posters for Lizzo, Cardi B, Wu Tang Clan and the Grateful Dead. He made time to support the St. Petersburg chapter of Creative Mornings, a monthly breakfast lecture series designed to unite and inspire local innovators.

“He lived many lives in the short time he had,” said his sister-in-law, Dana Tafelski. “Awful as it is, I think he lived the life he wanted.”

Breen grew up in Indianapolis and then Florida, his younger brother Jason Breen said. Inspired by the Marvel Comics he bought with his pocket money, Breen started drawing at an early age. He was only 19 when he started a T-shirt company called Heartcore, but he soon earned a spot on the Vans Warped Tour, selling his clothes across the country. Numerous bands took notice.

“People loved his art and they loved his style and they wanted Jimmy Breen designs for themselves,” said his brother.

Subscribe to our free Top 5 things to do newsletter

Every Thursday we come up with ideas for going out, staying at home or spending time outdoors.

You are all signed up!

Want more of our free, weekly newsletters delivered to your inbox? Let’s start.

Discover all your options

Breen tried to study international business at the University of South Florida, but it didn’t stick. According to an interview Breen did with St. Pete Catalyst, a shift came after Fall Out Boy’s first album in 2003. Breen realized that the band’s label, Fueled By Ramen, was located on Hillsborough Avenue – the same street where he lived at the time. He walked to the office to introduce himself and let himself be responsible for the production of merchandise. That job led to later working for Atlantic Records and Warner Music Group.

Breen continued to create designs as a freelance illustrator for nearly ten years before deciding to take formal illustration training. He enrolled in the graphic design program of USF St. Petersburg. There he met Julia, who would become his wife.

“He was coming to arrange a movie night for all of us,” she said. “He would get snacks from the store or make a big dinner and we all ate together.”

Breen loved to travel with his wife and was enamored with their slack-tongued Shih Tzu, named Lil Uzi Derp. He was known for setting up a series of movie trailers and reality TV shows such as ’90 Day Fiancé’. He enjoyed good food, started ice cream and fought with his father-in-law to be the first to get the check.

And he loved starting his days in his hot tub.

“This is where he came up with a lot of his ideas,” says Paul Rose, Table Ski’s friend and a close friend of Breen. “He jumped in the hot tub and said, ‘Okay, here’s what I think.'”

One of those ideas was Wax & Hive, an illustration studio Breen co-built with Freese around 2017 and ran for several years. The team worked from a storefront adjacent to Chad Mize’s gallery on Ninth Street N.

“He had an idea to make it a community presence,” Rose said. “Within a year and a half, it was one of the largest privately owned illustration studios in downtown St. Pete for all the big cool new restaurants and everything.”

While in charge of Wax & Hive, Breen continued to work for Warner Music Group. By 2017, he had become a senior illustrator. The Dalai Lama commissioned him to produce flyers for the annual fund-raising campaign for Tibet House. More recently, Breen traveled to Willie Nelson’s estate in Luck, Texas, to create merchandise and art installations for the Luck Reunion.

Breen saved his desk work for the day and wobbled on high elevators to paint walls through the city in the early morning or late evening hours. “Make big art” was his mantra, and it featured in his murals portfolio: a pin-up with a half-skull face sprawled outside of No Vacancy. Melting smiley faces hover over Sunshine Kitty Catfe. Huge floating loaves of bread on the side of Lantmannen Unibake USA wholesale bakery, seen from Interstate 275.

“That was just his nature, to be, go, go,” said Tafelski, who also worked with Breen at Wax & Hive. “I think by just talking to him you could tell he always had a lot to do, and he loved it.”

Even when his days were full, he made time for the people he cared about.

“He was generous with so many things — with his advice, with his talent, with his time and his ideas,” said Tara Segall, founder of the St. Pete division of Creative Mornings, an international collective with more than 220 groups.

Segall had coffee with Breen over six years ago when she dreamed of starting a local chapter. He was the first speaker to book them, and over the years his connections around Tampa Bay have brought in many other speakers.

When he found out that Segall paid for the supplies out of pocket (all Creative Mornings events are free to attend), he threw up a merch table. Breen designed and donated T-shirts and artwork to raise money. It kept the group afloat for years.

“Our story, as special as it feels to us, isn’t that unique,” Segall said. Jimmy’s wife, Julia, wrote a sweet caption when she announced his passing, saying, ‘Jimmy has a way of making everyone feel special and seen.’ That is very accurate.”