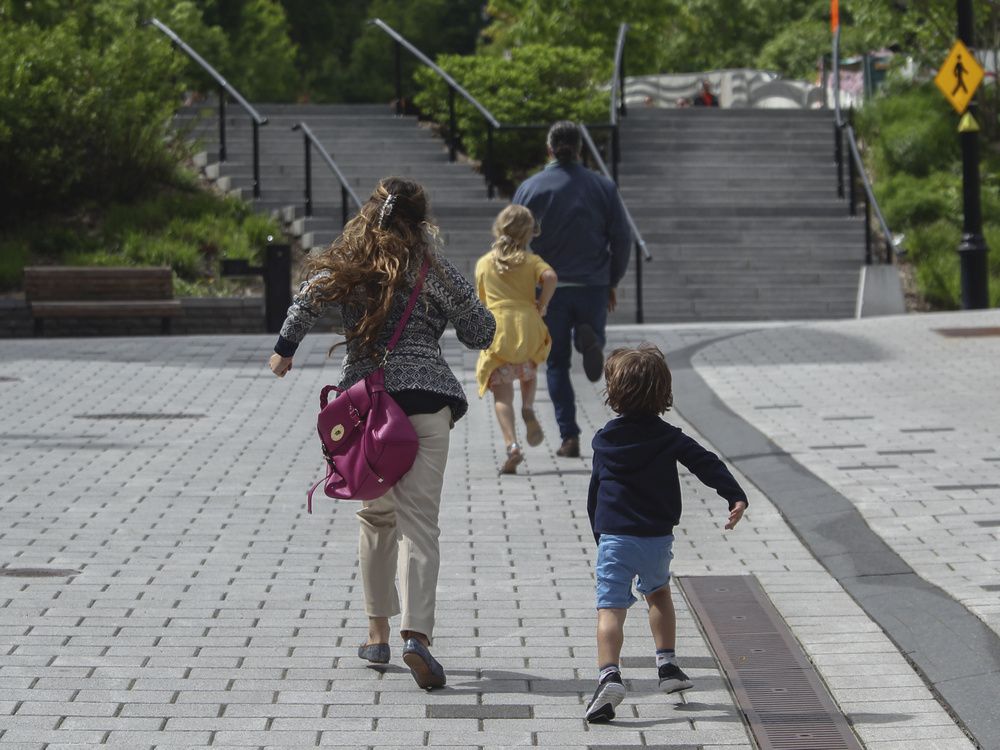 Also important in creating active communities is ensuring that parks, green spaces and outdoor recreational facilities (tennis, pickleball and basketball courts, playgrounds, outdoor gyms, dog parks, swimming pools and splash pads, skate parks) are included in the active transportation network. The easier it is for people to get to recreational facilities, the more minutes they gain over the course of the week.

Well-connected streets are important to get more people moving. By shortening distances to and from places such as parks, schools and shops and connecting sidewalks, lanes, bicycle and walking paths into one integrated network, walking and cycling become more efficient than using the car. Reducing the number of dead-end streets, connecting subdivisions through walking or cycling paths, and adding more intersections also gives individuals more route options, including avoiding busy arteries. With less traffic and fewer exhaust fumes to inhale, active transport becomes more pleasant. Also, it feels safer for families traveling through their neighborhood, making the decision to leave the car a lot easier.

Also important for getting people active is easy access to green spaces where they can kick a ball, fly a kite or just enjoy nature. Like walkability, greenery has been associated with greater amounts of daily physical activity. According to a 2014 Canadian study, residential green space was associated with increased participation in leisure time physical activities, a trend noted in high-, middle- and low-income communities. Playgrounds and parks that successfully integrate nature into their views or design have also been shown to promote greater physical activity and social contact than community spaces with a less green atmosphere.

Health and exercise professionals have been praising the health benefits of an intelligent and well-designed built environment with as few barriers to physical activity as possible for years. Study after study suggests that no matter where they are in the world, walkable cities have more active and healthier populations with less obesity and chronic disease, claims supported by the recent plethora of GPS data that doesn’t just track where people go, but how and when they get there.

But walkability and greenery are not only important in residential areas. A study of 147 women reported that working in walkable neighborhoods was associated with increased physical activity on the job, something to consider as companies look for new office space better suited to a workforce that is out of action five days a week. office.

Walkability and greenery in the neighborhood do not just happen. City planners need to partner with professionals who have expertise in maximizing the health potential of built environments so that they can formulate forward-thinking policies. Linking walking and cycling infrastructure to shopping and recreational hubs is just the beginning. Investments should focus on safety and accessibility for all age groups, income levels and physical capabilities. The unique needs of children, seniors, teens and people with disabilities must be considered, along with the challenges faced by low-income communities, who often live further away from green spaces and high-quality recreational facilities. And because it’s Canada, we need to think about how to build and maintain an infrastructure that’s functional during the winter months.

The potential to increase the daily activity level within a community is significant. Studies comparing communities with low versus high levels of infrastructure that support physical activity demonstrate the power of a consciously built environment. According to findings published by the International Physical Activity and Environment Network, people living in walkable neighborhoods accumulated 35-41 more minutes of exercise per day than people with lower walkability scores.

With more and more cities reshaping their communities to make them increasingly pedestrian-friendly, it’s time to get everyone on the same page when it comes to creating a more active and connected population. Judging transport connections solely on the basis of car and bus traffic is old-fashioned thinking. Creating or adapting built structures in a community to make physical activity greener and more accessible begins with the collaboration of multiple municipal units, including transportation, urban planning, and parks and recreation.

Citizens should also become advocates for safe, efficient active transportation within their own communities, talking and working with their elected municipal representatives to drive change. The not-in-my-backyard attitude to change must be replaced by a proactive approach that extends to all corners of a community. A modern, walkable city does not have to promote active transport, but invites it by design.