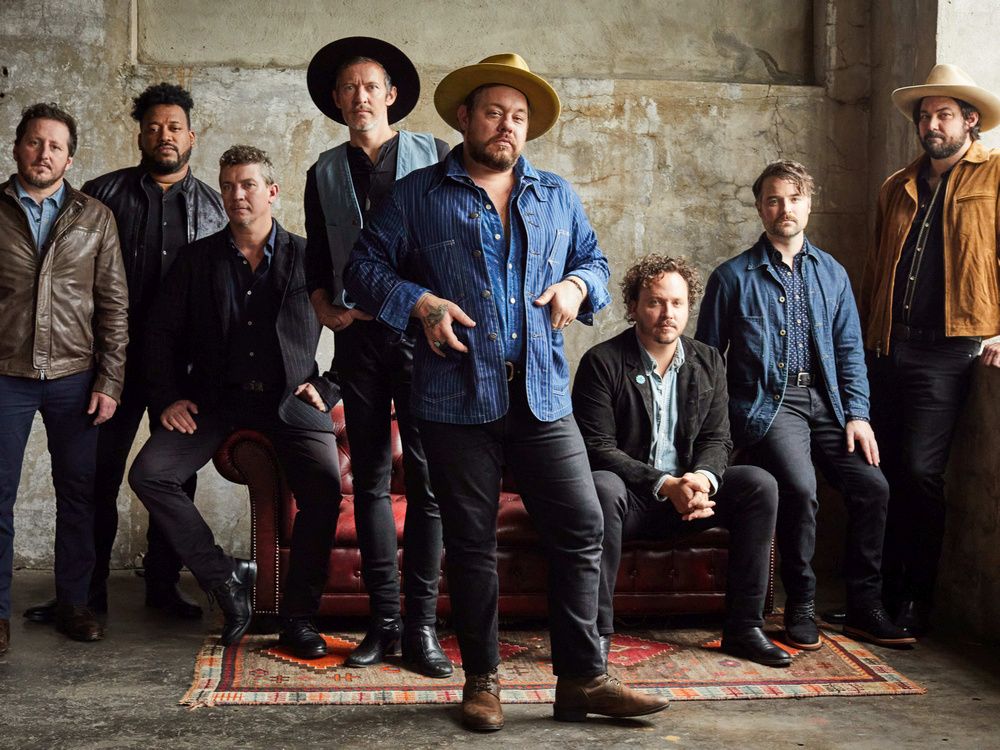 Nathaniel Rateliff comes to Montreal to play the international jazz festival, headlined by the big open air show on Tuesday. But his visit here will likely include a trip to the cemetery.

In a recent telephone interview from Lewiston, NY, where he was due to perform, the American roots rocker spoke about his major musical influences.

“At first I really wanted to be known as a guitarist, so I was in love with Jimi Hendrix and Muddy Waters and a lot of blues players,” Rateliff said. “I bit my teeth into that. At the same time, I discovered Bob Dylan, Leonard Cohen, and eventually The Band and Bob Dylan together, then The Band records. Also many (legendary Southern soul label) Stax artists. Lots of southern and northern soul and R&B. All those things have had a big impact on me.”

When he’s in Montreal, he said he might pay tribute to one of those great influences, Cohen.

“I usually take a little walk to visit his grave (when I come to Montreal),” Rateliff said. “It will be July 4th when I get there and a good friend of ours, our producer (Richard Swift), passed away on July 3rd four years ago, so I’d like to do something to try and remember him. So I’ll probably walk through the graveyard that day. Go to Mount Royal and go hiking.”

Cohen is buried in the Shaar Hashomayim Congregation Cemetery on the side of Mount Royal.

You can hear all those influences in Rateliff’s music, both on his folk-flavored solo records and on the more rocking full-band albums with the Night Sweats. I told him that the last album with the Night Sweats, The Future, reminded me a bit of Dylan’s most recent gritty bluesy record, Rough and Rowdy Ways.

“Well, his last record was a good record,” Rateliff said.

Rateliff had done well with his earlier solo drive, but it was the release of the first album with the Night Sweats in 2015 that attracted a much wider audience. Jimmy Fallon had seen a YouTube video of the band and fell hard for them, inviting them to his late night talk show to perform their inspiring soul song SOB. Suddenly they were a much bigger deal.

“I was surprised,” Rateliff said. “When I made the Night Sweats record with Richard Swift, it felt really good to me. It felt like people would respond. But you get that feeling with a lot of records and there’s no guarantee that people will get it or like it. We released it with the same excitement and attention as we do anything. But it was definitely a surprise when people clung to it.”

Many of the songs for The Future were written during the COVID-19 pandemic. The singer-songwriter says the dark times, due to both the pandemic and the bitter divisions of American politics, colored the lyrics. A good example of this is Survivor, which was a hit on both sides of the border last year. He had started it a few years earlier, but its meaning changed as the world around him changed.

“I first started working on that song when I was finishing up the second Night Sweats record, Tearing at the Seams,” Rateliff said. “During the time that I was going through a lot of personal stuff, I was going through a divorce and I originally related it to that. When I revisited the song during the pandemic, the context had changed for me and it was not so much about that previous relationship, but about talking about the (Trump) administration at the time, or maybe not just the administration, but a make a statement that ‘we are survivors’.

“There is a lot of pushing for political and religious ideals that I do not agree with. It’s quite difficult here. Pretty terrifying. It’s like, as an American, where are you going? … The lack of separation between church and state is increasingly becoming a problem here. We have such a conservative Supreme Court. I’m not sure what to do. Maybe I’ll try to move to Nova Scotia or Quebec.”

Nathaniel Rateliff and the night sweats play a free open-air concert on the TD Stage at the Place des Festivals on Tuesday, July 5 at 9:30 PM

The 42nd Montreal International Jazz The festival will continue until July 9. Visit Montreal for program, tickets and more informationjazzfest.com.