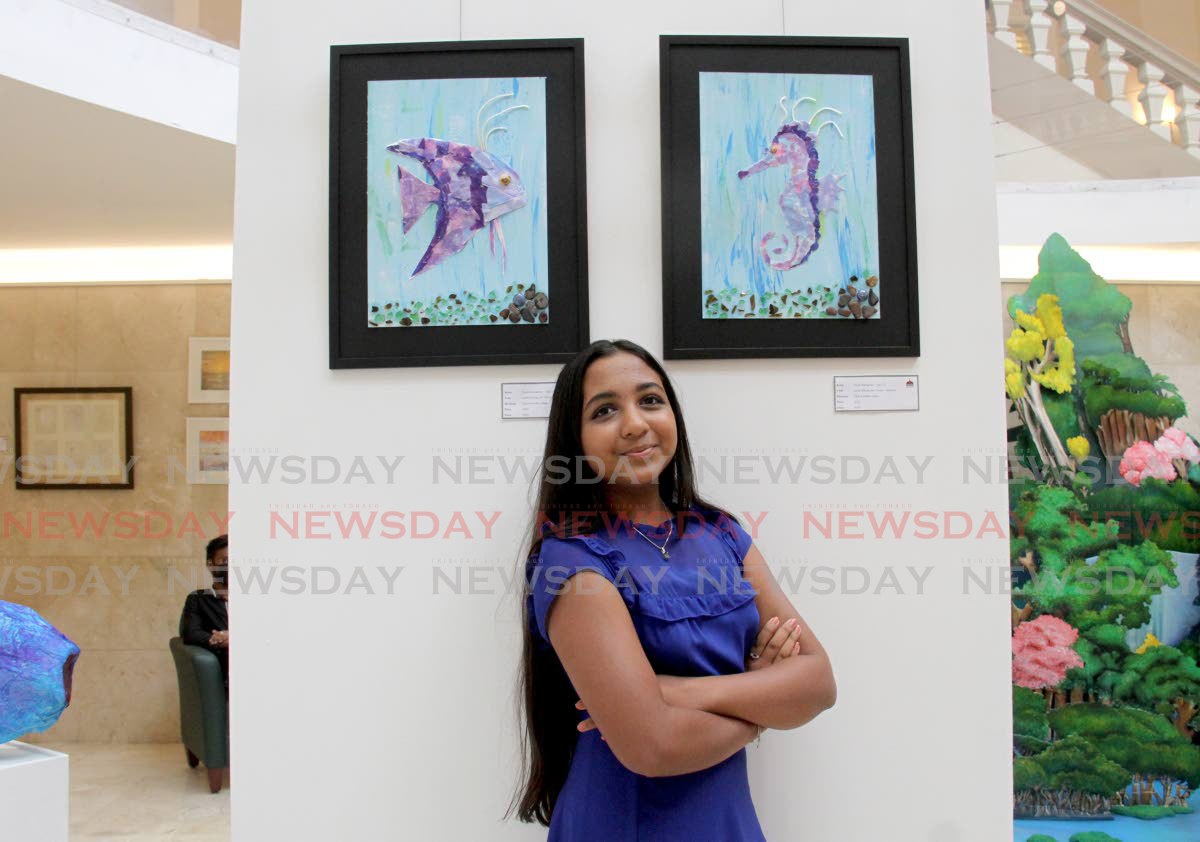 Saving the Earth is a huge task that one person cannot do alone, but 12-year-old Jayda Ramjattan has decided to try it anyway through her artwork.

Jayda has a strong passion for protecting the environment and wildlife as she wants to ensure that the planet remains habitable for future generations. On Thursday, she showcased three artworks of marine life affected by pollution at the Rotunda Gallery in the Red House, Abercromby Street, Port of Spain.

When asked what her inspiration was for such a heavy topic, she said: “I looked at my environment around me. I’m a farm girl too and I have my own free-range chickens, but I would do anything to make the world a better place.” make it for our future.”

Jayda’s mother, Meela Rampaul, reminded her of the tour they took around the Red House while waiting for her SEA results, which fueled her drive.

Her mother said: “We came to see what Parliament looked like and then we came across the art exhibition. When she looked at the art exhibition here, she told me she was inspired and wanted to work on pieces to submit.”

Jayda’s pieces were called UnMASKing the Ocean, Angel Fish and Jellyfish. The Grant Memorial Presbyterian School student, who lives in New Grant, Princes Town, explained that all of her pieces were made from disposable masks she collected from friends and family.

“This repurposing technique will make the world a better place and I will do everything I can to support that.”

She made sure all masks were properly sanitized before assembling her artwork. Jayda said the pieces on display, which are also for sale, took about six hours in two days to complete.

“For the jellyfish, I used pieces of confetti and two different types of face masks, the N95 and colorful disposable masks. For the contaminants, I used broken glass that my dad helped me get and rocks.”

Jayda added that the stones she used were those she collected while traveling around the country with her parents. She said she is trying to make these trips a weekly activity and with the help of her parents she cleans and polishes the rocks before use.

She said she spends extra time adding detail to her pieces carefully and that she spends at least 20 minutes or more carving the masks into different shapes to give her work a more vibrant look, as well as to make people think. to put.

“I used the filter for the first layer of the animal shapes and the pieces I cut were placed on it. The roughness of each of them describes the harsh impact pollution has on the environment. That’s why I put them on layered that way.”

Jayda has also competed in other Earth-themed art competitions, and she recently placed third in one organized by the Office of Procurement Regulations. This competition allowed children aged 8-12 to create a poster showing how companies can sell sustainable procurement or public property. She built a green supply chain made from recycled materials such as newspapers and magazines for color. Her poster showed many methods that can be used to achieve sustainable management worldwide.

Besides art, Jayda considers herself an all-rounder and likes ‘a little bit of everything’. In addition to raising her chickens, she dances, sings, plants and makes her own jewelry. She has been doing ballet and modern dance since she was five, but only recently stopped due to the covid19 pandemic. As for her singing, she took part in the San Fest 2019 urban category, where she won many awards.

Jayda said that planting only came naturally to her because she loves the environment and now harvests what she has grown. She said she mainly planted lettuce and tomatoes, and because of their abundance, her family has salads almost every day.

Jayda plans to keep herself busy as much as possible until her SEA results are revealed and hopes she attends her first choice, Parvati Girls’ Hindu College, Debe.