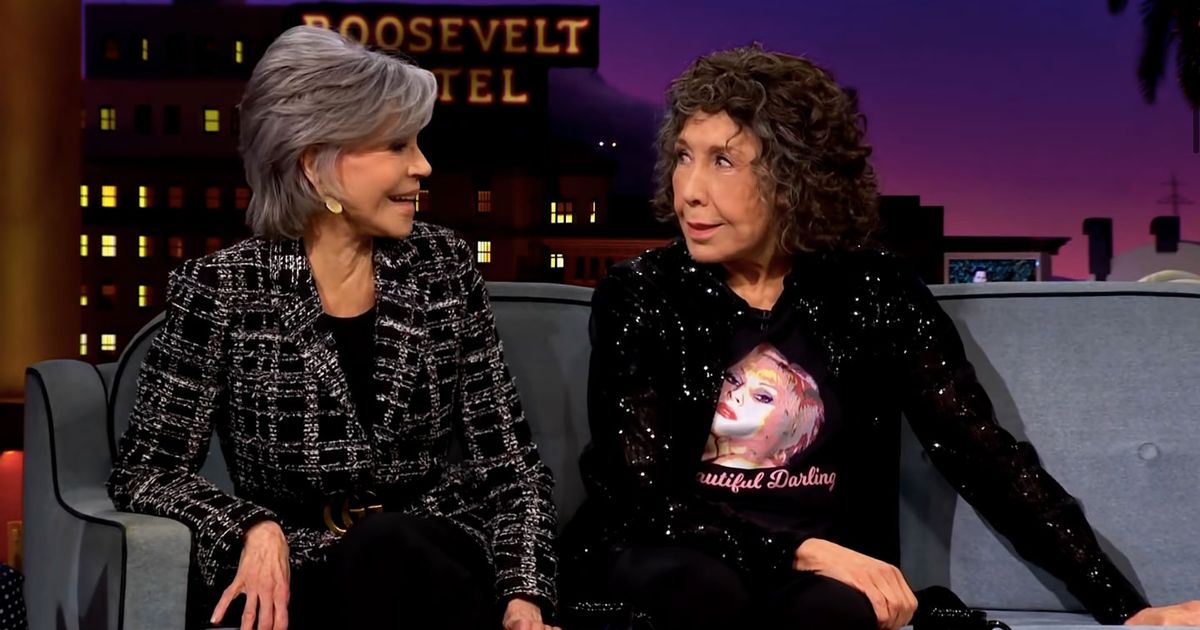 Fonda and Tomlin on The LateLate Show.
Photo: The Late Late Show with James Corden/YouTube

Late this week was marked by the announcement that James Corden will soon be leaving the chat-o-sphere. Corden dropped the news just before its Thursday broadcast, and it was met with… well, whatever James Corden news is received online. He may be Twitter’s punching bag, but people are watching Carpool Karaoke. Those certainly exist. And the show’s monologue section has become one of the funniest late night ones. It’s turned into a really silly, irreverent hangout during these teasing times—almost more like a podcast recording than anything Carson has ever done. Who will take over from Corden? What is he going to do now? There are things in the air. But with the TV landscape changing and merging every day, there are always things in the air. Here’s what landed this week.


The highlight of any “Back in My Day” is the prop work. The smoking pipe, the stuffed dog, and this time a fool for a stupid writer with stupid jokes. Seth Meyers highlighted the one aspect of the blow that was underreported: GI Jane is hella old, and why does anyone even refer to it? Ian Morgan should be ashamed of himself! Anyway, bullying is bad, but dumbass removed from their original context are good. Like ear horns, they’re something that only happens in cartoons and cartoonish contexts, and that’s fun.


Harvey Fierstein’s new memoir packs a punch when it’s something as light-hearted and confessional as his nighttime performances promoting it. Fierstein came by WWHL with Matthew Broderick, a New York mainstay, to reminisce about going to a gay bar together. Fierstein also explained why he stopped cruising shortly before the AIDS crisis shook the world and stole so many lives. Spoiler: It involves a quote from Colette and jerking off several guys at once.


Quinta Brunson came by? The Tonight Show and told a tale of woe and horror and David Blaine. Apparently the adjacent wizard of Pussy Posse was doing “magic” with Brunson, somewhat against her will. Magicians are not to be trusted, and Blaine should seek out more enthusiastic participants for his magical nonsense. Here is the hope Abbott Elementary will be picked up for another ten seasons so that Brunson can remain charming on talk shows for years to come.


Mo Amer gave a beautiful Jimmy Kimmel Live! debut interview, and no less during the fasting for Ramadan. That’s impressive. Both Amer and Kimmel were working on very little sleep, after getting red eyes back from Jon Stewart’s Mark Twain Prize ceremony that morning. Amer told a great story about coaxing a racist when he worked at a flag store. It’s a testament to Amer’s charm that (1) the story doesn’t come across as boastful, and (2) the racist flag man didn’t understand what he was doing.


Jane Fonda and Lily Tomlin are GOATS. This cannot be denied. They worked on their erratic platonic life partner for all it was worth The Late Late Show with James Corden, giving sage advice on phone sex and sports commentary to Corden’s staff. The entire episode is cute, with the two bickering and getting raunchy in equal measure. Tomlin even forgets if she’s Grace or Frankie at one point. Tomlin told Reggie Watts (in response to perhaps his only sincere question ever) that: Grace and Frankie gave her the gift of not caring about her anymore. Tomlin who doesn’t care is worth ten other people who give their best every day.