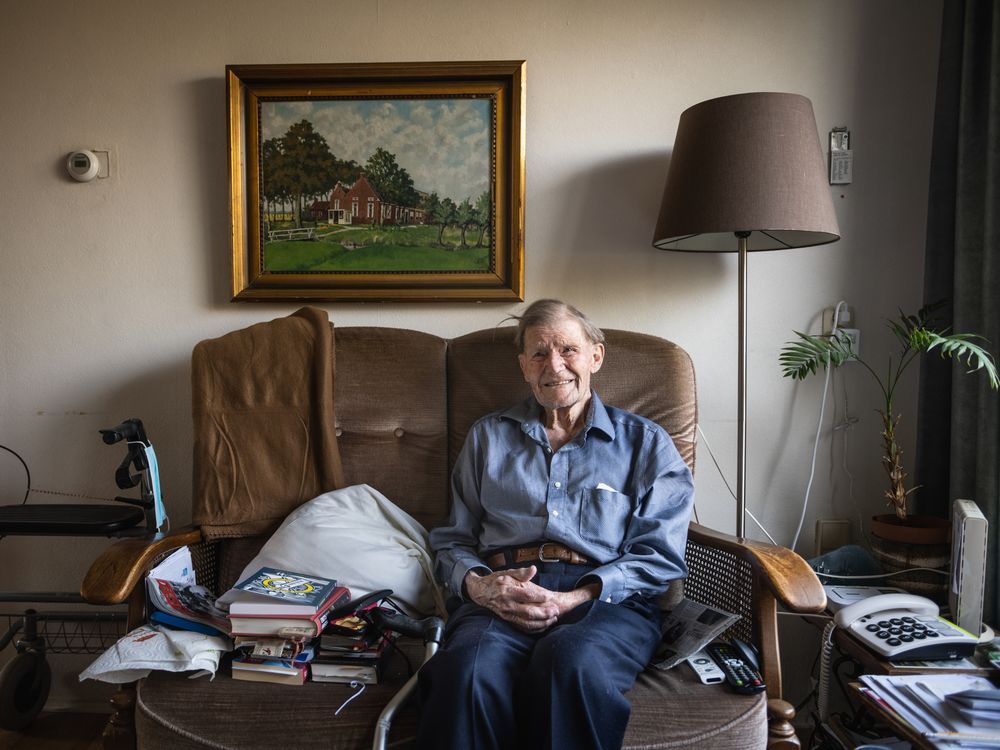 Jacob Luitjens, a Dutch-born UBC botany professor who lived quietly in Canada for years before being deported to the Netherlands in 1992 to serve a decade-long prison sentence for collaborating with the Nazis, has died at the age of 103.

Maarten van Gestel, a journalist from the Dutch newspaper Trouw who chronicled Luitjens’ story in a podcast released last year, said a caretaker informed him of Mr Luitjens’ recent death on December 15. Other details were not immediately available.

Stripped of his Canadian citizenship, Mr. Luitjens has been living in Lemmer, a town in the north of the Netherlands since his release from a Dutch detention center in 1995.

As the last Nazi collaborator imprisoned in the Netherlands for war crimes, Luitjens represented “the end of a chapter,” Van Gestel said.

Decades after being a fugitive, he became known as “the terror of Roden,” a reference to the city where he wore the black uniform of the Landwacht, or Landwacht, a Dutch paramilitary group that helped the Nazis arrest Jews, resistance fighters and other targets of the Third Reich after Germany invaded the Netherlands in May 1940.

More recent assessments of Luitjens’ life, however, have presented him not as the notorious war criminal suggested by his name, but rather as a person like many others of his generation who were drawn to National Socialism and served as functionaries in the Nazi device that killed 6 million Jews and killed millions more across Europe.

“I regret that at that time I had an ideology,” Mr Luitjens said in 1992 in a Dutch courtroom, “which I did not know would eventually lead to the murder of so many people.”

Jacob Luitjens was born on April 18, 1919 in Buitenzorg, in what was then the Dutch East Indies, now Bogor on the Indonesian island of Java. His father was a member of the Dutch Reformed Church and his mother was an Anabaptist, although they were not particularly religious.

According to Van Gestel, the family moved to the Netherlands in 1923 and settled in Roden, where Luitjens grew up. His father, a veterinarian who cared for the livestock of impoverished local farmers, became an influential and authoritative figure in the community.

In an article appearing this year in the Mennonite Quarterly Review, historian David Barnouw described Luitjens’ father as “a fanatical supporter of the Dutch NSB” and someone who “co-operated actively with the Germans during the occupation”.

Jacob, who was 21 at the time of the invasion, joined his father as a member of the Dutch Nazi party. So did a younger brother.

“It was communism or national socialism,” said Luitjens years later.

After his law studies at the University of Groningen, Luitjens voluntarily joined the Waffen-SS, the military branch of the German SS. He was turned away, apparently because of a deformity in his left hand and arm, a characteristic that would make him acutely memorable to the people he later arrested while serving in the Landwacht.

Luitjens was not accused of personally carrying out arrests of Jews, Van Gestel said. According to Van Gestel, his activities focused on members of the underground resistance and Dutch citizens who had gone into hiding to avoid forced labor in Germany, among other places. Resistance fighters he arrested were often taken to a villa where they were interrogated and tortured by the ‘Blood Squad’.

“People were very afraid of them,” says Barnouw, emeritus researcher at the NIOD Institute for War, Holocaust and Genocide Studies in Amsterdam, referring to the Landwacht. “They didn’t know the area and the Germans, of course.”

Less than 25 percent of Dutch Jews survived the Holocaust, according to the US Holocaust Memorial Museum, which described them as “damned” by “the ruthless efficiency of the German administration and the willing cooperation of Dutch administrators and police officers.”

Luitjens confessed to taking part in the pursuit of two people, a Dutch resistance fighter and a German military deserter, both of whom eventually died. But he insisted that he “didn’t personally kill anyone”.

When Roden and the surrounding area were liberated in 1945, Luitjens turned himself in on his 26th birthday. He was interned in Westerbork, a former Nazi transit camp that was then used as a prison for collaborators. The following year he escaped and fled to a Mennonite refugee camp in Germany.

In 1948, Luitjens was tried in absentia by a Dutch court, convicted of aiding the enemy in wartime, and sentenced to life in prison. By then, he had already left Europe and sailed from Germany to South America earlier this year with more than 750 Anabaptist emigrants, according to Barnouw’s research.

On board the ship he met his future wife, Olga Klassen, with whom he had three children. A full list of survivors was not immediately available.

Mr. Luitjens lived for many years as a devout member of an Anabaptist colony in Paraguay, initially under the assumed name of Gerhard Harder. He worked as a teacher and raised cattle, as well as providing basic veterinary services learned from his father. He became a “highly respected member of the community,” Van Gestel said, and believed he was dealing with his sins before God.

In 1961, Mr. Luitjens to Canada and ten years later he became a Canadian citizen. He studied ecology and biology, taught botany at the University of British Columbia, and was a member of a Mennonite congregation in Vancouver.

An investigation into Luitjens’ wartime actions was reopened in the 1980s as governments in Canada, the Netherlands and countries around the world came under increasing pressure to bring suspected Nazi war criminals and their associates to justice before age or infirmity made their trial impossible.

After years of legal wrangling, the Canadian government revoked Luitjens’ citizenship in 1991 because when he entered Canada and applied for naturalization, he concealed his membership in the Landwacht and his 1948 conviction. Luitjens claimed that no Canadian authority had asked about his wartime background and that he did not learn of his post-war conviction until more than 20 years after entering Canada.

In 1992, almost half a century after his original conviction, Luitjens was deported to the Netherlands and imprisoned in Groningen.

He was released after 28 months due to his age – he was 75 at the time – and in light of the lesser sentences served by many Nazi collaborators convicted of similar crimes.

Immediately after the war, Van Gestel said, many Nazi sympathizers in the Netherlands were treated with “unexpected grace” because “the country had to rebuild and people had to live with each other again”. Luitjens’ father and brother were among the collaborators who were imprisoned and released in those years.

Luitjens was not allowed to return to Canada, nor was his Dutch citizenship restored, rendering him stateless. He lived in Lemmer, took care of his garden and went to church, the curtains of his house drawn.

When a reporter for the Ottawa Citizen interviewed him in 1997, he blamed “sinister Jewish forces,” in the journalist’s paraphrase of his anti-Semitic remark, for the turn his life had taken.

But in conversations with Van Gestel for about a year before his death, Luitjens turned out to be open to a certain amount of introspection. He did not fully denounce Nazism, but said he deplored the persecution of the Jews, and spoke obliquely of a desire to “leave behind” the “bad things” of the past.

In their last conversation last spring, Mr. Luitjens remarked that his story might offer hope that “a monster can become a normal person again.”