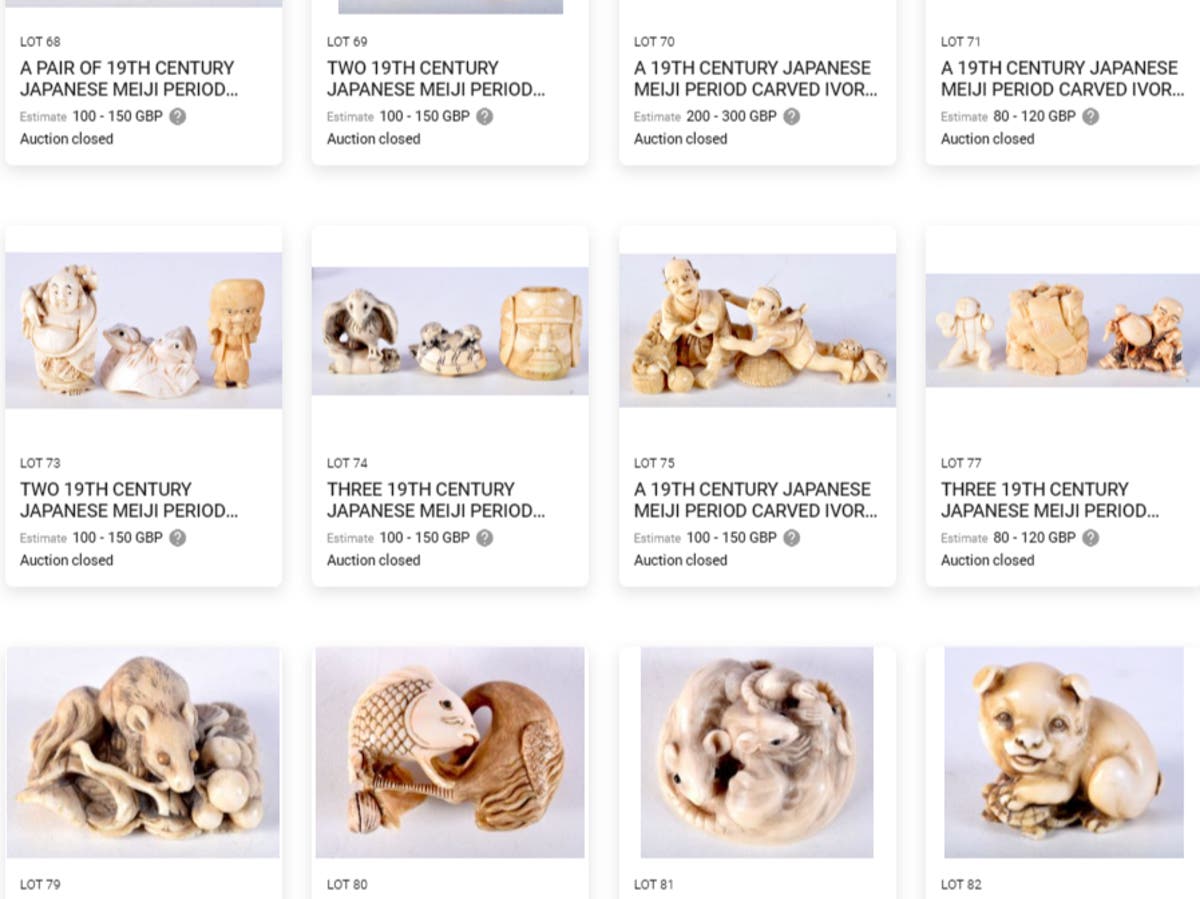 Auction houses sold ivory goods for thousands of pounds just days before a ban on the sale of such items went into effect, analysis shows.

Under the new law, which comes into effect today (Monday), anyone who buys or sells items made from the tusks of endangered elephants could face an unlimited fine or up to five years in prison.

But in the last two weeks of last month, dozens of dealers staged the sale of ivory, making an estimated £85,000 in profit.

More ivory was sold than in an average month before the lockdown, leading conservationists to suggest owners were unloading and cashing in their belongings before the ban went into effect.

According to conservation groups, about 20,000 elephants are poached for their tusks each year, causing populations to plummet dangerously.

Legal ivory markets provide a “smoke screen” to illegal trade, allowing newly poached ivory to be passed on as authorized.

After years of lobbying and several delays, the government finally passed the Ivory Law in 2018, and earlier this year ministers announced that from June 6, the import, export and trade of items containing elephant ivory would be banned.

Ivory owners were encouraged to turn in their items so they could be handed over to a government agency for safe disposal, to avoid re-marketing and fueling trade.

Thousands of items were handed in, from whole tusks to carvings, figurines and walking sticks.

But now an analysis by an independent expert shows that 165 UK auction houses benefited from the sale of at least 2,754 ivory items last month, for a total of £842,567.

Pete Matthews, co-founder of the Two Million Tusks organization that campaigns to save elephants, calculated from recorded sales that the auction houses combined made a profit of £64,416 that week selling at least 143 ivory items. . Some lots contain more than one item.

Earnings figures are based on average commission costs for both buyers and sellers, and other lottery costs.

On the last day of May, an auction house sold 123 lots of ivory, mostly Japanese and Chinese carved ornaments.

Ivory sales have been on an upward trend since the beginning of this year. While the sale was perfectly legal, critics said the increase in profiting from poaching of endangered species was unethical.

Louise Ravula, another co-founder of Two Million Tusks, said: “Ivory sales have been consistently around 2,000 lots per month, even since the publication of our ivory sales survey in 2017.

“Despite the ban, there has been strong demand for ivory within UK auction houses. The pieces are obviously horrific, as they caused the death of an elephant, but they are also aesthetically some of the ugliest pieces we’ve seen. They represent the true face of auction houses.

“We warmly welcome the overdue implementation and enforcement of the Ivory Bill 2018.”

A spokesperson for the Society of Fine Art Auctioneers and Valuers declined to comment on the numbers, but said dealers hadn’t done anything illegal and that the ban was unlikely to have any major impact on business, as they’d known for years that it would was coming.

Only items that are registered or have an exemption certificate are allowed to be traded in the future. To be eligible, they must be of “exceptionally high artistic, cultural or historical value”.

Animal Welfare Minister Lord Goldsmith said: “The landmark Ivory Act to come into force is a milestone in securing the survival of elephants around the world for generations to come.”

The government says it is considering extending the ban to other ivory-bearing species, such as hippos, walruses and killer whales, and will publish its consultation response this year.