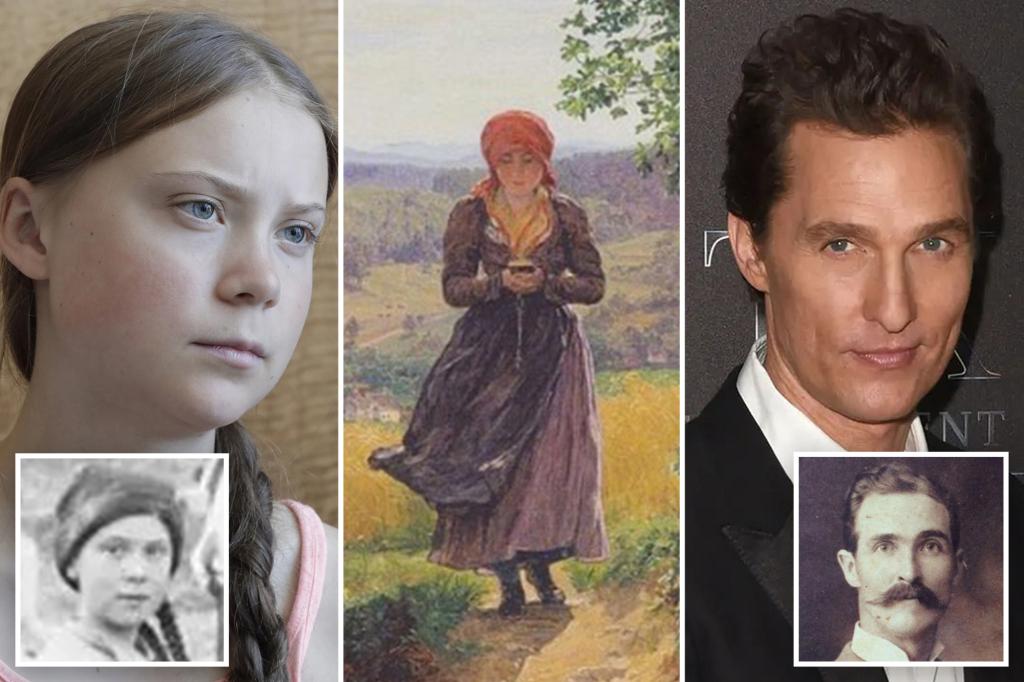 Many of us wish we could be celebrities in another lifetime – but maybe that’s already the case for a few rare people.

The internet is going wild with the far-fetched notion that A-list celebrities of our time have actually lived in years — or centuries — when vintage photos of their doppelganger ancestors have surfaced.

In addition, sleuths have seen other strange old images — such as a Civil War-era painting depicting a woman holding a smartphone — that only add fuel to the conspiracy fire.

Whether the celebrities in question have access to time travel or are really just timeless immortals remains unproven — but there’s no question that these images of the past bear an uncanny resemblance.

Take a look and you decide:

Matthew McConaughey in the 19th Century

Here’s what we love about this Matthew McConaughey theory: We get older, he stays the same age.

The “Free State of Jones” actor caused a stir after a photo surfaced of his 19th-century impostor, Dr. Andrew Sanders – a pipe smoking birdwatcher from Alabama in the 1800s.

“I know it’s hard to believe in the Photoshop era that this hasn’t changed, but it’s really original,” Parker said. “I think Redditors do a pretty good detective job. They would definitely find me. And my family isn’t smart enough to try that (fraud).”

Greta Thunberg on the border

How dare you maintain that climate activist Greta Thunberg was still alive 124 years ago!

The young Swede advocating for a better planet strangely resembles a girl in a black-and-white photograph that historians say was taken in 1898, when the Earth was much less subject to the effects of carbon emissions.

Thunberg’s lookalike is seen with two other children and what appears to be a dog as they work on the frontier just before the turn of the century.

Interestingly enough, the mysterious girl in the still image wears a braid like that of the young policy influencer of the modern age.

Is there something John Wick? can not to do? It hasn’t escaped the internet’s notice that Keanu Reeves has had many lookalikes throughout history — dating back to King Charlemagne around AD 800 — and they’re all cataloged on the website keanuisimmortal.com.

He has also been compared to 19th- and early-20th-century French actor Paul Mountet and closely resembles a 1500s painting of a mysterious man whose name remains unknown.

Perhaps the doc really went “Back to the Future” because the movie star Christopher Lloyd is eerily similar to former Vice President John C. Calhoun of the early 1800s.

An online animator has even pieced together a compelling gif of Lloyd morphing into the VP serving Presidents John Quincy Adams and Andrew Jackson.

Though Lloyd has some competition here, as online pranksters have also compared Calhoun to pro wrestler Edge’s likes and looks, in addition to the “X-Men” blue beast.

He stole the Declaration of Independence – and this man’s looks.

“National Treasure” star Nicolas Cage was seen as a reflection of a Bristol, TN man who lived in the 1870s, causing shock and commotion online.

The portrait of the 19th-century look-a-like was up for auction on eBay, with the seller starting to bid at $1 million, the Daily Mail reported in 2011.

“Nicholas Cage is a Vampire,” read the eBay page, referring to the actor’s lead role in the 1988 horror comedy “Vampire’s Kiss.”

Ironically, the second part of the “National Treasure,” “Book of Secrets,” revolves around Cage’s character clearing the name of his great-grandfather, who was framed for masterminding the 1865 assassination of Abraham Lincoln.

Rupert Grint and a Scottish painter

Looks like Ron Weasley learned a thing or two at Hogwarts.

“Harry Potter” actor Rupert Grint was seen as almost identical to the Scottish painter Sir David Wilkie, who lived in the 18th and 19th centuries.

Justin Timberlake and an old outlaw

He brings sexy back to the future. The 21st century pop sensation bears a striking resemblance to an old 1870s criminal, E! reported in 2016.

The idea of ​​Timberlake traveling through time was also mocked during his guest appearance on “The Graham Norton Show” alongside Daniel Radcliffe at the time, the outlet reported.

Again, did we expect less from the world’s greatest wizard?

Radcliffe has his own doppelganger who apparently likes to hang out with the impersonator Andy Samberg in the late 1970s.

A photo of the duo was found in a 1978 yearbook that was the focus of a since-deleted Reddit post, according to IB Times in 2013.

“What Andy Samberg and Daniel Radcliffe would have looked like in the 1970s (real photo, found in a 1978 HS yearbook),” the original post read.

The conspiracy theory has become so strong that a YouTube video has been created highlighting the detailed similarities in their appearance.

Others saw the likeness as a golden opportunity for Hollywood if Willis hadn’t announced he would be retiring due to the brain disease aphasia.

“And now it is very difficult for us to let Bruce Willis play Douglas Macarthur because of his illness, we could only pray for his safety and health,” Tweeted @AndCav4.

Though perhaps in the future, a digital AI doppelganger created for the former “Moonlighting” star could play the late General for him.

Eddie Murphya comedian from the time

Maybe the “Beverly Hills Cop” should investigate this one. Long Island-born comedian Eddie Murphy appears to be an exact match of a “classy man” in a straw hat — as he’s called online” — with an elegant hat and bow tie.

While not much is known about the origin of the black and white photo, the “stylish man” has identical facial features, mustache and all, to the “Shrek” star.

The only question that remains is whether the potential pastor also liked to party all the time.

A man in sunglasses wearing an Urban Outfitters-esque wardrobe raised 21st century eyebrows after appearing in a 1941 photo, sparking a legitimate debate about whether he was really from the future.

The out-of-place dude — standing around people wearing suits and old hats — attended the reopening of South Fork Bridge in British Columbia, Canada. He also attracted the attention of modern times because he had a camera that seemed too advanced for the time.

Although, a logical explanation has prevailed over its questionable nature.

The mystery man’s T-shirt belonged to the Montreal Maroons, a hockey team across the northern nation that had recently defunct, Snopes.com reported. As for the man’s camera, Kodak had developed a line of portable cameras as early as 1941, according to the paper. Glasses with protective side pieces were also a style worn at the time, although not widespread.

If those celebrity similarities haven’t convinced you, a vintage painting of a woman who appears to have a smartphone might.

Ferdinand Georg Waldmüller’s 1860 portrait “The Expected One” shows a lady walking through a forest path while holding a dark, hand-held object on which her eyes are fixated as if she were texting or having a scroll on social media.

Unfortunately, the reality is often disappointing.

“The girl in this painting by Waldmüller is not playing with her new iPhone X, but goes to church with a small prayer book in her hand,” Gerald Weinpolter, the CEO of the art agency austrian-paintings.at, told Motherboard.